The explosion of the internet opened the doors to a plethora of innovations that took the world by storm. It led to the proliferation of electronic mail or e-mail, which enabled people from different parts of the globe to communicate instantly. It gave rise to social media, which allowed people to share bits and pieces of their lives to one another. It also brought about the rampant adoption of eCommerce, which empowered online shopping and allowed merchants to expand their services over the internet.

With eCommerce quickly gaining widespread support from consumers worldwide, the need for a more efficient logistics sector in merchant operations has become evident. With an upsurge of product demand from consumers all over the world, companies that embrace eCommerce have found great use for third-party providers of logistics services and Magento developers so that they won’t have to worry about meeting the logistic demands of their customers.

There are several technologies that help companies jump onto the eCommerce bandwagon. For instance, Magento is an online platform that allows companies to easily and quickly create online shopping websites through which they can sell their products. There are also so-called third party logistics (3PL) companies that provide a highly organized logistics service which businesses can seamlessly integrate into their operations. These technologies and services make it very easy for merchants to dip their toes into eCommerce.

In this article, we take a look at Magento and 3PL and see how these two mesh together to make eCommerce a more achievable endeavor for all merchants.

Third-party logistics, commonly referred to as 3PL, refers to when a company delegates or outsources some of its distribution and product fulfillment functions to a third-party logistics provider. 3PL providers are typically involved in the storage or warehousing of products, their transportation between different sites, and the integration of these services into the overall operation of businesses. 3PL providers sometimes also provide additional services such as production and/or procurement of goods and products.

Released in 2007, Magento was created by Varien as an initiative to provide tools that would make it easy for merchants to sell their products online and for customers to buy their products. In 2011, popular online shopping website eBay announced its investment in Magento. In May 2018, Adobe acquired Magento for USD 1.68 billion.

Magento comes in two versions: Magento Open Source, the free, open-source version where the developer community can freely contribute to the project and extend its features and functionalities, and Magento Commerce, a proprietary version with extended and enhanced features for a premium price. The commerce version itself comes in two versions: a platform-as-a-service version, where developers can write, test, run, and manage Magento eCommerce applications via the cloud, without worrying about having to maintain the infrastructure on which it is running, and an on-premises version, which is the premium version of Magento Open Source but with additional features and full customer support.

While Magento provides an excellent platform that merchants can utilize to build their eCommerce systems, its involvement typically ends once a transaction is completed; it is not concerned with the actual delivery of the ordered products to the customers, nor the transport of these products to and from storage warehouses or suppliers. What will make it easier for businesses is if developers can integrate 3PL services directly into Magento, so that purchases and transactions readily flow to and from 3PL systems. Luckily, with the right developers, this is indeed possible.

Here are the benefits and downsides of integrating Magento applications with 3PL systems. 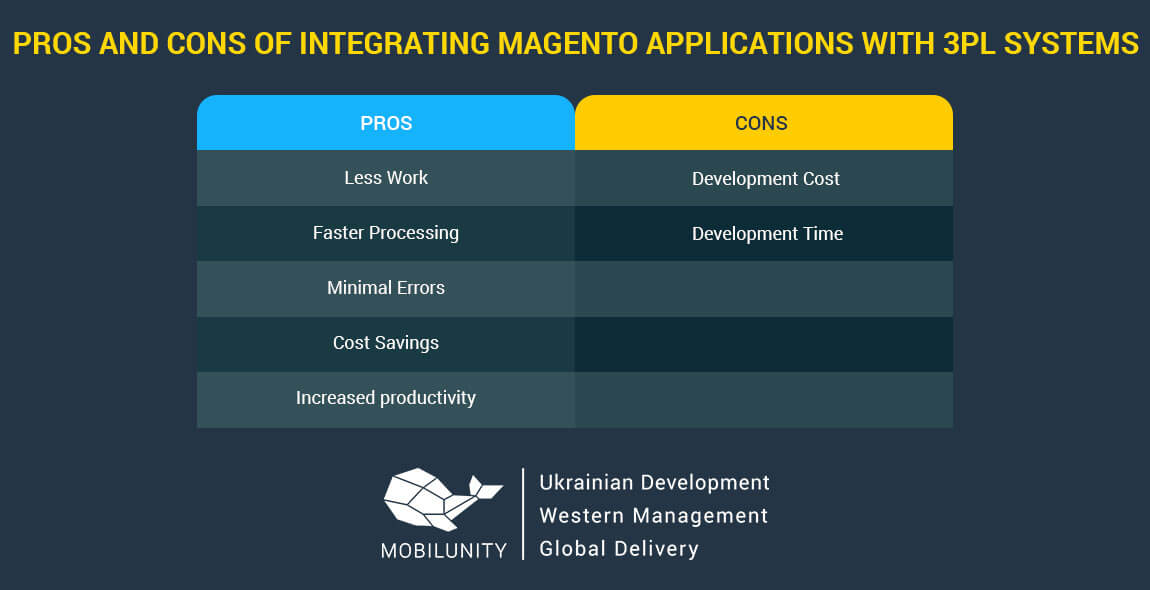 In 2016, Magento 2 was released as a major update to Magento. Here are some of the main differences between the two versions:

Businesses hoping to expand their reach and customers base should make use of the vastness of the internet, and one easy way to do so would be to use Magento to create an eCommerce website. Aside from enabling the quick development of eCommerce systems, it also allows developers to integrate these systems to third-party systems, which is useful for integration with third party logistics (3PL) providers to keep the data between the two systems constantly in sync. Therefore, to maximize the benefits of creating an eCommerce system, you should hire Magento developer who is skilled in integrating your eCommerce system with 3PL provider systems.

If you’re looking to hire Magento web developer or hire Magento 2 developer with 3PL integration skills, look no further! Here at Mobilunity, we’ve got just what you need. Located in Ukraine, we house Europe’s most talented dedicated developers who can quickly and easily build you your ideal eCommerce system with the best Magento developer cost. Not only do we offer the best and brightest developers in the continent, we also offer among the lowest rates in all of Europe! Hire dedicated Magento developer from us and you are sure to get the best service for the lowest price. With Mobilunity, you’re in excellent hands.

Contact us now to hire Magento developers for your 3PL integration to launch your business ahead of the competition!

How Much Does it Cost to Build a Mobile App for Events?

Are MEAN Stack Developers the Same as Full Stack Ones?

Hire Dedicated Developers in Norway vs Ukraine. Pros and Cons