Lit Up Your Project with a Ukrainian Windows Mobile Developer

The development of mobile applications is one of the fasted growing software fields in the marketplace. Both the demand for app developers and the average cost of app development have increased substantially during the past few years. In the highly demanding market, the Ukrainian mobile developers have emerged as the most competitive, qualified, and the most productive technical talents extensively sought across the globe.

If we look at the horizon of mobile applications, we see millions of mobile apps for different operating platforms such as Windows, Android, iOS, Amazon and Blackberry. The Windows mobile development is also growing fast alongside the Android and iOS app development. According to the Statista information, the total number of Windows mobile apps on the Microsoft Store has crossed the 669,000 number by the end of the first quarter of 2019, and it is counting consistently.

The new windows based mobile phones, tablets, gaming consoles, and other gadgets are being introduced in the marketplace. Microsoft has also introduced numerous platforms and windows mobile developer tools to make the Windows apps more competitive and profitable. The visual studio, support for the Objective-C environment, Team Foundation Services, and Visual Studio Online are a few examples of the important Windows 8 mobile developer tools and platforms.

Windows mobile phones are the third largest selling phones after Android and iOS. The market share of Windows phone was about 2.5% in 2015, according to the ‘The Verge’ information. A decline was observed in the share of mobile phones of all other operating systems but Android OS. The main reasons for the decline of windows phone included shortages of windows apps and device manufacturers.

There is an ample demand for windows app developers in the market. The main drivers of the Windows mobile apps developers’ demand in the market include the success of surface series books and tablets and Xbox gaming consoles. The total revenue generated through the sale of Surface series tablets is about $5 billion in the fiscal year 2019. Meanwhile, more than 30 million Xbox consoles sold in 2017. And the number of live Xbox users increased by 13% to reach 59 million users per month.

Meanwhile, the things are expected to turn around with the help of a strong push by the Microsoft, and its partners in device manufacturing. Microsoft is working on a big mobile project named as ‘Surface Mobile’, which is expected to boost the Windows mobile market. The surface series tablets and Xbox gaming consoles are already doing great in the market. So, the demand for the Windows mobile game developers and the app developers will remain in the marketplace.

There millions of Windows 6, Windows 7, and Windows 8 mobile devices are already on the market. All those statistics clearly indicate a substantial demand for the Windows Mobile 7 developers to cater the demand for innovative apps in the marketplace.

What Companies Hire Windows Developers the Most?

Like any other developers, the most of the Windows developers are hired by the software application development companies. In the present business ecosystem, almost every business is in need of at least one mobile application for all major OS platforms like Windows, Android, and iOS. The total revenue generated by the mobile application market in 2016 stood at about $88 billion, which is expected to reach $188 billion by 202. The number of Windows apps is much lower than the other platforms.

The following business areas require the Windows developers the most.

What Is the Future Prospect of Windows Developers?

The future of the Windows developers will directly depend upon the success of Windows phones, tablets, and gaming consoles. The success of gaming consoles, Xbox, and Windows tablets are good, but the Windows phones still lag in the success rate. But, the Microsoft Corporation is working with many device manufacturing partners to develop a new Windows-based phone. The future prospect of Windows developers is good due to the following facts:

All of the above factors attract the developers to choose for Windows app development for different devices.

Let’s have a look at the job responsibilities and the skill set of a few good Windows mobile application developer resumes required to successfully perform the desired responsibilities. 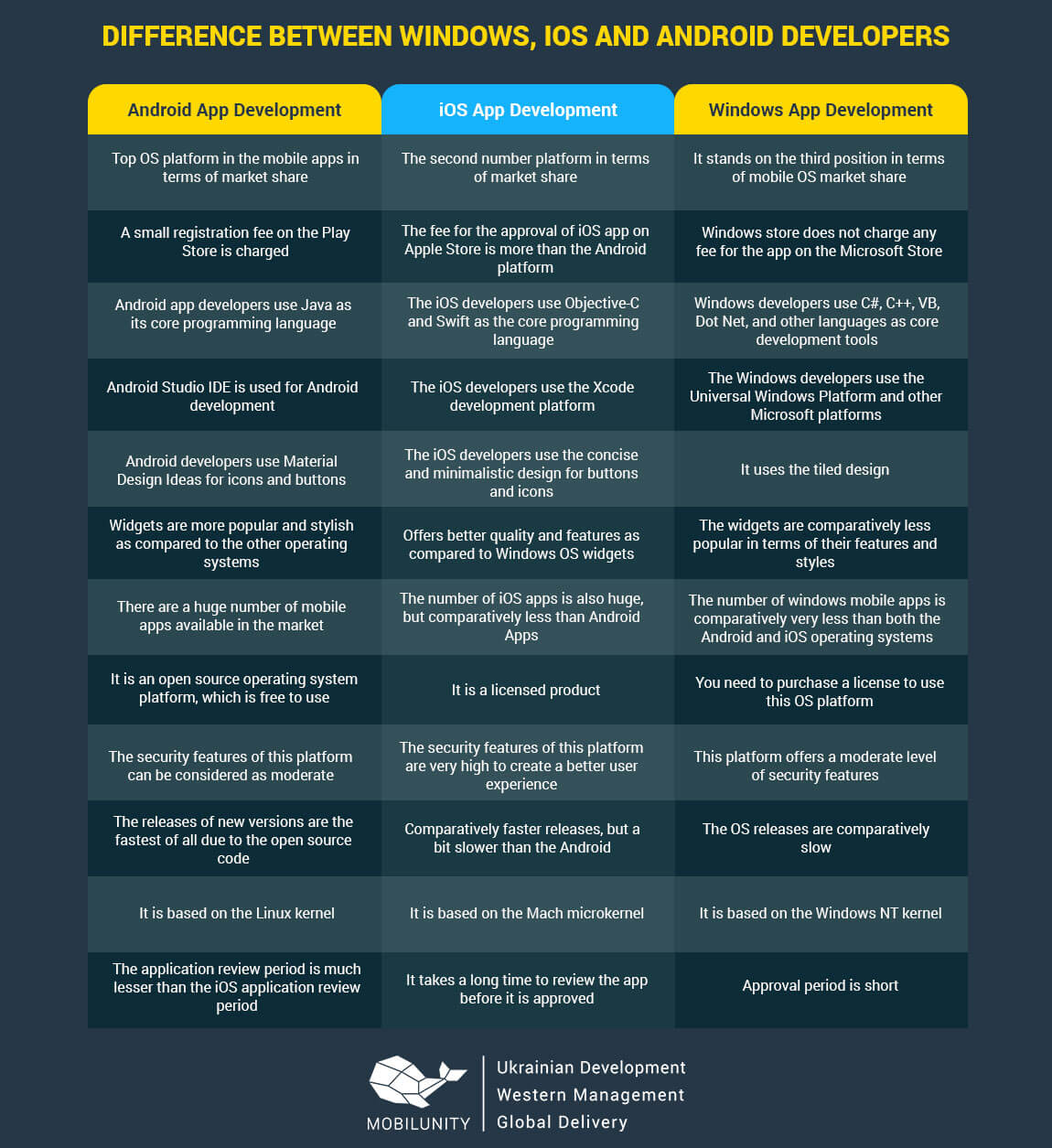 The Windows mobile developer salary varies region to region and country to country. Let have a look at the average salaries in different countries.

The Mobilunity Mobile App Development Company offers the professional grade Windows mobile app development services at very competitive prices. The company is located in Ukraine at the geographically central location on the globe. We offer:

If you want to benefit from the consistent growth of Windows mobile apps immediately, contact us now to get the perfect development services that you think of!

How to Choose CMS Development Platforms: A Comprehensive Guide