Home /  Blog / IT Staffing /  Is It True C# Is Not Cool Anymore? Should I Hire WPF Developer?

It is 100% true that technologies change very fast in the modern information age. The Windows Presentation Framework (WPF) and C# technologies have also evolved since their starting in 2006 and 2002 respectively. The demand for the role of a C# developer has been very high for many years now to create many kinds of desktop and mobile applications.

The WPF technology is getting more and more popular for a comprehensive software development for desktop applications, but that does not mean that it is an alternative to C#. Both of them are complementary platforms with small differences. So, we can combine them as C# WPF, not as C# vs WPF.

A large number of companies in the finance, manufacturing, and engineering sectors have already invested hugely in the WPF development for their desktop applications. That’s why the demand will remain consistent for many years to come. Many new tools are being introduced by the Microsoft Corporation to make it a one of the powerful platform in the desktop application field.

The company is focusing on the compatibility of WPF apps to be integrated into the Xamarin platform, which was recently acquired by Microsoft. So, the demand of WPF will remain consistent for many upcoming years. So, the WPF .Net combination is very powerful for the desktop application for Windows OS in the marketplace.

The main reasons for using the WPF platform are listed below:

If we compare the WPF vs WinForms development, we would suggest that a desktop app developer must deploy a standalone WPF application for better software application outcomes.

How to Use WPF with Other Technologies for Backend Development?

The WPF platform in combination with other MS technologies like .Net, C# and SQL technologies make the backend development for the desktop applications great. The addition of other tools supporting the backend software development is an ongoing process to enhance the effectiveness of this platform.

The WPF fully supports the power of .Net development. As we know, the .Net is a very powerful and versatile technology for the backend software development. There is a huge demand for local as well as remote WPF developers across the world. The .Net platform can easily be used as ASP.Net technology to create dynamic UI as well. The popularity of .Net Core is very high in the market due to its open source license and modular development approach. The .Net Native and ASP.Net play a vital role with the WPF platform.

The designing layout of backend software application is mostly done with the help of C# on the WPF platform. The combination of these two technologies unleashes the power of high-level backend software development. Any professional grade desktop application uses multiple technologies and tools on the WPF platform such as C#, SQL server, and other tools. The combination of C# and WPF makes a great foundation for desktop software applications. The role of C# language along with the WPF for the communication and network applications is amazingly great.

Difference Between WPF and Windows Forms

Many new web developers are confused about which one is better – WPF or WinForms for web developers in the present marketplace. Let’s try to find out the answer to this query by comparing the WPF vs WinForms. The major differences between WPF and WinForms are given in the following table. 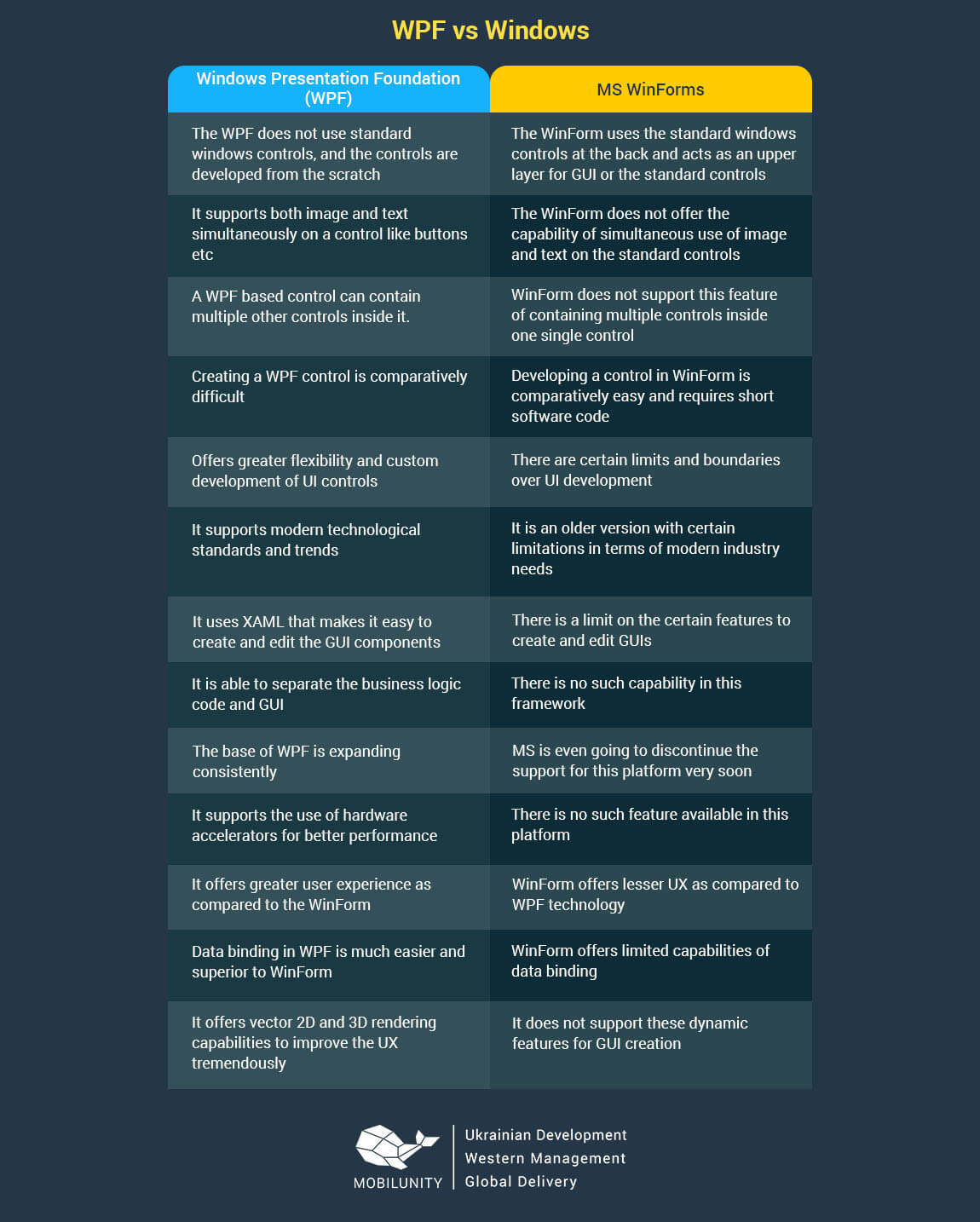 The major WPF developer responsibilities are listed below:

Major Skills of a WPF developer

A good WPF developer resume should contain the following skills:

The WPF developer salary varies country to country and region to region all over the world. Let’s have a look at the average salary of WPF developers in a few important countries.

The three levels of WPF developer resume samples in terms of the technical skills, professional experience, and academic qualification are mentioned below:

Let’s have a look at the top WPF interview questions commonly asked in an interview.

Answer: WPF is an acronym of Windows Presentation Foundation. It is a GUI development platform for the desktop applications commonly used for the Windows OS. This is a new platform, which will replace the existing WinForms UI control development platform. It offers more features, capabilities, and flexibilities to the developers.

Q #2: How many types of resources can be defined in the WPF programming?

Q #3: When we use the dynamic resources in WPF?

Answer: We use the dynamic resource in the conditions when the value of the property defined in the WPF resource syntax is required to change in the real-time environment.

Q #4: What is the purpose of using the value converter feature in the WPF framework?

Q #5: What you know about the MVVM used in the WPF environment?

Answer: The MVVM is an acronym of Model View View-Model. It is similar to the MVC presentation model pattern. This is a framework used for the desktop apps in the WPF environment. The main use of this model is that it separates the business logic from the UI elements.

Q #6: What is the main function of ICommand in the WPF framework?

Answer: The ICommand is extensively used in the MVVM for separating the ViewModel and View logic. This command separates the user interface from the business logic. This command uses two types of methods, which are defined by the users. One is Void Execute and the other is the CanExecute method.

Q #7: What you know about data binding in the WPF framework?

Answer: The data binding is a process in which the data is taken from one object and displayed to the GUI interface elements – single element or multiple elements simultaneously. WPF uses the XAML as the major technology, which makes it very easy to bind data from one object to another one as well as to dispatch to multiple UI elements.

Q #8: How many types of triggers are used in the WPF development environment?

Answer: In WPF environment 5 triggers are used. The names of those triggers include multi-trigger, property trigger, event trigger, data trigger, and multi-data trigger.

Q #9: What is the main purpose of using triggers?

Answer: The triggers are used to create the visual effects on the UI controls. The triggers monitor any changes in the property values and initiate the corresponding visual effect to show on the GUI interface.

Q #10: Can you please name a few ways of data binding between the binding source and binding target?

Answer: Yes. The data binding can be done in 4 major ways. They include one-way binding, two-way binding, one-time binding, and one-way to source binding.

The demand and the cost of the hiring WPF developers are very high in major markets of Western European and North American countries. So, the WPF developer remote contract is an ideal solution for the software companies in those countries to hire remote developers from countries like Ukraine, Russia, India, and others.

How to Get the Best WPF Developers?

If you are looking for benefiting from the professional grade WPF developers, we can help you here and now!

What is the Easiest Way to Customize an Invoice Layout Using Odoo?

The Role and Benefits of IT Consultants for the Business

Where to Find Reliable Front End Developers for Hire