Home /  Blog / We Do /  Who Is More Demanded: Aurelia vs AngularJS Developers

Who Is More Demanded: Aurelia vs AngularJS Developers

With the vast amount of JavaScript frameworks available today, it can often get overwhelming and confusing when deciding which one to use for your next project. Different developers have their own personal recommended JavaScript frameworks, and it’s easy to get lost amidst the different suggestions from different sources, but one important thing to do when deciding on which framework to use is to really understand when to use one framework over the other. In this article, we do a feature comparison for two JavaScript frameworks: AureliaJS vs AngularJS. Other comparisons, such as Ember JS vs Angular team, Angular vs React and Aurelia vs Angular vs React, are available on the web. We also discuss the opportunities to hire Aurelia developer.

Let’s take a quick glance at the background of these two frameworks to give us some context for our Aurelia vs Angular 2 comparison.

First released in 2010, AngularJS is now primarily being maintained by Google, so it should come as no surprise that it is incredibly popular. With 1,600 contributing developers as of time of writing, AngularJS has the largest community of developers among all JavaScript frameworks. With the release of Angular 2, a complete rewrite of Angular 1, its popularity soared even higher.

On the other hand, Aurelia is a much newer framework, having only been released in 2015. Interestingly, that this technology is developed by Rob Eisenberg, who was formerly an AngularJS developer, but left the team because he felt that AngularJS was not going in the direction he wanted it to go. An Aurelia vs AngularJS comparison would therefore be a fitting showcase of Eisenberg’s motivation to leave Angular and work on his own framework.

Angular vs Aurelia: Comparison of Features

Let’s do a feature-by-feature comparison of Angular 2 vs Aurelia to give us a clearer picture of their differences. 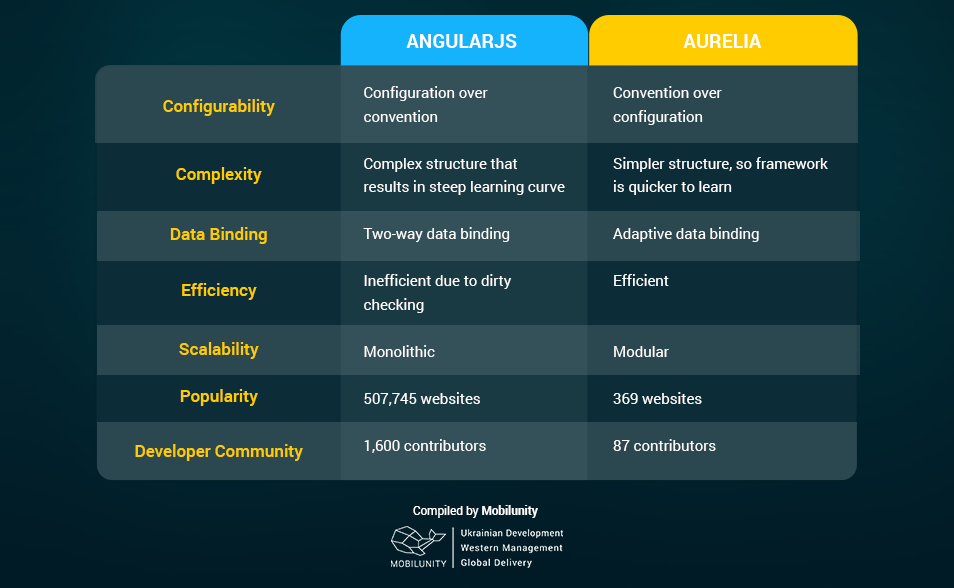 Angular 2 and React are two of today’s most popular Javascript frameworks throughout the developer community. Let’s see how Aurelia, a relatively less popular framework, fares against these two.

Aurelia vs Angular vs React

At the very beginning we have already mentioned that there are different comparisons of the above mentioned technologies with React. The main reason is that Angular 2 and React are two of today’s most popular Javascript frameworks throughout the developer community. Still, most likely that Aurelia can become even more popular than these 2 technologies in some time. Thus, let’s see how Aurelia, a relatively less popular framework, fares against these two.

Advantages and disadvantages of Angular, React and Aurelia

We’ve seen how the Aurelia framework, despite being a new framework that’s only beginning to form its user base, already offers Aurelia developers a lot of impressive and convenient features. These features are enough to make it stand out amidst other more mature and more popular frameworks. For a two-year-old framework, it is laudable for managing to gain serious traction among developers and becoming a big contender in the JavaScript framework space. The Aurelia developer community can expect a lot more in store for the framework in near future.

Infographics on the comparison of Angular and Aurelia JS frameworks

2017 has been a good year for this framework. Although its creator, Rob Eisenberg, joined Microsoft in September of 2016, he saw to it that development for the Aurelia JavaScript framework would not be compromised. Instead, he assured the Aurelia developer community that he will continue to develop, maintain, and improve the framework. In fact, just in October 2017, the official website of this technology has seen a major UI overhaul, where new features had been incorporated into the app experience. At the same time, Eisenberg also launched a new section for the site called Discourse, where Aurelia UI framework developers can share issues, discuss solutions to problems, and engage in general discussions.

With such active development and commitment from its creator, we should expect the framework to continue rising in popularity in 2019. We believe that Aurelia JavaScript will transform more web applications and bring even greater features to the hands of more developers.

We had a great chance to interview the Community Lead for the Aurelia Framework, Ashley Grant, and get answers to the most frequently asked questions. It is always interesting to know what the team thinks of the product:

It is a Modern JavaScript framework that, through its data binding system and focus on convention over configuration, allows you to focus on building what really matters: your app. The data binding system in Aurelia makes building applications that display and take in data extremely simple.

One of the strongest advantages of choosing Aurelia to build your app is how, through the thoughtful use of well-consider conventions, Aurelia allows you to focus on building your application, and not on tending the framework.
I think that one of Aurelia’s real weaknesses compared to other competing frameworks and tools is how Aurelia allows developers to natively use third-party VanillaJS libraries without always needing an “Aurelia wrapper.” This tends to lead developers to think that these third-party libraries can’t be used with Aurelia, when they often work without any wrapper at all.

Its popularity continues to grow as more developers discover us. Maria Naggaga, of the Microsoft’s ASP.NET team, told me that after her Ignite 2017 talk, the most common audience question she received was “Why was Aurelia removed from the default set of projects in the .NET CLI?” I was heartened to hear this feedback, as it shows how fervent our current user base is.

We are currently working to firm up our plans for Aurelia. We have a number of ideas, including migrating the framework’s code base to TypeScript, creating a solution for developers who desire single-file components. We will also be continuing the great work on our CLI and Visual Studio Code plugin. I’m really excited about new projects as a member of the Aurelia team!

One more Aurelia developer from Australia, Dwayne Charrington, has provided us with his feedback on this technology. Please check it below:

I first learned of Aurelia in January 2015 when it was announced by Rob, it was only an alpha version of Aurelia at that time. I was familiar with his work on Durandal and short-lived contributions on the Angular 2 team – Rob’s name has become synonymous with quality code and well-thought-out architecture. The first few projects I started building with it were tiny “familiarise myself” type apps. However, at my day job, I was fortunate enough to be in a position to choose what our future web stack frontend framework would be. My first serious Aurelia project which was over two years in the making was recently a couple of months ago.

Aurelia’s biggest advantage is its simplicity and intuitiveness. Rob’s vision has always been to create a framework that abides by real web standards put forth by W3C, WHATWG and so on. View-models are JavaScript classes, templates are HTML wrapped in template tags and the binding syntax uses simple conventions. The biggest disadvantage is the documentation (which has improved and continues to be improved) still pales in comparison to other frameworks like Angular or component-based libraries like Vue.

A forward-thinking, conventions based JavaScript framework that gets out of your way.

Whether you’re looking to hire an AngularJS or Aurelia developer, it would be wise to know the salaries of these Angular developers for hire in various countries to know which country offers the most practical rates. Let’s take a look at the typical salary of JavaScript developers, which include Aurelia and AngularJS developers, in different European countries. In this comparison, we use PayScale, which shows self-reported gross annual salaries. While such self-reported values may be inaccurate, they are nonetheless useful in comparing the relative salaries in different countries.

Here are the average gross annual salaries of JavaScript developers in Europe:

From the above data, it’s easy to see that Ukraine offers the lowest rates for JavaScript developers across Europe, so it would be wise to consider hiring developers from Ukraine.

We’ve explored AngularJS and Aurelia, two JavaScript frameworks that offer very different things to the table. One the one hand, AngularJS is a well-established framework with an incredibly large community supporting it, and on the other, Aurelia is a young JavaScript framework that’s only beginning to gain traction but offers a number of improvements over AngularJS. Whichever framework you choose, we’re here to help you out. We at Mobilunity offer IT professionals skilled in different technologies, including Aurelia Angular 2 and Angular 1. Located in the heart of Ukraine, we offer the best, dedicated developers at the most economical rates. If you’re looking for an excellent developer skilled in Aurelia Angular2 or any other technology, we’ve got you covered!

Still choosing between Aurelia vs Angularjs developers? Contact us to get the best matching programmer for your project!

Why is it good to hire Xamarin developers and designers in Ukraine?