Home /  Blog / IT Staffing /  Should You Hire Dedicated Developers in Lithuania?

Should You Hire Dedicated Developers in Lithuania?

If you are considering outsourcing or dedicated development model, it is always challenging to choose the right country to hire dedicated developers. Lithuania is one of the Central and Eastern European countries (CEECs) that joined European Union (EU) in 2004 and became a part of the Eurozone in January 2015. According to the Baltic Times, Lithuania might be the most affected country among the CEECs by Brexit because of the big number of Lithuanians actually living in the United Kingdom making 5,4% of the population there. Nevertheless, as Focus Economics states, the economy of Lithuania is quite good. It takes the 16th place in the IT skills ranking among EU countries according to the Measuring Information Report.

When it comes down to hiring dedicated developers companies are usually presented with two opportunities – hiring locally or turning to outsourcing. Now outsourcing has plenty of undeniable advantages so it is only understandable that most business owners these days are turning to this option. Usually recruiters who focus on IT outsourcing are trying to find options that would be both cheap and of a high quality. That is when outsourcing to other countries seems like a rational choice. One of the most appealing countries for such reasons is Lithuania that offers a wide range of top notch specialists who  demand comparatively low rates.

One of the developing industries of the country is information technologies (IT) sector. ZDnet states that IT sphere in Lithuania is evolving and demonstrates good rates of development. Indeed, 13 of the 20 largest IT firms in the Baltic States are located in Lithuania. Many international companies like Google, Bentley Systems, Nasdaq, AIG, Intermedix opened their offices in Lithuania as well, as ZDnet writes. Considering these facts, you may assume that the idea to hire developers in Lithuania might seem a good one to consider. 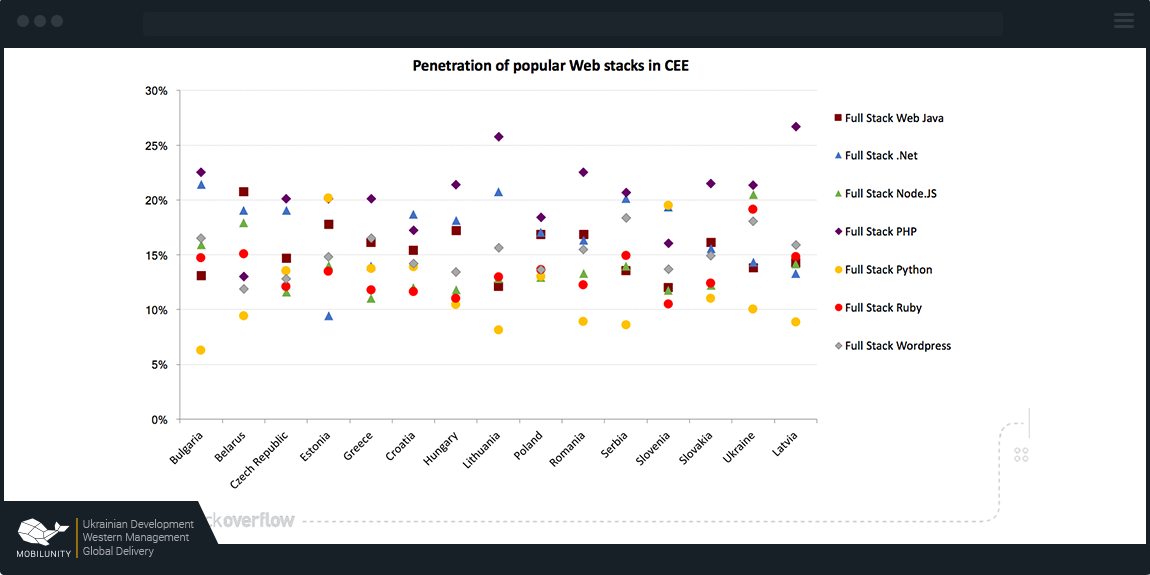 The report also suggests that Node.js and Node JS development teams become very popular in CEECs with Ukraine taking the the 1st place. 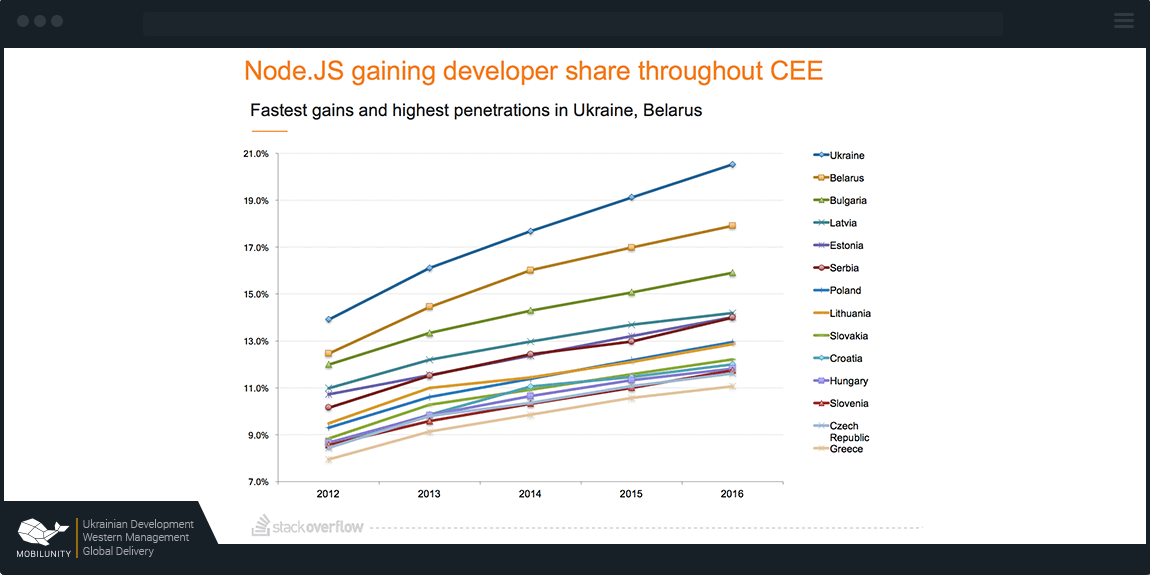 Penetration of Node.js in CEECs according to Stack Overflow Research (2016)

Outsourcing in Lithuania and Its IT Cities

IT outsourcing sector in Lithuania is valued at $60m. Global companies like Fujitsu, AstraZeneca, Omnitel, Swedbank, and Carlsberg group outsource to Lithuania, Clutch informs. However, Lithuania as well as other Baltic countries are much more expensive in terms of outsourcing their IT talents and skills in comparison to other post-Soviet countries such as Ukraine or Russia.

In every country with a well developed IT industry, there are the most popular IT cities with the biggest number of developers working there. In Lithuania, the majority of IT companies are located in Vilnius and Kaunas. The proportion of developers working in the capital city Vilnius makes 64% of IT experts, as StartUp Lithuania writes.

If you are hesitating about the idea to hire developers in Vilnius, the cost of their services will help you to consider this idea and decide whether it is a good decision. There are 27,000 software developers in Lithuania, as Startup Lithuania writes. However,as Ru.Delfi writes, Lithuanian IT sector faces a problem concerning developers pool, because IT experts prefer to be employed abroad and are leaving the country. So while you are trying to figure out how to start a remote team, there are a few things you need to learn about first. While looking for a team of dedicated developers, especially a remote one, you need to do a little research on the country’s economics, the one, that you are planning to outsource your team from. The thing is that most Eastern European countries are offering excellent specialists for a considerably low prices and a great deal of entrepreneurs seem to feel strange about it, believing that low prices mean low service quality. Luckily, it is not the case when it comes down to hiring Lithuanian developers.

An average salary of a dev in Lithuania makes $44,000 according to Dou.ua. Vilnius developer specializing in JavaScript earns $21,800 per year, as PayScale indicates. $22,000 is the average annual gross salary of a software developer in Lithuania.

According to PayScale, in Ukraine a web developer skilled in JavaScript gets $18,600 per year and software developer receives $13,200.

You can read more on salaries of Ukraine developer in our research.

If you are looking for a Vilnius dedicated team your new IT project, be prepared to higher time and money expenditures. If you are in a hurry and seek talented web developers for hire, check out Mobilunity. We offer flexible rates and high quality options for your business that would be convenient and affordable.

Contact Mobilunity and find out more about hiring a dedicated team of web developers from Ukraine.

Things You Must Know About Software Development Australia Provides

How to Achieve Success with Outsourcing Startup Development