Why Is the Mobile Development So Necessary?

Let’s face it: consumers are increasingly demanding mobility and accessibility from their favorite brands every year, and the use of applications on the run and even making a purchase without interrupting from business has become commonness. Companies that do not have high-quality mobile applications lose a lot compared to their competitors, its becoming vital to hire app developers to develop an app. Thus, the primary task of almost any business is to keep the consumer’s attention for the time sufficient to formulate a thought in consumer’s mind about purchasing of your product or service. For this purpose, personnel outsourcing services and mobile app developers Israel are needed.

All the applications are created for two basic operation systems, which are Android and iOS. Each of them has its peculiarities and popular technologies used.

The operating system iOS was introduced personally by Steve Jobs, it holds a leading position in the mobile device market. This system can be called the best one as it successfully gained the big part of the market, thanks to the popularity of the iPhone, which in turn affected the growth of activity and the development of such platforms as Android and Windows. The basic technology used by an iOS developer Israel is Objective-C. It is a simple language designed for object-oriented programming. Objective-C, as well as C ++ is an extension of ANSI-C and has support for such features as the description of classes, methods, and properties. Thus, the position of Objective C developer is highly appreciated in mobile app development.

Android, which is the property of Google Inc. continues to be no less popular mobile operating system. Its popularity is caused by the openness to both users and developers. Here are main technologies which are commonly used by Android developers Jerusalem: 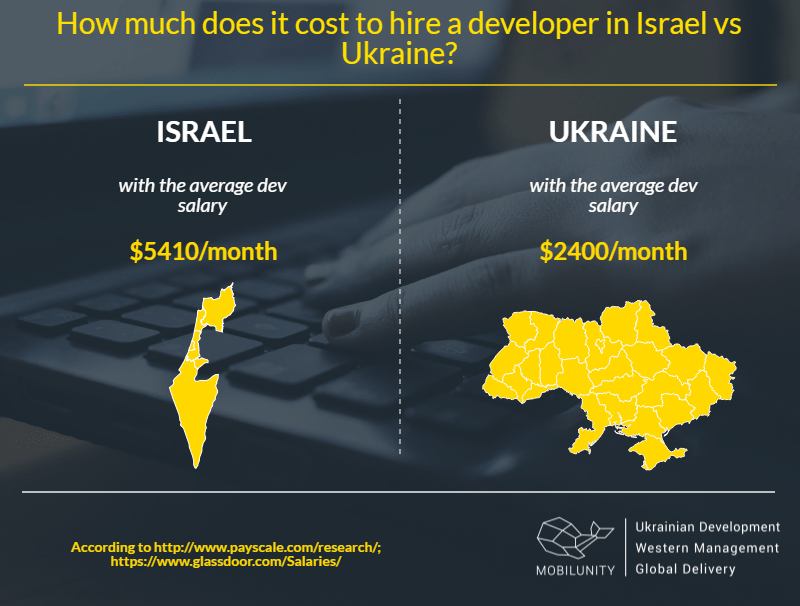 Comparison of net salaries of Israeli and Ukrainian developers

Average programmer’s salary in Israel is $5410. For comparison, the same Ukrainian developer salary will be around $2400. It is a good practice to discover salaries of dedicated app developers Israel in different locations. The main cities in Israel where mobile programmers are needed are Tel Aviv and Jerusalem. A PHP developer in Jerusalem earns approximately $3638. A JavaScript developer performs his work for $5497. Average monthly salary of a .Net developer will be at level of $6436. 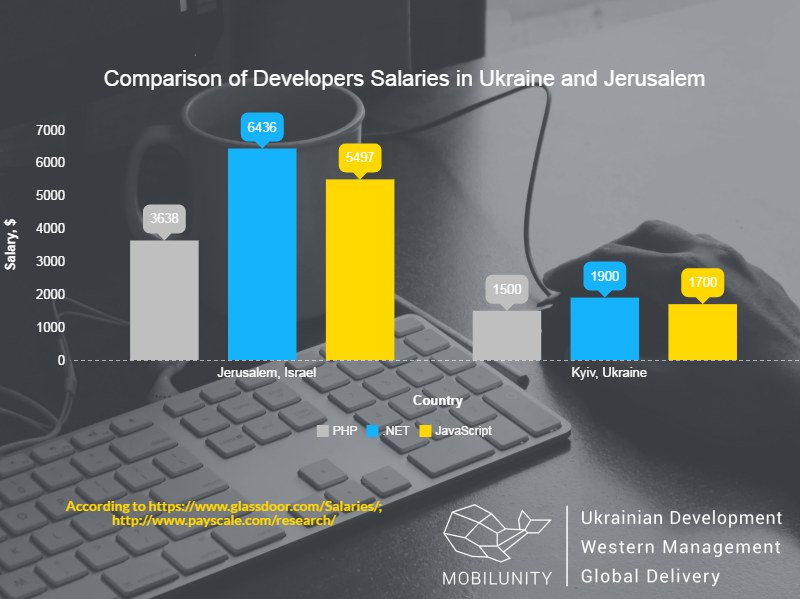 Comparison of net salaries of developers in Jerusalem and Kyiv

In his turn, a PHP developer in Tel Aviv receives $5037 per month. A JavaScript and .Net developer, as well as Swift salary is $4617 and $3678 as average. We can see that prices of app developers Tel Aviv are rather high, but they are still in the great demand. Talking about salaries of these specialists in Ukraine, it should be mentioned that a PHP developer’s rate is estimated as $1500; a JavaScript programmer earns $1700 and .Net engineer’s salary is $1900 per month.

After comparing wages of programmers in these two countries, it becomes obvious that it is no reason to pay more because high price does not always mean high quality and it makes sense to hire iOS developer in Ukraine. Hiring dedicated developers in Ukraine will bring you the best possible result and you will receive an opportunity to invest saved money in your next successful project.

You can consider hiring app developers in Tel Aviv, but will benefit from choosing our team! How? Get in touch and learn more!

What An Ideal Node JS Developer Resume Should Contain?

What Benefits of Staff Augmentation Can Help Your Company Grow

Is It True That Embedded Systems Developers Are Overrated?