Home /  Blog / We Do /  How to Find the Best Software Development Company in Italy?

How to Find the Best Software Development Company in Italy?

A huge demand of software engineer Belgium, Italy, England and many other countries in Europe soared to new heights during the past couple of decades. Being the fourth largest economy in the European Union, you can find a large list of software companies in Italy that contributes to the software development industry of the country and across the Europe and beyond.

The software companies in Italy contribute about 3.2% of the total GDP of the country with an addition of total market value of about €50.8 billion, according to the BSA software alliance report. Software development in Italy not only contributes to the country’s exports, but also contributes hugely to the improvement of the performance of the other local industries in the country.

The custom Italian software development industry accommodates more than 300,000 highly paid software developers and specialists in the country. Meanwhile, a large number of software outsourcing companies offer the employment to thousands of people remotely across the globe.

According to the BSA alliance information cited above, the software Italian developers are the highly paid professionals, which are about 50% higher than other service sector salaries of the country. A huge amount of about €10.1 billion is paid to the software specialists annually in the country. The business enterprises invest more than 7.5% in the R&D domain, which accounts for about €864 million.

The USA is one of the major investors in the software industry in Italy, according to the US Government’s export statistics 2017.  The Cisco systems Inc is investing over $100 million in the industry for the digitization of the Italian economy through the development of software tools and integrated communication systems.

According to the economic perspective report of the Italian market prepared by the Denmark Embassy in Italy, the software industry recovered from the global meltdown impact slightly in 2011 and it is improving continuously. In 2016, the software development industry of Italy noticed an encouraging growth of about 4.2% CAGR.

The total number of the companies related to the information and communication technology ICT is about 97,000 in 2016, as per the report cited above. A large number of those businesses are associated with the software development in the country. Some of the software outsource company also hires remote developers from other cheap countries of the world, especially from the Ukraine and other Eastern European countries.

The total software market size of Italy in terms of software developers stands at the 6th place among the European countries with a huge number of 292,586 software specialists. In terms of total revenue, the Italian software contributes about $50 billion per annum.

The Assinform Industry Association of Italy has predicted a growth of 2.3% in the overall ICT sector in 2017. Previously it was about 1.8 in 2016. The total size of the ICT market in 2016 was about €66.1 billion. The growth of software development is expected much more than overall ICT market growth.

The major sectors that will use huge volumes of software development will be robotics, artificial intelligence, research and development and education sectors. According to IBM announcement, the Watson Platform with an estimated investment of $150 million is being started in the Italy very soon.

The ICT industry is already facing acute shortage of software developers and other ICT talent in the local marketplace. According to THE LOCAL NEWS information, a huge number of over 76,000 ICT jobs with over 41.8% of the software developer jobs went unfilled due to unavailability of matching talent in the local market. So, the companies are using multiple hiring options, such as:

According to the LUX Innovative information, more than 30,000 software developer vacancies remained unfilled in Italy in 2016. The prospects of running a software outsource company are huge to extend its software development services to the companies in Italy. 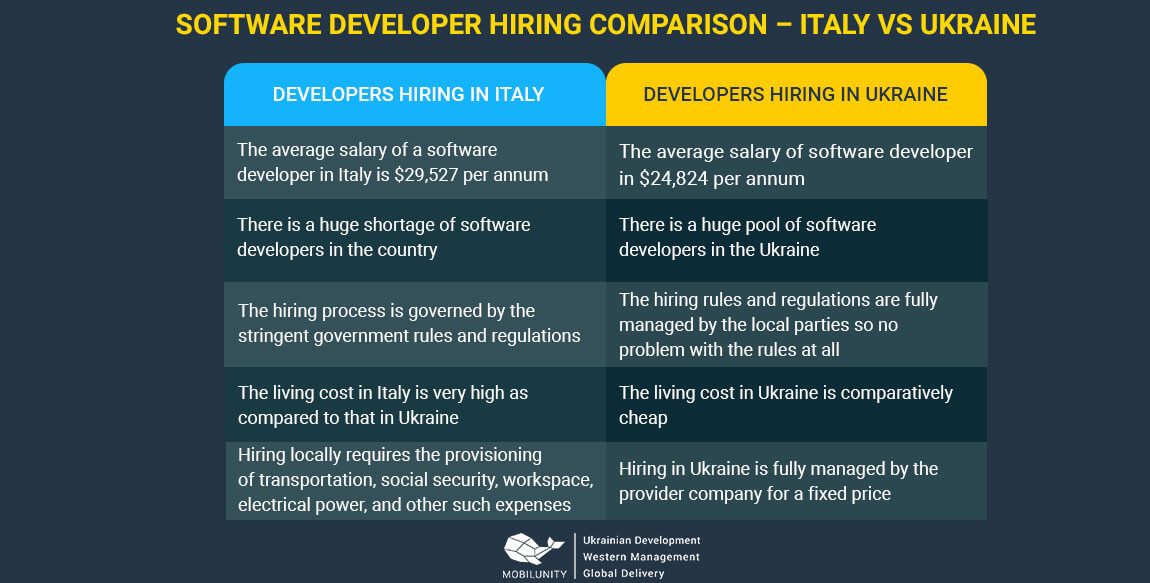 Ukraine has become one of the major software outsource hub for the major European and North American companies. A large number of software service provider companies like Mobilunity dedicated developers company have emerged as the provider of the top quality services to the clients in recent years. By choosing the services of Ukrainian companies, you get:

Hire Cobol Developer for Your Business

What Does It Cost to Build a Marketplace Website?

How to Protect the Android Application? Security Recommendation.