Home /  Blog / IT Staffing /  Are MEAN Stack Developers the Same as Full Stack Ones?

Are MEAN Stack Developers the Same as Full Stack Ones?

You may have heard about MEAN stack developers or JavaScript full stack developer and wondered what they are. To understand them, we first have to look into the structure of the web.

Web development has two major components. The first one is called the frontend component, which consists of everything accessible to the client side, or simply put, the user: the web pages themselves and everything on them, such as the text contents, buttons, forms, images and other media, as well as the behavior of all these web page components. In development terms, these are controlled by HTML, CSS, JavaScript, and all their libraries and frameworks. The other component is called the backend component, and it consists of everything that happens on the server side: all the logical processes and manipulations of the data acquired from the client side, and the storage and retrieval of these data to and from the database.

Unsurprisingly, these different segments of web development also require different tools and technologies to handle them. There are, for instance, different programming languages available to write backend code, and different database systems to store data in.

Web development that’s involved in both the frontend and backend components of web development is called full stack web development. The stack term alludes to the layered or stack-like structure of data flow through the web.

The MEAN stack is simply a set of technologies that may be used for full stack web development. 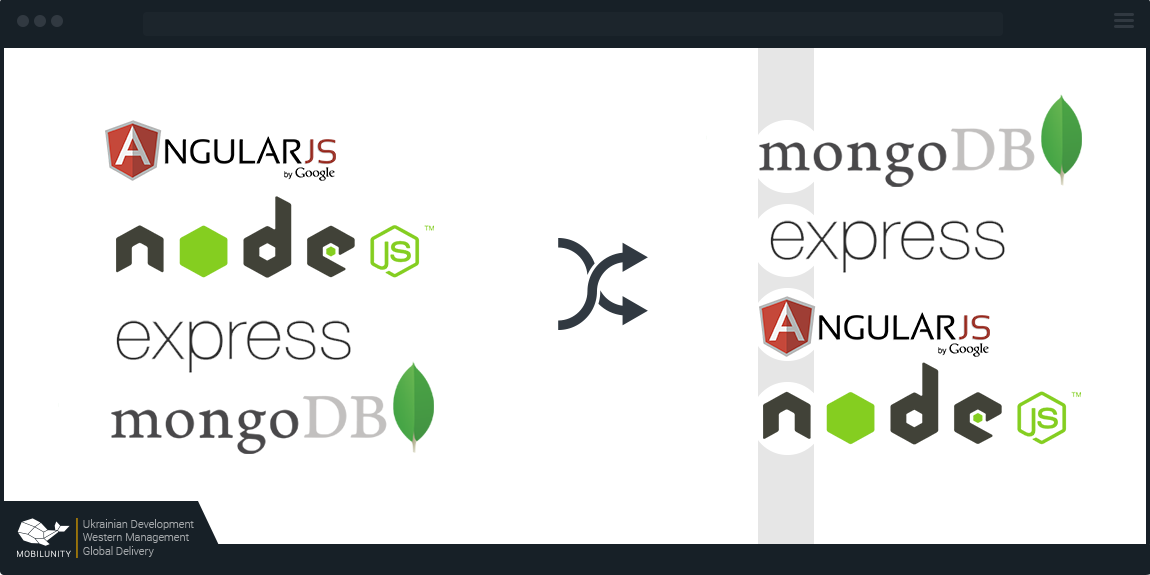 Technologies in the MEAN Stack

The name “MEAN” is, in fact, an acronym for the four technologies that comprise the stack: MongoDB, Express.js, AngularJS, and Node.js.

Note that the actual order in which these technologies are positioned in the stack, from frontend to backend, is AngularJS → Node.js → Express.js → MongoDB, so ANEM would be a more accurate acronym that captures its stack order, but MEAN is used as it is a more memorable acronym. With this in mind, let’s take a look at each of the four technologies in the MEAN stack in the correct order, and examine the roles that each one plays in full stack web development.

AngularJS is the only technology in the stack that’s part of the frontend component. It’s a framework for JavaScript, which controls all other elements on the site visible to users.

Stats on AngularJS from Github.com

Released and maintained mainly by Google in 2009, it has grown to be the frontend JavaScript framework with the largest community of developers, with 1,598 contributors as of writing.

Read our article on how to hire Angular JS developers.

Node.js is a JavaScript runtime environment, meaning it allows JavaScript code to be executed on the server side, where it can access and send instructions to the computer’s processor and memory. JavaScript was initially a purely client-side scripting language, meaning it could not be used to do backend codes, which are executed on the server side. Node.js expanded JavaScript’s power further by giving it server-side capabilities, and whereas JavaScript used to be restricted to the frontend component, Node.js extended its power to the backend world, thereby giving rise to the JavaScript full stack developer.

The most obvious advantage offered by Node.JS is uniformity of frontend and backend languages: since the same language can be used for both, it practically abolishes the wall that divided the two segments of web development. This directly translates to quicker and cleaner development. Moreover, it enables asynchronous programming, meaning it can perform independent processes without waiting for other processes to finish. This allows the program to scale to a large number of users, leading to large performance improvements compared to synchronous programming.

Check the list of CVs of Node JS developers for hire.

Just as there are many frontend frameworks for JavaScript to make the lives of developers exponentially easier, there are also backend frameworks for it. Express.js is a framework for Node.js, meaning it builds on top of the base language to provide developers with a rich set of features commonly used in web and mobile applications. It is the de facto framework for Node.js, meaning in practice, most of the developers who use Node.js for backend development also use the Express.js framework.

MongoDB is a database program and is among the most popular NoSQL databases, which are databases that store and model data in structures other than the tables used by relational databases such as MySQL. As opposed to the tabular structure of relational databases, MongoDB, being a document-oriented database, stores data as documents, which encapsulate all associated information corresponding to a specific database object.

As such, MongoDB offers many advantages over relational databases: it offers a clearer structure for each data object, allows for smoother scaling of projects, and offers performance improvements due to its faster data access times. Moreover, since it stores data in a format very similar to JSON, which is the data format used by JavaScript to store objects, it is easily connected to and readable by programs, especially those based on JavaScript. 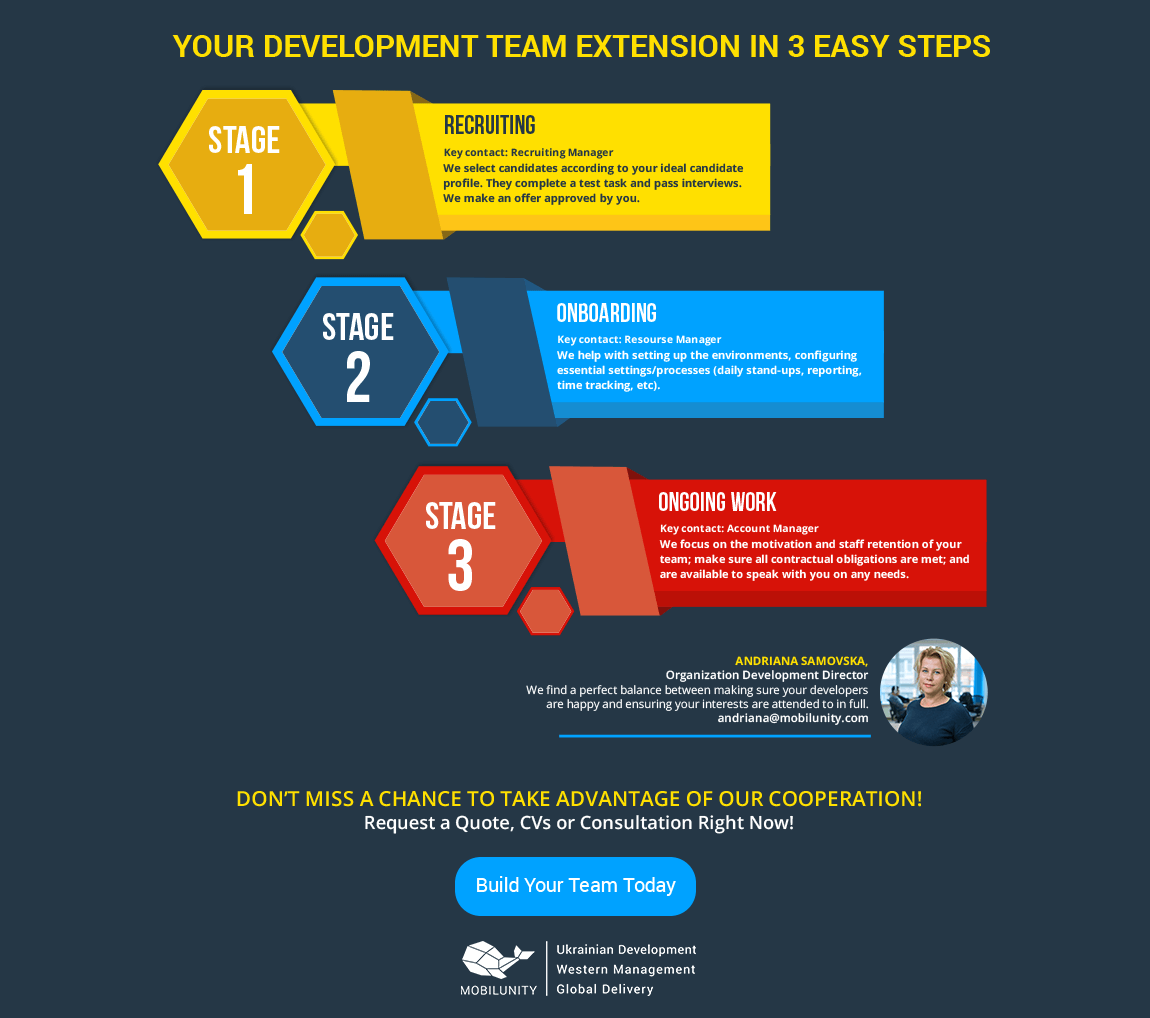 Here are some of the biggest features of AngularJS that make it beneficial to use over pure JavaScript.

Different software architectural patterns are used by developers to facilitate cleaner and clearer codes that are easier to maintain. One of the most popular patterns is the model-view-controller (MVC) pattern. This programming architecture divides an application into three main components: the model, which corresponds to all the data and objects that flow through the application; the view, which represents the user interface with which a web user interacts; and the controller, which acts as the mediator that connects the model and view components.

While the MVC architecture has to be manually implemented when using pure JavaScript, AngularJS provides out-of-the-box support for it, making MVC implementation a breeze.

With pure JavaScript, when a user modifies something on the view, such as form values on the user interface, the data in the model component that corresponds to these values must be manually updated to reflect the changes. Likewise, when any data in the model changes, the view must be manually refreshed to reflect the change. With two-way data binding, however, the need for such manual updates is eradicated: changes in the view are automatically reflected in the model, and vice versa, so the two components are constantly synchronized. This feature is called two-way data binding, and it is perhaps the biggest feature of AngularJS because it greatly simplifies development of highly dynamic applications.

AngularJS uses entities called directives, which are HTML attributes that are used to mark a group or block of HTML codes for them to function in a certain way or to relate them to other blocks. The great thing about AngularJS directives is that they foster code reusability: if, for example, a block of HTML code will be used multiple times throughout the application, instead of copy-pasting the code block in multiple sections, an AngularJS MEAN stack developer can simply assign a directive to that block and reuse it as needed in different sections of the application.

Form validations are part of the first line of defense in web applications, allowing the system to catch errors early on and block them from further propagating errors in the system, as well as to protect the system from malicious user activities. Pure JavaScript requires developers to manually validate forms, but AngularJS offers automatic form validations. Simply by specifying the type of input expected from the user, AngularJS form components automatically validate user input using standard form input rules. This takes a lot of work off the developer’s hands and makes development much, much quicker.

If you’re in the market to hire AngularJS developer, here are some skills or qualifications that you should look for to ensure the competency of your developer.

In today’s world where there are now more mobile devices than standard computers like desktops and laptops, mobile web development is just as important, if not more important, than desktop web development. Web applications should now be able to adapt to different screen sizes and form factors. Mobile Angular UI extends the power of AngularJS to mobile devices, making them optimized to smartphones and tablets and providing deep integration with other mobile UI frameworks such as Bootstrap. With this skill, an AngularJS MEAN developer will be able to develop applications that readily perform on mobile devices just as well as on desktops and laptops.

Being a framework, AngularJS abstracts a lot of the details of its logic circuitry behind short and simple APIs, so that developers can focus on functionality rather than the messy code details. To some, this may seem like a double-edged sword: since much of the codes are separated from the user’s main codes, debugging may prove challenging, especially since the developer is likely not familiar with the actual code details of the framework. One remedy for this is unit testing, which allows the developer to test the smallest testable parts of a software individually. AngularJS provides a great unit testing tool that makes unit testing straightforward and effortless.

Modular programming is the practice of software development where the application is divided into small units called modules, where each of the modules can easily be modified, removed, added, or rearranged without greatly impacting the whole application. This implies that each module contains a group of similar functions, and each module can be used and reused in different parts of the application with minimal side effects. This greatly reinforces code reusability and simplifies collaborations between multiple developers. AngularJS uses modules, so using a modular programming approach maximizes its benefits.

The services of full stack devs are considered to be the top quality of all, as they specialize in all aspects of web development, both frontend and backend including MEAN. Full stack developer salary is higher than salary of other developers and ranges depending on the experience of developers and the country of residence:

*Average salary is calculated on the basis of entry, middle and senior salaries.

As MEAN stack developers gain more experience, improve their skills. The gradation of the salaries depending on the country is available in the following chart:

*Average salary is calculated on the basis of entry, middle and senior salaries.

Average junior MEAN stack developer salary NYC and Miami is approximately $81,400 per year and $70,500 correspondingly. New York is one of the largest cities in US with competitive prices, so New York MEAN developer salary is higher than in other cities.

Below you may check the chart with monthly net salaries of MEAN stack developers in different countries throughout the world: 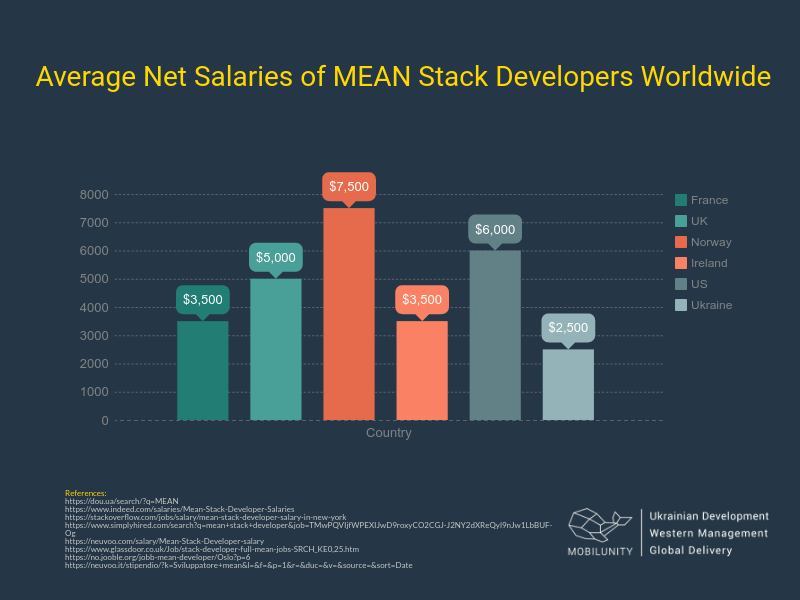 and check our video comparison on full stack salaries worldwide:

Depending on your needs, there are three ways to hire a full stack & MEAN JavaScript developer for your project.

Below you may check and request a MEAN stack developer resume in order to understand whether our experts are suitable for your project. 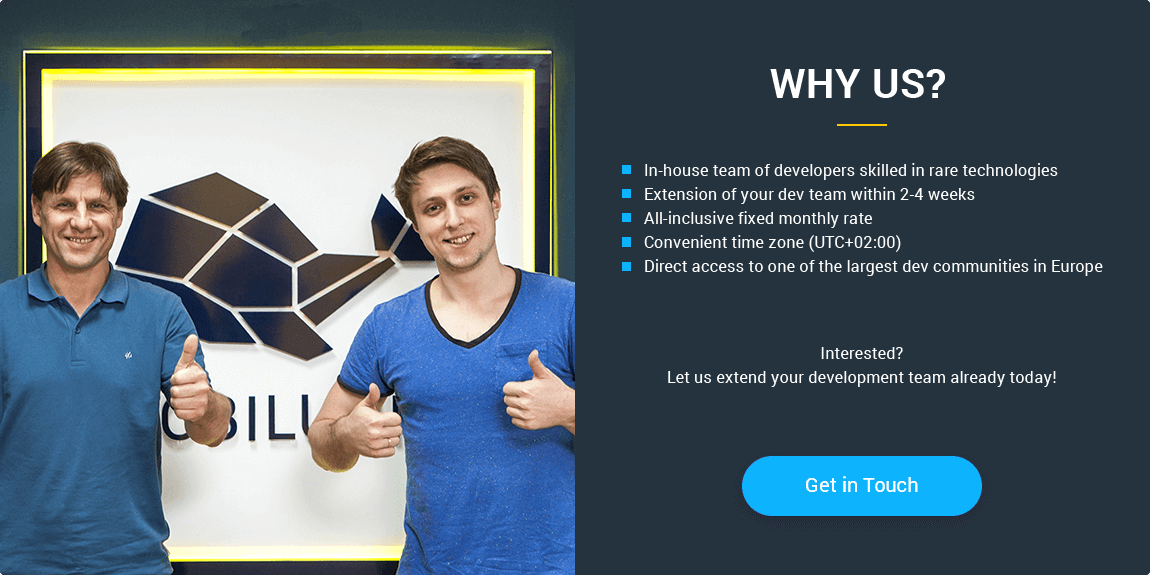 If you wondering how to hire a Bootstrap developer, read our guide on how to do it right.

Contact us now to learn more about our programmers, their all-inclusive rates and hire MEAN stack developers for your project today!

"We were lucky to find Mobilunity who recruited and hosts our nearshoring dev team in Kiev."

Our clients
Request a quote

Mobilunity is very different from outsourcing to Southeast Asia. The quality is high and the price is affordable. Engineers have high skills, as well as high motivation and commitment level. It is a partner worth working with, crossing over the natural language barriers.

Our clients
Our awards 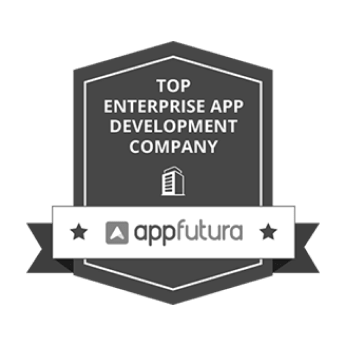 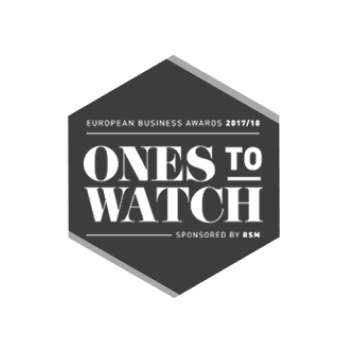 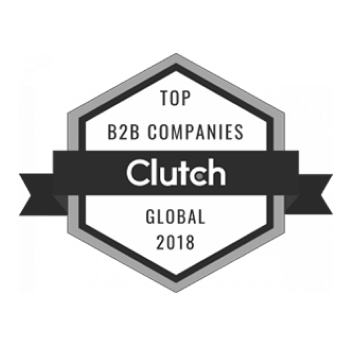 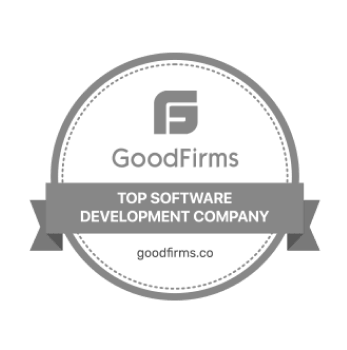 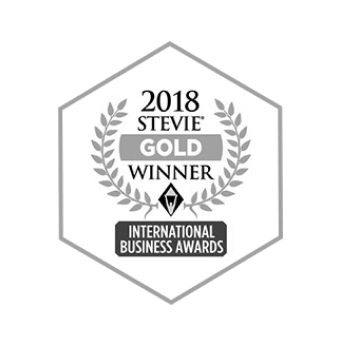 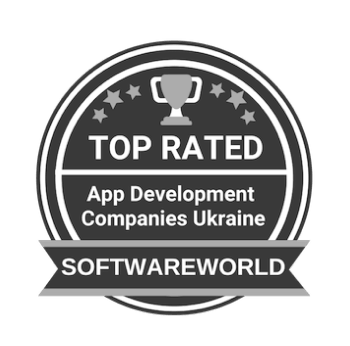