With the introduction of Swift in 2014, Apple introduced a new standard for developing iOS applications. Before Swift, Apple’s products had relied on Objective-C for both desktop applications and mobile apps.

Many Objective-C developers immersed themselves in learning the new language, curious about the experience of being a Swift developer.

Swift is a departure from Objective-C, introducing many features that make it easier to produce safe code. It provides mechanisms that eliminate null pointer errors and allow easy catching of errors.

Syntactically, it ditches the Smalltalk-like syntax of Objective-C in favor of a more common dot notation for method calls. In other areas, however, the language retains Objective-C characteristics.

Similarities of Swift to Apple Objective-C

For example, Swift uses protocols that are similar to those in Objective-C. The language is able to share libraries with Objective-C as well as the C programming language. This makes it easier to reuse existing libraries for Mac or iOS development. 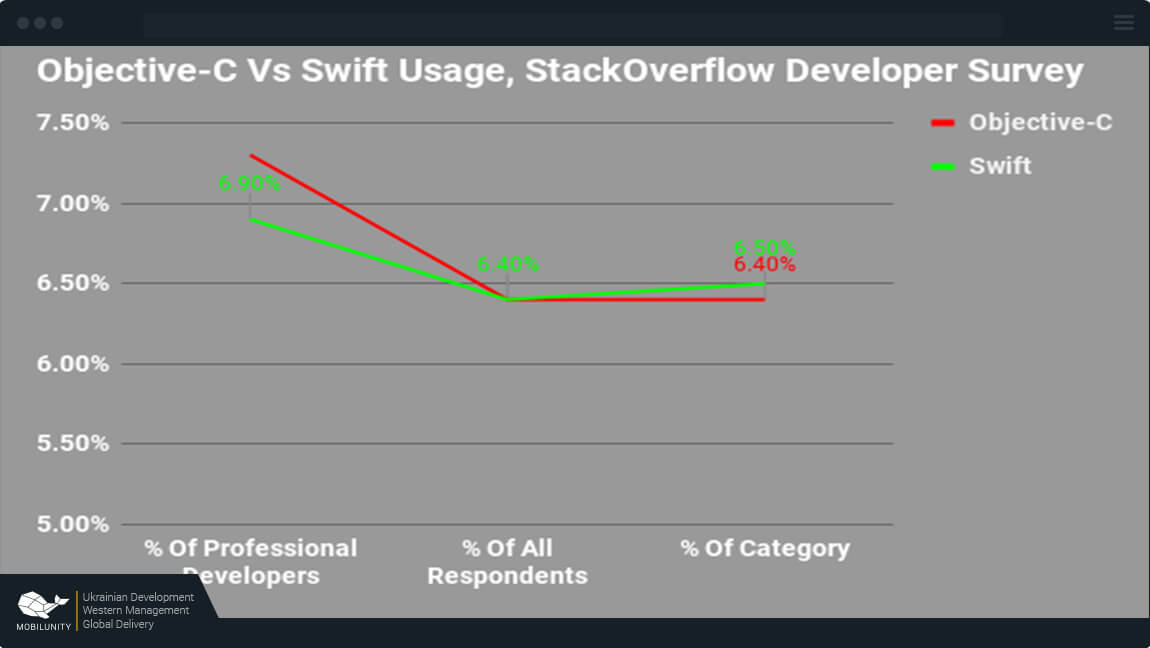 Objective-C and Swift Usage According to StackOverflow Developer Survey 2017

As seen in the chart above, based on StackOverflow Developer Survey data, Objective-C is just slightly ahead of Swift in adoption by professional developers.

What is important to note, however, is that Swift has caught up with Objective-C, a much older language, in a short 4 years since its release. Its momentum could make Objective-C a niche programming language with fewer programmers and users.

Like Objective-C, Swift can be used for developing apps to run on Apple platforms that include: 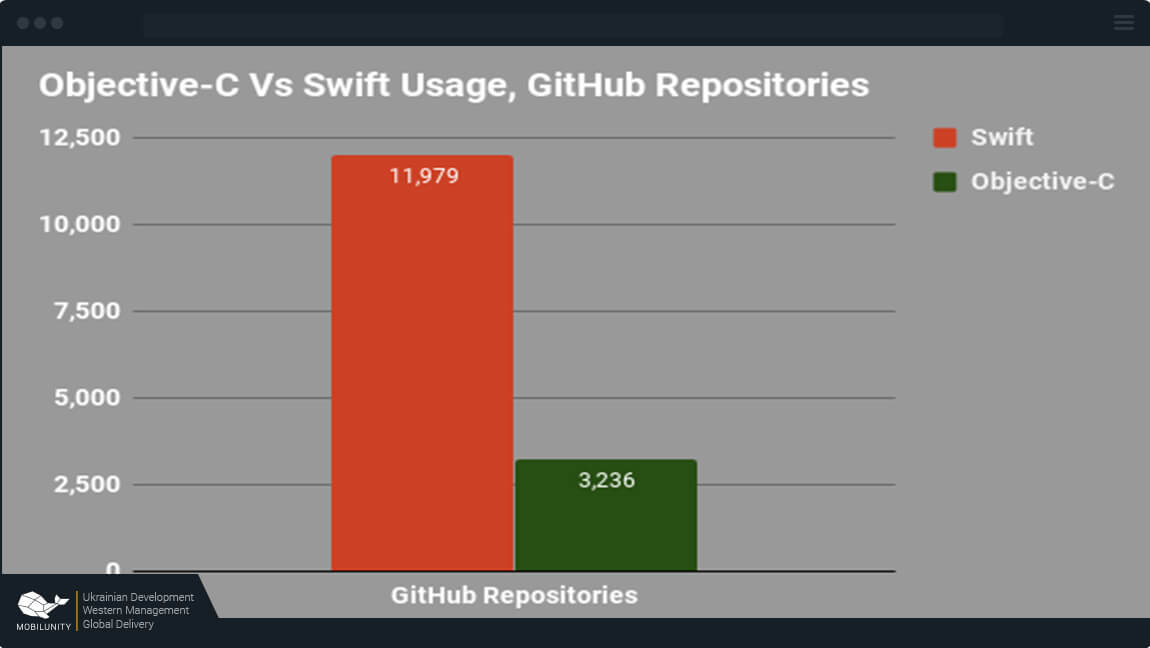 On the programming site GitHub, however, Swift has now overtaken Objective-C in popularity. There were over 11,000 Swift repositories on GitHub compared to Objective-C’s 3,236 repositories.

In addition, InfoQ reported that Swift had overtaken Objective-C in the TIOBE Index back in 2016.

Despite the growing popularity of Swift, Objective-C has refused to go away. In fact, many new apps are still being developed in Objective-C. A good number of Mac and iOS developers plan to never switch to the new language.

Objective-C is much older than Swift. It was launched to the public world in 1988 and was subsequently used in many of Apple’s software products.

Objective-C, despite its quirks, is popular with iOS programmers because it has strong semantics and code organization capabilities. This makes writing idiomatic Objective-C a straightforward process, resulting in apps that have high code quality.

Developers who write low level code like the easy interoperability between Objective-C and “native code.” Native code refers to code written in C and C++. This code has semantics much closer to Objective-C in terms of memory management and low-level capabilities.

Pros and Cons of Objective-C

When looking at the pros of using Objective-C instead of Swift, the major advantage is the stability of libraries already in the ecosystem.

Since Objective-C has been around for longer, more libraries are available, which makes creating an app easier to do. This, however is subjective, as Swift aims to make app creation generally easier. After all, Apple did not decide to introduce Swift willy nilly as the future of Mac and iOS development.

When hiring an Objective-C developer, you might be concerned about any or all of the following frequently asked questions.

Q. Which One Is Cheaper to Hire for, Objective-C or Swift?

While there are developers highly skilled in Objective-C, they tend to cost more than Swift developers due to the relative challenge of coding Objective-C. For example, PayScale lists Objective-C developer salary at $81,795, compared to $80,395 for Swift.

Q. Which One Is Faster to Develop With?

This depends on the application. A straight-forward app that needs no external libraries can be coded more quickly with Swift. On the other hand, if you have to integrate a complex app with external libraries, you might be able to do it faster using Objective-C.

Q. Which One Are Most Developers Using?

Many older iOS developers have stuck with Objective-C. However, many of the new entrants into Mac and iOS prefer Swift.

Yes, a new Objective-C developer can develop good apps, however, proper training is the key to getting new developers proficient in the language.

Hiring Questions for The Developer

When it comes time to hire the developer, there are some questions you should ask to ascertain the qualifications of your Objective-C developer. Here are some of them: 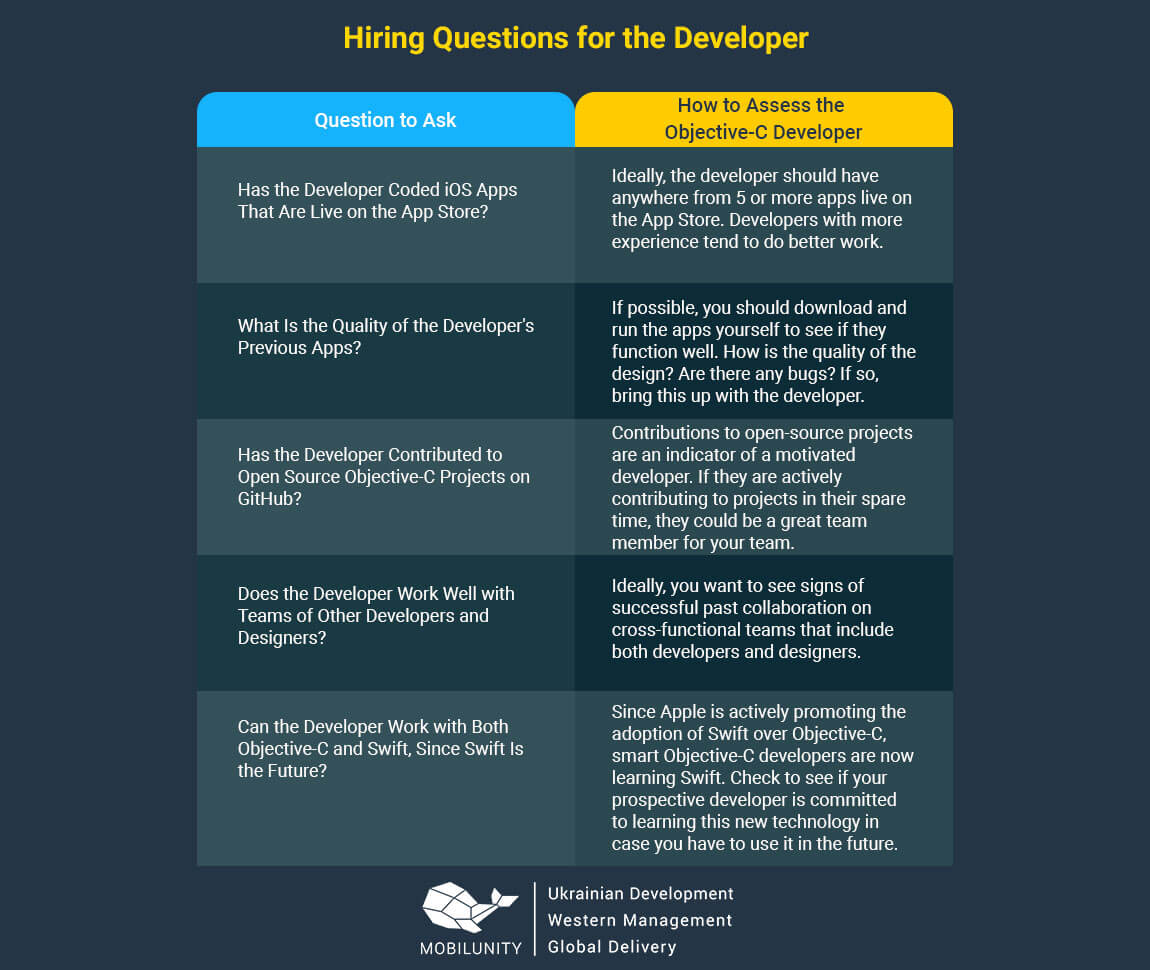 Save Money While Hiring Objective-C Developers

To save time and money when recruiting Objective-C developers, you will need a smart strategy for recruiting. One great approach that has worked for many businesses is to recruit a remote team from Eastern Europe or other regions of the world.

Objective-C developers in tech-focused cities like Kiev and Prague are reputed for their excellent mastery of iOS development. What is more,they have outstanding knowledge of algorithms and Apple’s software libraries for making apps.

Ukraine has some of the best companies in this field, such as Mobilunity, which can save you money and time on Objective-C development. Mobilunity has experts in both Objective-C and Swift, who can help you determine the best choice for your iOS software development project.

Get help for your development with our Objective-C developers!

How to Interview a Blockchain Developer | Tips for Recruiters

How to Choose Your WordPress Consultants?