Home /  Blog / We Do /  How to Differ Virtual Reality and Augmented Reality Developer?

How to Differ Virtual Reality and Augmented Reality Developer?

Lately, technologies started developing so rapidly that at some point it became quite difficult to keep track of all of them. However, there are some, that gained huge popularity due to their revolutionary approach. We are talking about VR and AR technologies. What is augmented and virtual reality and how you can implement them into your business strategy – you can learn from this article.

What Is Augmented Reality and Virtual Reality? A Quick Overview

So what is virtual and augmented reality after all? Both these technologies were designed to alter our reality’s perception to some extent. In this case, it would be fair to start with AR as it gives the lesser amount of this alteration if to compare with VR.

AR or Augmented Reality is a technology that allows you to create some sort of a mixture between existing reality and the virtual one. It is when unreal, virtual objects in the user’s perception become part of the reality surrounding picture of the world. Usually, it is executed in the form of various sensor features i.e. color lines, text messages and so on.

Currently, any AR developer is a very demanding specialist, as this technology is getting to be more and more popular in various industries, from the gaming one to even the military. There are more and more virtual reality and augmented reality companies that are looking for such specialists.

On the contrary to AR, VR technology creates an ultimate virtual experience.

For the creation of advanced virtual reality scenarios, many other sensations, such as sounds, vibrations, the wind blows, shocks, waterfalls, physical motion, and others are also integrated with the environment to make more sensational and real lifelike scenarios.

Now that you know what is augmented reality and virtual reality, let’s move to the main differences between these two.

The main difference between augmented reality and virtual reality is described in the following table: 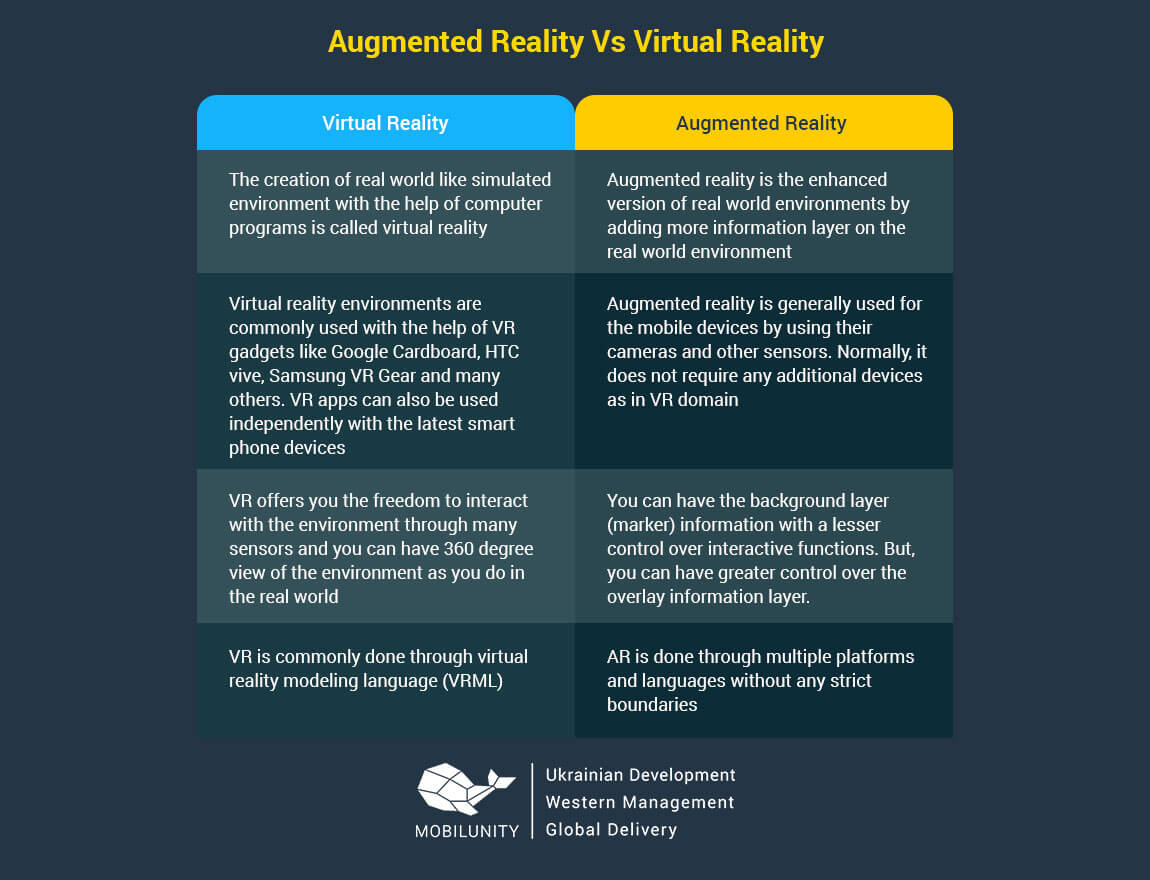 Hopefully after this quick comparison it will be easier for you to understand the difference between virtual reality and augmented reality.

The growth of both the virtual reality and augmented reality is consistently increasing in almost all domains of industries, especially in the gaming, education, aviation, industrial apps, commercial apps, medical and consumer electronics. The total market size of virtual reality hardware and the software will cross $40.1 billion by 2020, as per predictions of Statista website.

Moreover, according to the Orbis Research Report published on Reuter website, the global market revenue of virtual reality (VR) domain will consistently grow with a whopping 54.84% from 2019 through 2023. This report also forecasts a huge growth of over 50% of new investments in the domain of VR and AR companies will be focused on the virtual reality applications specifically targeted to the solutions of industrial problems. This is a clear indication of a huge growth in the virtual reality development of software applications in the coming years.

The IDC forecast predicts the virtual reality and augmented reality as the brightest growth spot in the futuristic technologies with gigantic global spending (estimated) of about $143.3 billion by 2020 with a massive growth of 198.0% CAGR during the 2015 to 2020 period. Thus, the future of virtual reality technology is so shiny in many years to come. 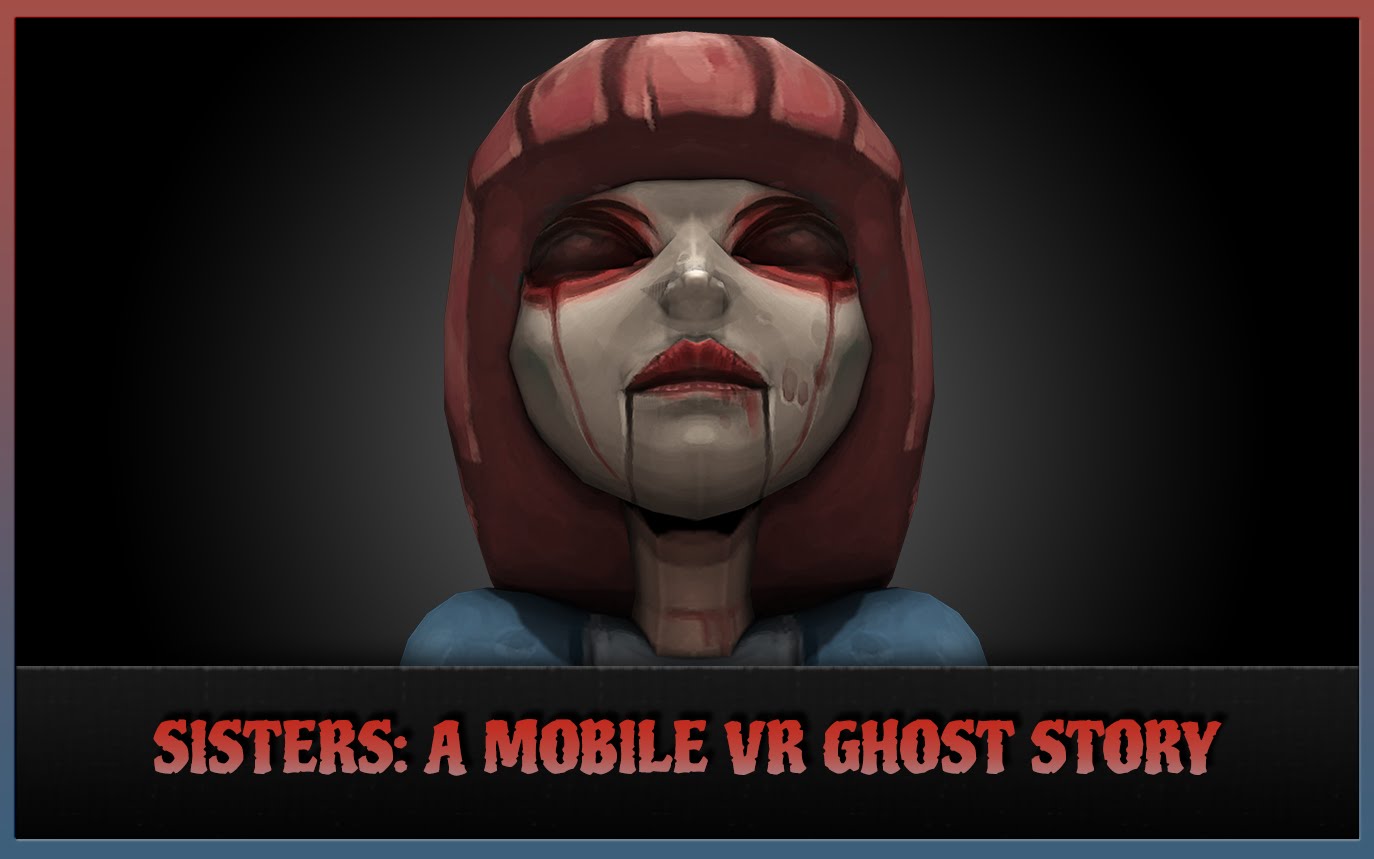 This is one of the interesting virtual reality application designed for ghost stories on mobile devices. The major features of this VR app are listed below: 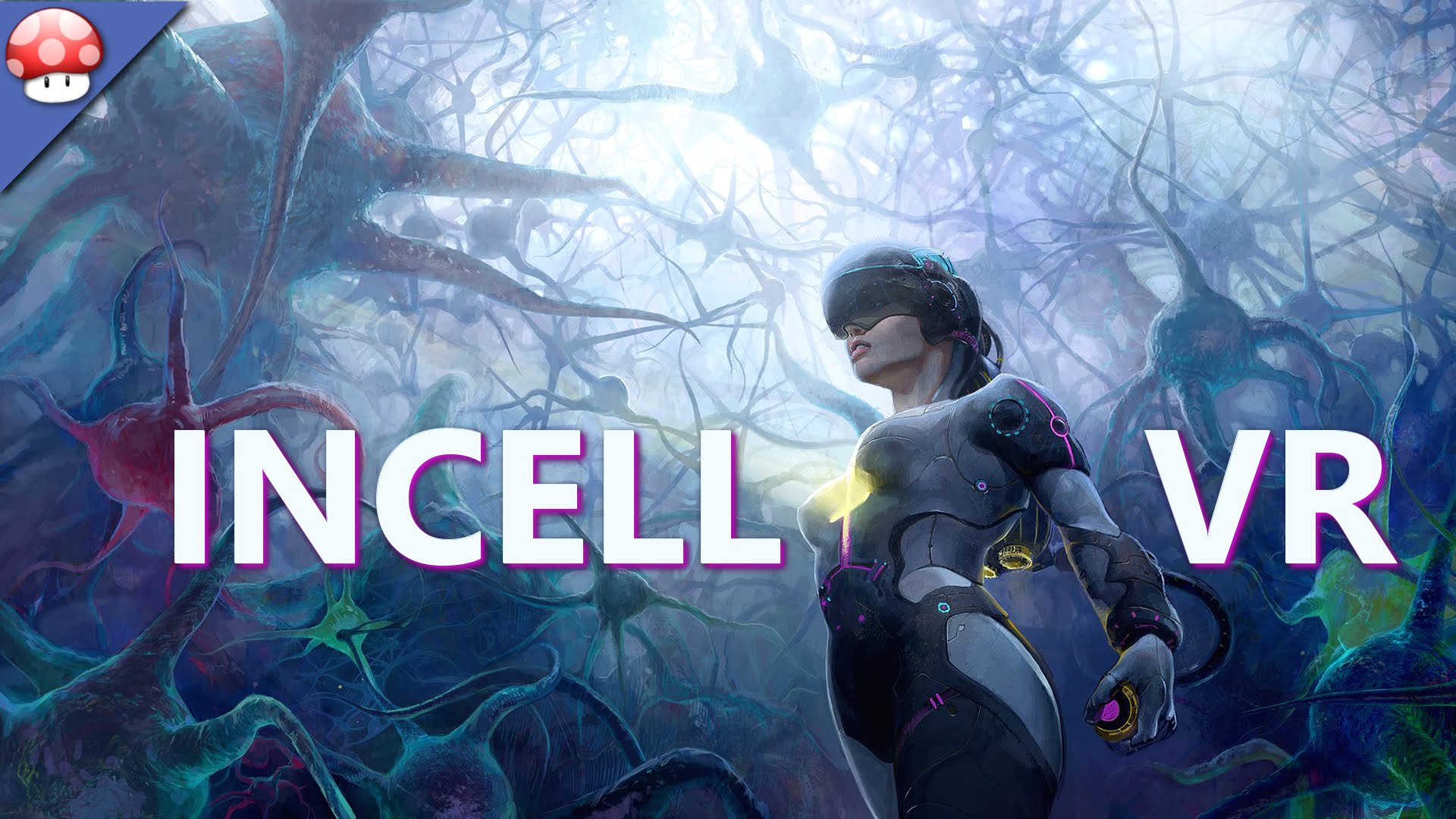 InCell virtual reality is a VR game designed for mobiles to play with Google Cardboard. It is an action and racing game with great virtual environments. The main features of this app include:

This is a virtual experience of journalism in the real world stories told by the New York Times agency journalists. This app is designed to introduce you to real-world journalism in a 3D environment. The main features of this app include: 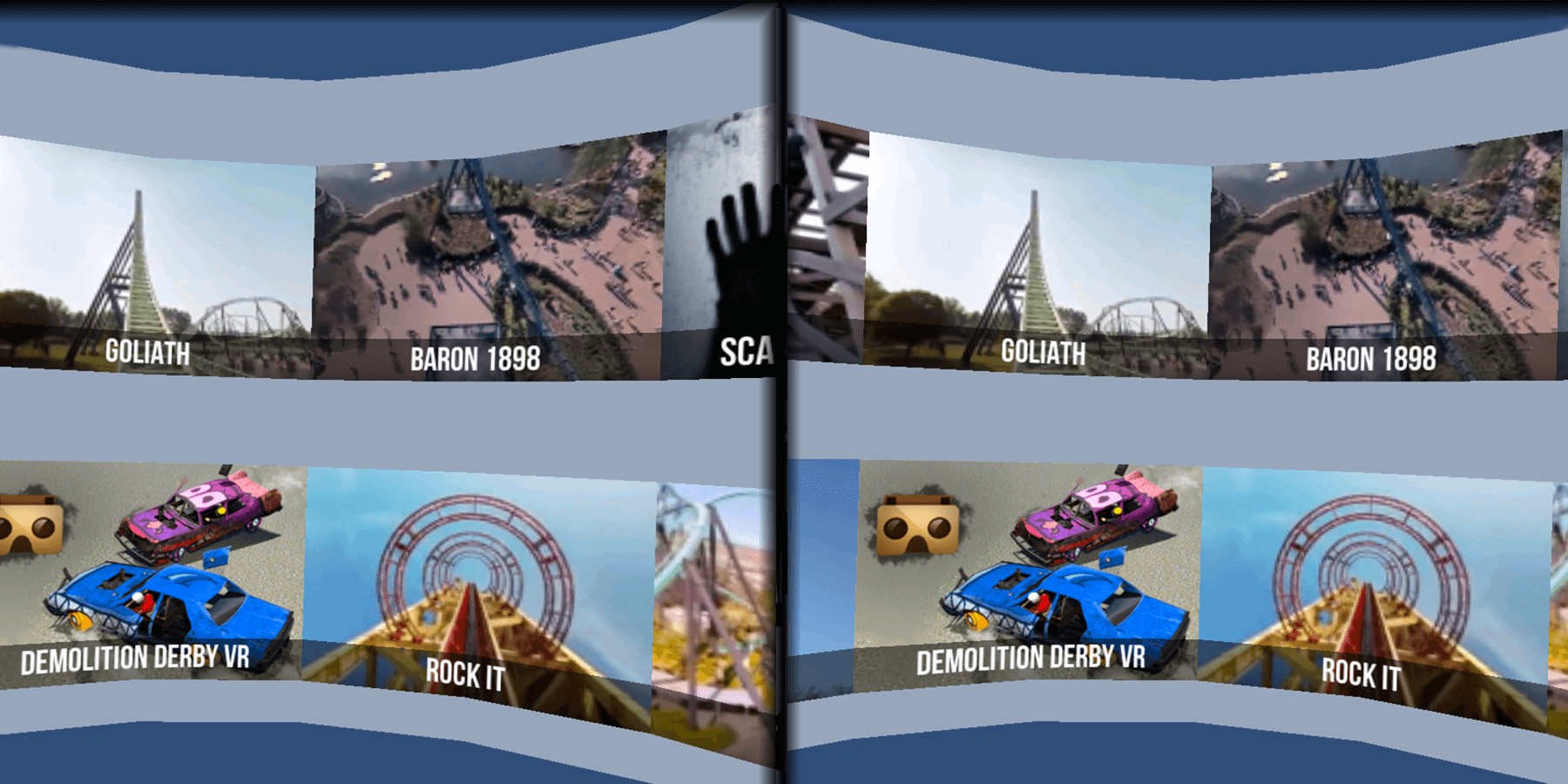 This is a powerful set of multiple roller coaster rides bundled into one virtual reality application. It offers a great experience of enjoying your dream ride of a roller coaster virtually through Google cardboard and your mobile device. The main features of this app include: 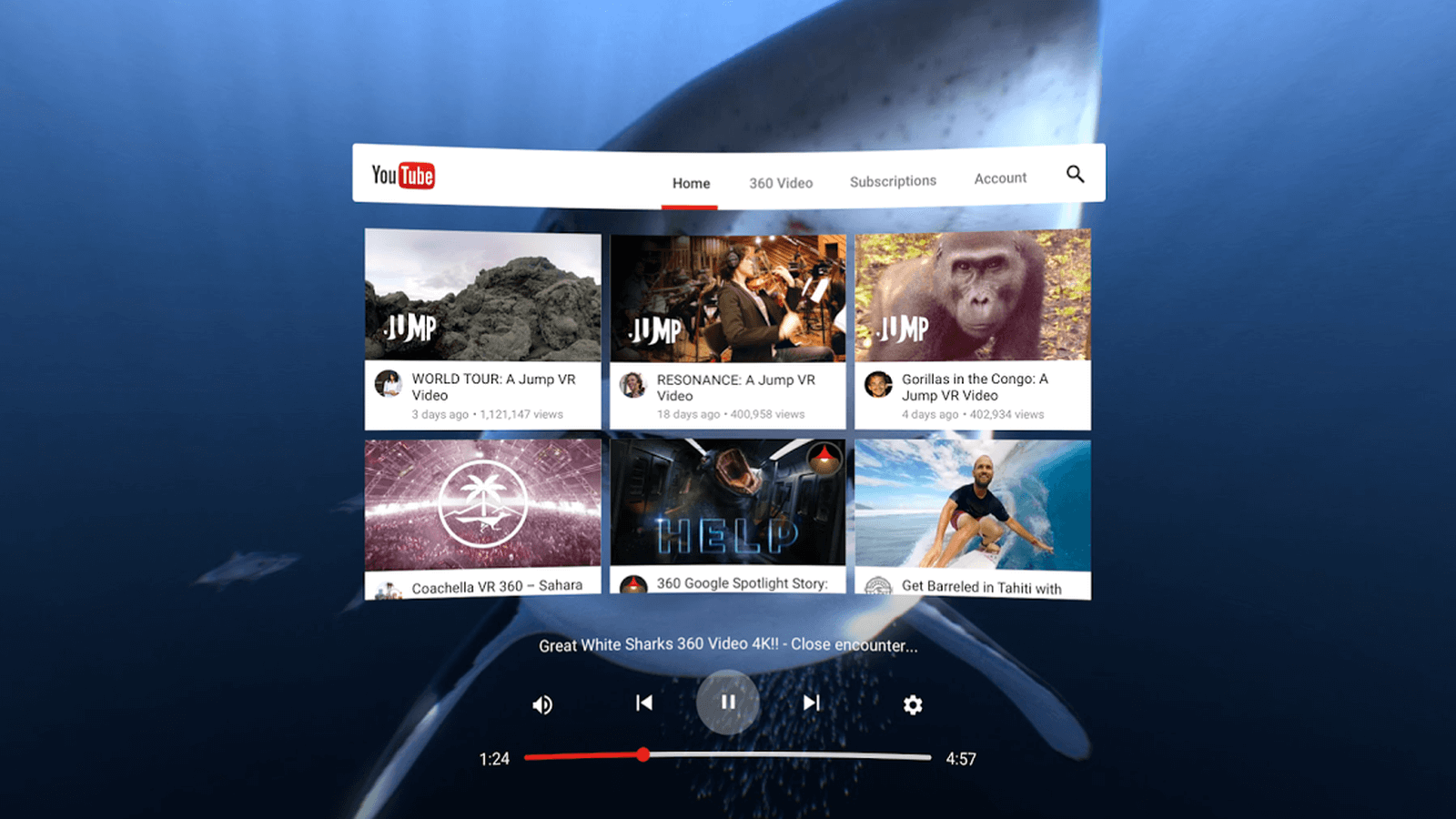 This is a powerful video app that turns every YouTube video into a virtual reality environment for you to watch in three dimensions. The main features of this application are given below:

We already spoke about products of various VR and AR companies and it is time to take a closer look at some most popular AR applications.

Probably the most popular game of 2016 gives you the perfect example of how addicting and fun AR games can be. Also, it gives you a clear understanding of what is the difference between augmented and virtual reality.

Google Maps is an application that has been out for a while and is one of the most recognizable products of VR/AR development. Not long ago Google decided to compete with virtual and augmented reality companies in this sector and also included some AR features into this application.

Everyone knows this application because of its fun approach to editing photos by adding various filters. This app clearly shows the difference virtual reality and augmented reality have.

Hopefully, after taking a look at these AR and VR companies products, it is easier for you to understand what is augmented reality and virtual reality.

The difference between an AR developer and a VR developer in terms of their skill sets and responsibilities is given in the table below. 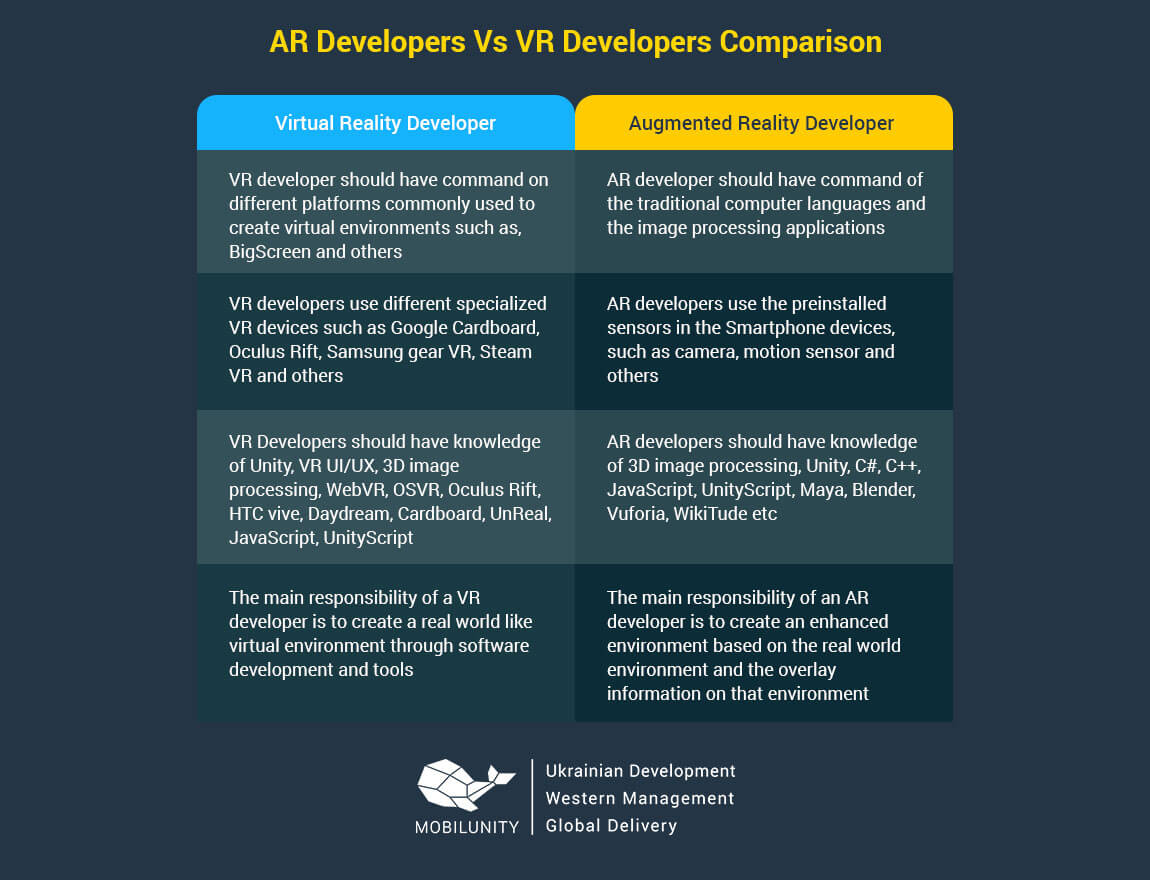 Having learned all that, you now probably can easily tell whats the difference between AR and VR.

According to the World Economic Forum website information, the global shipment of VR devices is expected to touch $35 million by 2020 from just less than $1 million in 2015. The software development spending is doubling in the VR field. This increases the demand for VR developers all over the globe.

As far as the virtual reality application development cost is concerned, it is very high in the North American and Western Europe due to the high living standard/cost. The other regions where you can get highly skilled and qualified virtual reality developers at a very competitive price are Eastern Europe and Asia. That is why lately outstaffing became a true ‘hit’ among companies lately, making this practice a great tool for reducing costs and finding outstanding specialists.

Laravel Development For Any Business

How to Find a Software Engineer in Belgium?