How to Hire a Blockchain Developer for Remote Work

The Internet has connected the entire world into one big cyberspace where people can instantly communicate and exchange data with each other regardless of physical location. Just a few decades ago, people had to use courier services, which typically took a couple of days or weeks and cost a significant amount of money, just to exchange letters and messages. The emergence of emails has made it possible to exchange messages within seconds, and has brought down the cost of exchanging messages to practically zero.

Similarly, the rise of digital currencies has achieved the same feat with monetary exchanges and transactions. It has allowed the exchange of money between people without requiring the physical transfer of cash, expanding the possibilities of the internet to online payments and transactions between people even when they’re thousands of miles apart. Many digital currencies, however, come with their own security concerns and may be susceptible to fraud and hacking. With the raise of digital currencies rises the demand on cryptocurrency developers.

More recently, cryptocurrencies emerged as a solution to the many security risks involved in most digital currency transactions. Whereas typically, digital currencies required some central authority to regulate transactions and detect fraud, cryptocurrencies work without the need for one. Instead, cryptocurrencies normally use a blockchain, a public record of transactions that are maintained by an entire network of computers, to validate transactions and provide reliability. A blockchain is secure by design, because transaction records cannot be altered once they’ve been recorded in the blockchain without disrupting the entire network.The most popular cryptocurrency by far is the bitcoin, which holds over 61% of the total market capitalization of cryptocurrencies. Users typically use third-party services to store and manage their bitcoin credits, and these services are commonly called bitcoin wallets. One of the most popular providers for such bitcoin management services is Blockchain, aptly named after the technology behind bitcoin. In this article, we take a closer look at bitcoins and Blockchain, and how Blockchain and bitcoin development can help businesses.

Created on August 2011, Blockchain is a company that provides three core services.

Their first service, available from Blockchain.info, is a blockchain explorer that allows users to explore bitcoin transactions and quickly check the status of any bitcoin transaction. Just over two years into the creation of Blockchain.info, it became the most popular bitcoin website in the world with 118 million monthly page views and 3 million monthly unique visitors. Moreover, it has become a standard reference for bitcoin statistics, and it is being used by popular financial companies like Reuters and Bloomberg for their reports.

Another core service provided by Blockchain is their bitcoin wallet. This service enables users a simple and secure platform through which they can manage their bitcoins, as well as send and receive bitcoin payments to and from other users. In addition to bitcoins, the Blockchain also supports ether, which is the currency used for the Ethereum platform, another emerging cryptocurrency that is gaining momentum and is the second most popular cryptocurrency after the bitcoin. Blockchain currently hosts over 18 million cryptocurrency wallets and has processed over 100 million transactions between users from over 140 countries around the world.

The third core service provided by Blockchain is their developer platform, where they provide what they claim to be the world’s most used cryptocurrency APIs. With these APIs, developers can easily integrate Blockchain’s services into their applications. Developers can also use these APIs to enable their users to pay with bitcoins or ether from their Blockchain wallets, check transaction statuses, and even check bitcoin and ether exchange rates and statistics within their application without having to leave and open a separate browser. The Blockchain API currently supports Python, Java, C#, Ruby, PHP, and Node as programming languages for Blockchain programming and bitcoin programming. If you’re looking to add support for bitcoin to PHP applications or if you’re looking to create a Blockchain Java app, hiring Blockchain developers can help you use these APIs. 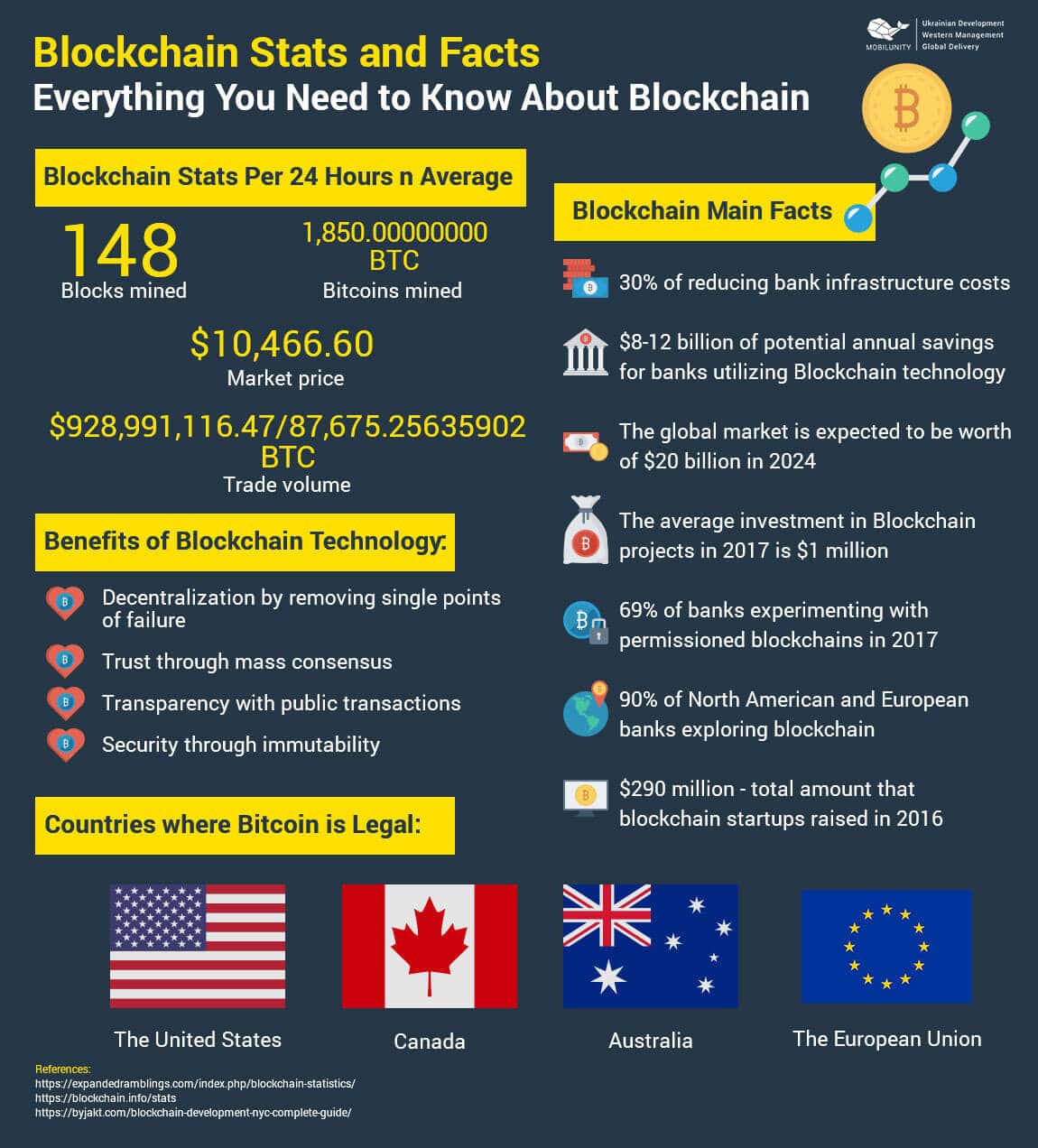 When looking for a good Blockchain software engineer to integrate Blockchain functionalities into your application, here are some blockchain developer skills and qualifications you should look for.

A Blockchain software developer won’t be very reliable if he doesn’t understand how bitcoins and ethers work. A good developer has to have mastered the basics and fundamentals of cryptocurrencies in able to be efficient at Blockchain programming and properly using Blockchain’s various APIs. This includes some understanding of how a blockchain serves as the backbone that powers bitcoins.

Proficiency in One of the Supported Languages

Actual Experience with Bitcoin and Ether

Here are some sample blockchain developer resume from actual blockchain engineers to give you a better picture of their usual background and skills.

Designed with the Certification Advisory Board, the Blockchain Training Alliance offers a number of different certifications for blockchain development, as well as online courses and training to help prepare for these certifications. Among the certifications offered are the following:

Now that you know what to look for in a good Blockchain and bitcoin developer, your next concern would be the cost: how much is the typical blockchain engineer salary? In order to find out, let’s take a look into blockchain developers salary and compare the average blockchain developer salary in different countries. For this blockchain salary comparison, we use PayScale, which gives us the average self-reported salaries in various industries.

Since there is no available data for Blockchain programmer salary in particular, we compare the salaries of software engineers in general. Though it won’t be giving us accurate values for the actual costs, it will nonetheless give us a sufficiently accurate comparison of the relative salaries of such developers in different countries. This will then allow us to infer the relative Blockchain architect salary or Blockchain consultant salary in different countries. According to PayScale, the average gross annual salaries for software engineers in various countries are as follows:

There are several ways to hire Blockchain developer. Let’s take a look at three of the most popular hiring options and see which one is best for you.

You can always take the traditional route to find blockchain developers and hire a bitcoin developer from your local market. One way to do this is by posting jobs at one of the many job search websites like LinkedIn, Glassdoor, and Indeed. This method is the most direct, but it can also be the most expensive, as the cost of hiring developers in many countries can be very high. In addition, this method will require you to provide physical resources like office workstations and computers for your hired developer, pay for his own software licenses, and pay for government-mandated fees like taxes and insurance. Moreover, this usually involves long-term contracts, so you will have to keep your developer even after your project finishes.

Also, there is another option you might want to consider for your business – hiring a blockchain consultant. Blockchain consulting is a bit different from a stereotyped advisory, you will receive a personalized approach to how manage your company’s activity in the most effective way.

You can also hire a freelance Blockchain team. One way to do this is by browsing through freelance portals like Upwork, Freelancer, or Toptal. This method can be quite cheap due to the intense competition in the freelancer community, but it can also be very risky, because your freelancer has little accountability for your project and can simply opt out of your project at any time, without any obligation to notify you properly. The quality of work that you get can also be at stake since the skill levels of freelancers can be highly uncertain.

One other option you can take is to hire a dedicated team of Blockchain developers from a third party company that provides dedicated developers. With this method, your developers work for you full-time but stay within their company’s premises to use their office resources. This method therefore also tends to be quite cheap, as you won’t be having to allocate physical and digital resources. Moreover, you also won’t be having to pay taxes and insurance, as the developers provider will shoulder those expenses. What’s more, you are able to take full advantage of the low developer cost in some countries to further shrink your expenses. In addition, you get full reliability and accountability from your developers. To give you even more room for savings, this method also allows you to easily add or remove developers as your requirements change, thereby giving you full control and scalability for your project.

Clearly, hiring a dedicated Blockchain team is your best choice, as it achieves the perfect balance of affordability and quality.

As the popularity of cryptocurrencies as a means of payment continues to rise, the incentive for businesses to support these currencies becomes more and more pronounced. Blockchain is among the most popular platforms to provide support for these currencies. We’ve taken a look at blockchain and how it works, some skills needed to become a good blockchain engineer, some blockchain resume samples, the ways in which one can hire a blockchain consultant, as well as how much it will usually cost to hire a blockchain expert in different countries.

Having learned of all these various things about blockchain, it’s now the perfect time to integrate Blockchain’s services into your own applications by hiring a competent Blockchain developer. If you happen to be looking for one, you’ve come to the perfect place! Here at Mobilunity, we have Europe’s best developers skilled in Blockchain technologies and many other tools. Located in Ukraine, we also offer among the lowest rates you can find on the continent. When you hire a blockchain developer from us, you’re guaranteed to get your money’s full worth.

Work with us now and let’s modernize your application with Blockchain technologies!

What Benefits Can You Get from Hiring a Clarion Developer

Things You Should Know About Website Development Cost Estimation

What Is the Current Ionic Developer Salary Worldwide