What’s the difference between a JavaScript developer and a jQuery programmer? Where to find jQuery developer for hire vs JS?  This is the question that is most frequently asked when it comes to the “holy wars” about JS and jQuery. In fact, there are no mysteries involved. As JS appeared in 1995 as a super innovative programming language at that time, it turned out to be a much better technology than all the existing ones. After jQuery appeared in 2006 it turned out to be simpler and faster, so it is often considered to be main competitor of JavaScript.

Before jQuery emerged, programmers used to create their own small frameworks for JavaScript that enabled them to handle the bugs and have more time for work on various program features. In the course of creation of JS sets of code, jQuery emerged as a library of JavaScript code. It turned out to be faster than regular JS and enforced animating, Ajax interactions, HTML document traversing, etc to become faster and simpler. So jQuery framework has become the most popular among other JavaScript libraries.

jQuery is considered to be 100 times more powerful than JavaScript, as its codes work correctly all the time on various browsers and their versions. jQuery web application can be written with 70-80% less code than if it would be written in JavaScript. For comparison, a complex set of code would require 50-100 lines in JavaScript, while in jQuery, it’ll be written in only 5-10 lines.

Regarding popularity and usage, jQuery has experienced a descent recently. In the job listings, it was completely taken over by React, so React became the first library to pass jQuery in a decade. While in 2016, jQuery had nearly 14,000 job listings popularity, in 2017 it remained on nearly the same position of 12,000, but the popularity of other libraries grew much faster.

jQuery is usually compared with JavaScript, so here’s a quick glance at the key differences between the two: 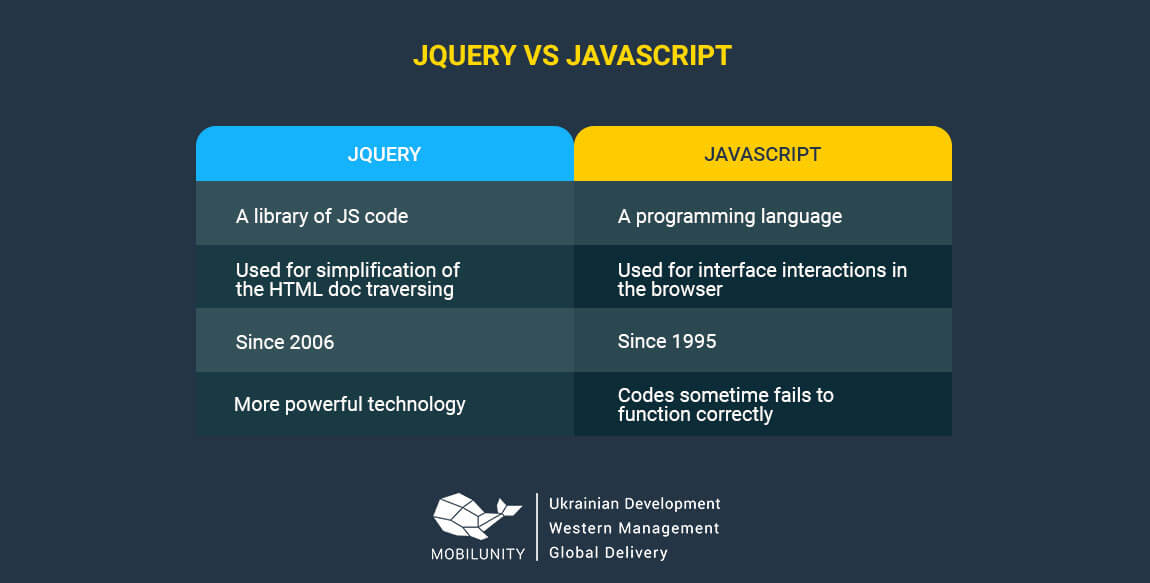 jQuery Developers: Who Are They

jQuery programmer is responsible for development of software and apps and the programming. jQuery developer main responsibilities will include new user-face features development, building the libraries and new code that would be reusable, ensure UI and UX designs, work on components optimization for them to be maximum scalable and fast. He is expected to be familiar with cross-browser compatible CSS, HTML, XHTML, and JavaScript.

jQuery developer resume would mainly include the following features:

Of course, it also depends on the specifics of your vacancy, for example, if you’re looking for Google developer jQuery, the candidate should be able to demonstrate proper knowledge with regard to Google specifics etc.

JS developer is often expected to have experience in UI/UX design implementation via CSS and HTML.

JavaScript developers is expected to have more vast knowledge in coding. Their familiarity and experience in frameworks and libraries should not be limited by jQuery only.

jQuery Developer Salary Around the World

Sure, there are great experts in any country of the world, but what you would be especially interested in is the cost of such people to join your project. We’d point out here that everything depends on your ability to hire remote workers. It’s a well-known fact that as the company decides to work on the remote basis, it is granted a much vaster access to the talent pool, which then is not limited to one country only.

In the table below you’ll find the jQuery developer salary depending on the country:

Privileges You Will Get Hiring Developers with Mobilunity

When it comes to the question where to hire efficient developers with jQuery skills to join your existing team or form a new one, there a few key questions to be answered. Which country you’d like to hire devs from, what’s your paying capacity, how many experts you need, one or more, or a whole team. Mobilunity will meet your requirements regarding the staff and their experience and skills, no matter what they are. Being the company with over 8 years of international experience, Mobilunity can boast sufficient results the company achieve during this time, numerous successful projects conducted with companies worldwide. What is more, the teams of dedicated developers at Mobilunity are senior and middle developers with excellent set of soft skills and hard skills to meet requirements for jQuery projects of any level of complexity.

How Much Does It Cost to Hire a CSS Developer in Ukraine?

How to Choose CMS Development Platforms: A Comprehensive Guide