It’s no secret that small businesses and startups still heavily rely on PHP. Famous for its functionality, extensive market share and user base, and excellent performance, the language still stands strong as the first choice for e-commerce websites, wiki sites, and social media portals.

Speaking of PHP development, we’ll eventually get across using frameworks. As it’s not the cheapest and most convenient solution to develop custom solutions, sometimes it’s better to use a fruit of someone else’s experience. Laravel is among the most famous PHP frameworks. And Laravel developers for hire are in the high demand today.

A strong demand for PHP Laravel projects has birthed the need for talent which, at its turn, has resulted in good developer salaries.

Laravel Developer Salary: What the US Has to Say

The US is a golden land for programmers – most of the top hires and talent write their codes in the States. Trying to understand what is the cap for a good developer, one has to take a look at American numbers.

According to ZipRecruiter, the average Laravel programmer salary is $83,000 per year. The developers with the highest rates are located in New York, with Massachusetts and Maryland being respectively second and third states by Laravel developer rates.

The European economy is diverse since some countries are economically stronger than others. Calculating one estimate number doesn’t give a clear landscape of the market for Laravel developer – here are the stats for key European countries collected by Pearson Frank.

According to a report created by DOU, PHP is the fourth popular programming language in Ukraine. However, due to high competition, the salary of PHP developers isn’t as high as that of Python and Ruby SEs. 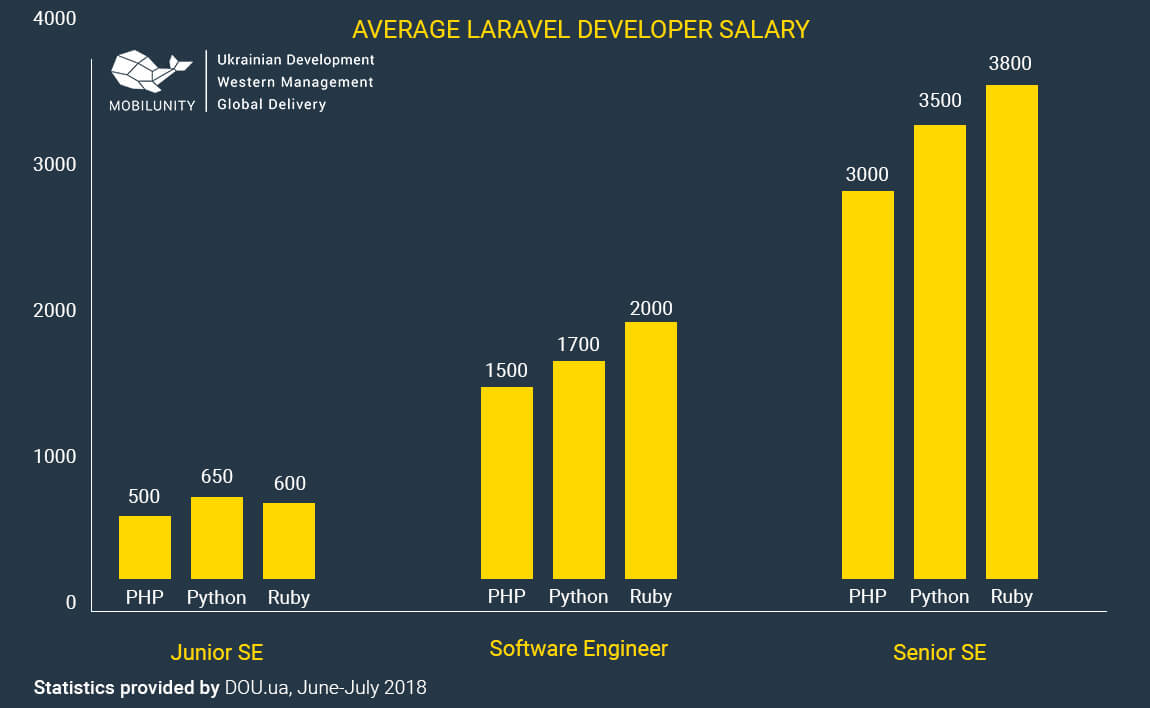 For the last 7 years, the salary of a junior PHP developer had known no major growth nor downfall, being steadily at $500. A similar dynamics can be traced speaking of middle PHP developers. Seniors, however, started evaluation their work higher than they used to – with an average Laravel jobs salary being around $3,000 per month. 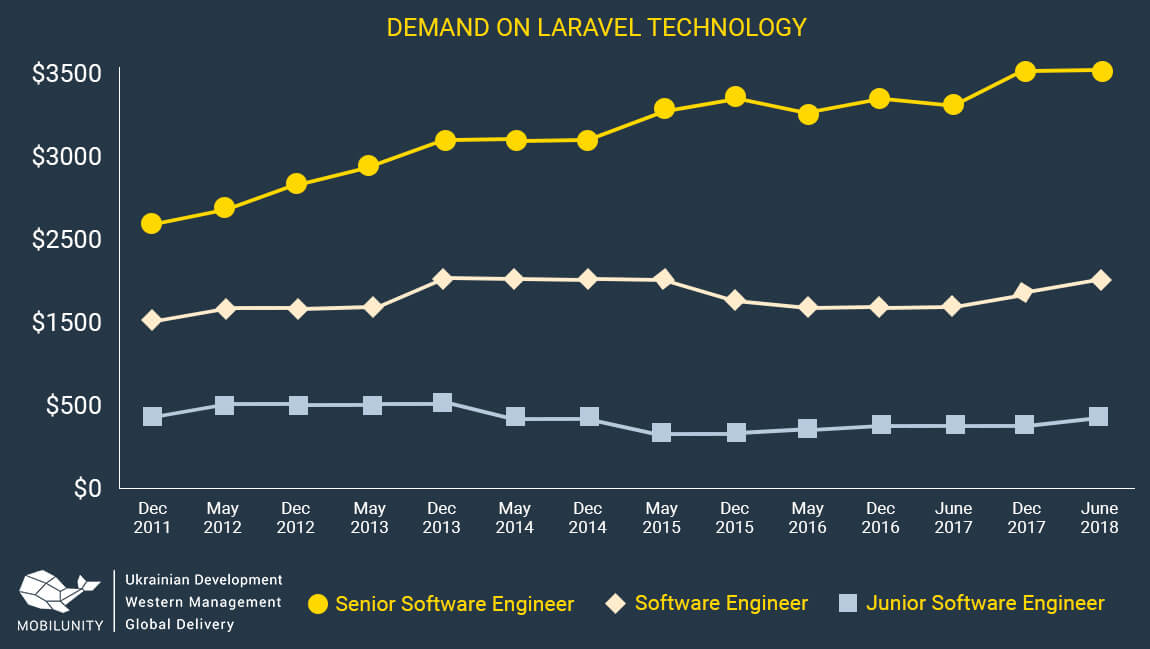 Unfortunately, there isn’t a report in Ukraine that would give a broader landscape of a Laravel framework job salary. That’s why we conducted such a research based on the data aggregated by Indeed.com and PayScale. 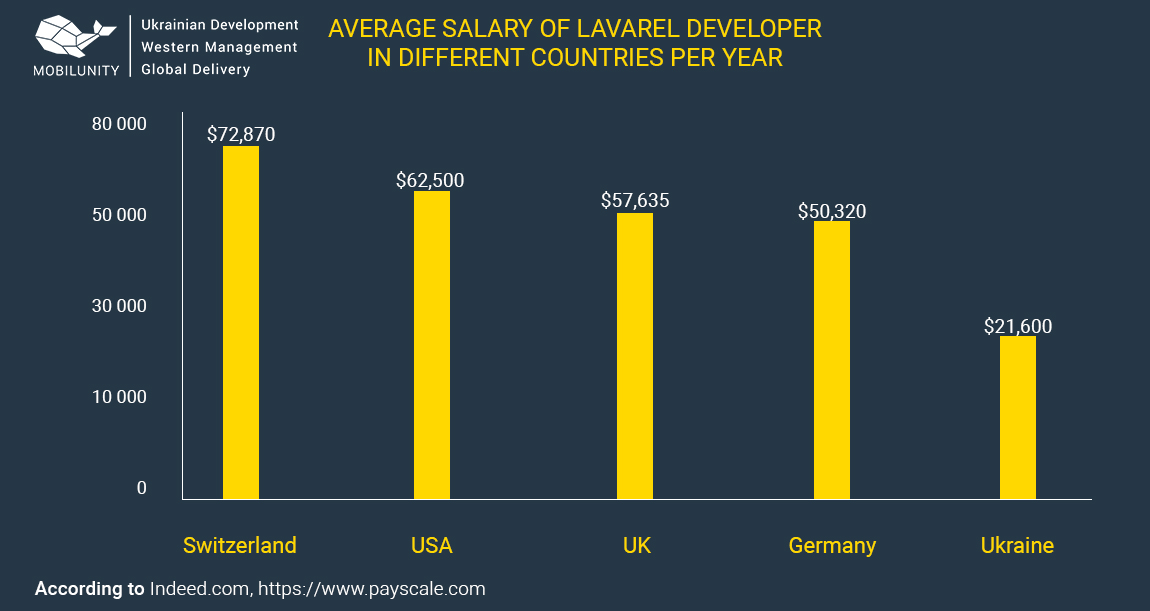 How to Get the Top of the Cake?

A lot of developers think that the years of experience in the Laravel developer resume are the decisive factor when it comes to the evaluation of your estimated salary. However, as the reality shows, there are way more factors that come into play. The most important are the following ones:

So Where Do I Find My Laravel Developer

PHP is on the rise today as the language that’s been written specifically for the web. It’s highly used by startups and small businesses as a relatively cheap and high-performing solution. Some of them tend to develop a custom solution – yet, a lot of companies name Laravel best framework for PHP by many definitions.

In Ukraine, there’s a strong competition between PHP hires which affects the salary on the market. Thus, Ukrainian workforce is one of the most affordable worldwide.

For Laravel developers, it’s impossible to define a single factor that influences the Laravel developer hourly rate. One thing is evident, however – the level of PHP skills and framework understanding is still the most important to employees.

Contact us now to save your budget with Ukrainian Laravel developer salary!

What Technologies a TIBCO™ Developer Should Be Good at

What Do You Know About a Fitbit® Developer? And What Do You Really Need to Know