Home /  Blog / IT Staffing /  Where Are the Best SAS Programmers and What’s the Fairest SAS Developer Salary?

Where Are the Best SAS Programmers and What’s the Fairest SAS Developer Salary?

According to the research conducted by Monster.com, SAS skill increases the SAS programmer salary by more than 17% in the market. Let’s have a look at the importance, demand and SAS developer salary in different countries.

The SAS development platform is a powerful platform consisting of over 200 powerful components mostly used for the data analysis, data processing, and artificial intelligence projects. It is used by over 94% of the global fortune 500 companies. The major components of this powerful software platform include SAS/IML, ACCESS, BASE SAS, SAS Studio, SAS/ETS, STAT/SAS, Base SAS and many others.

According to the US National Institute of Health information, 42.6% of research articles in the health sectors used the SAS analytic software. There would be a huge demand of junior as well as senior SAS programmers in the market, which will be able to even provide the job opportunities to a large number of remote part time SAS programmers across the globe.

Big data and business intelligence (BI) are two major drivers to push the growth of SAS and other data processing and analytic software. According to the IDC figures, the total revenue of business analytics and big data has already crossed the $150.8 billion mark by the end of 2017 with over 12.4% compound annual growth rate (CAGR).

This will even boost the importance as well as the cost of hiring a SAS developer in the marketplace. The senior SAS programmer salary will soar even higher owing to the shortage of SAS skill in the market.

The SAS development platform is more than just a software language, but a comprehensive data analytic and artificial intelligence programming platform. You can accomplish multipurpose software programming along with numerous data analytics and business intelligence (BI) tasks easily. Let’s discuss the comparative difference between a few important languages.

Both Java and SAS are two very powerful software technologies designed for multipurpose software development. The main differences include the following: 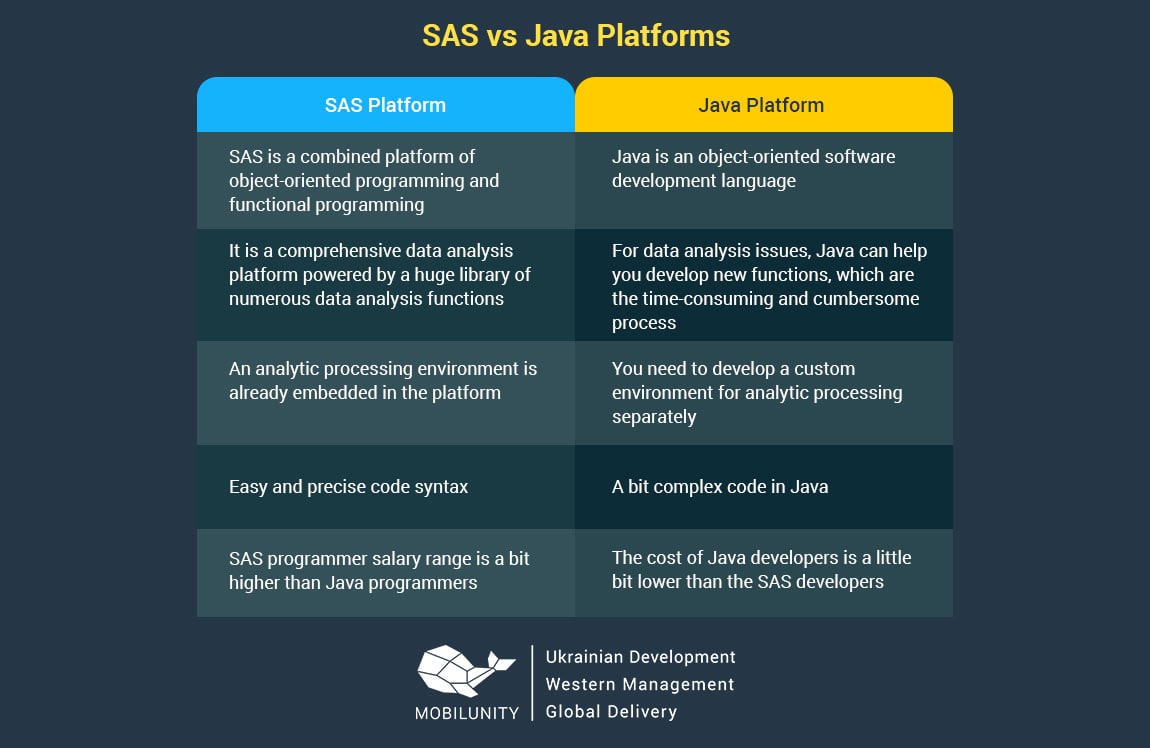 The major differences between these two technologies are summarized in the following table: 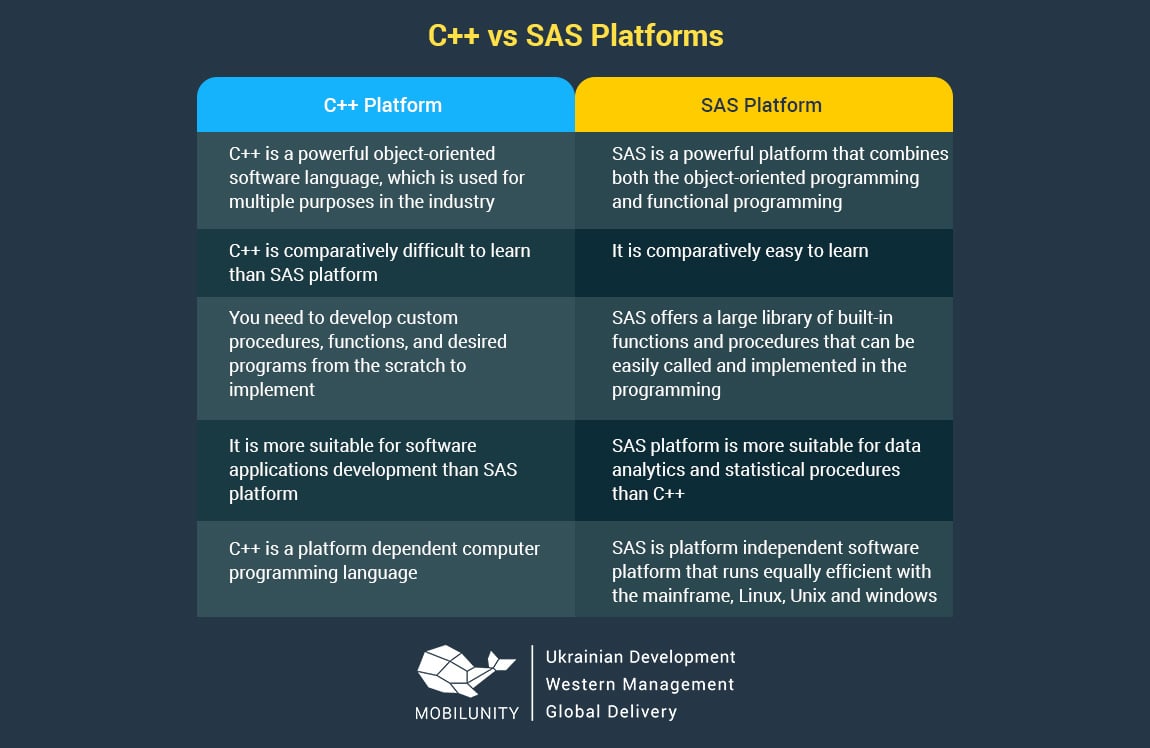 Let’s summarize the main differences between Python and SAS platforms in the following table. 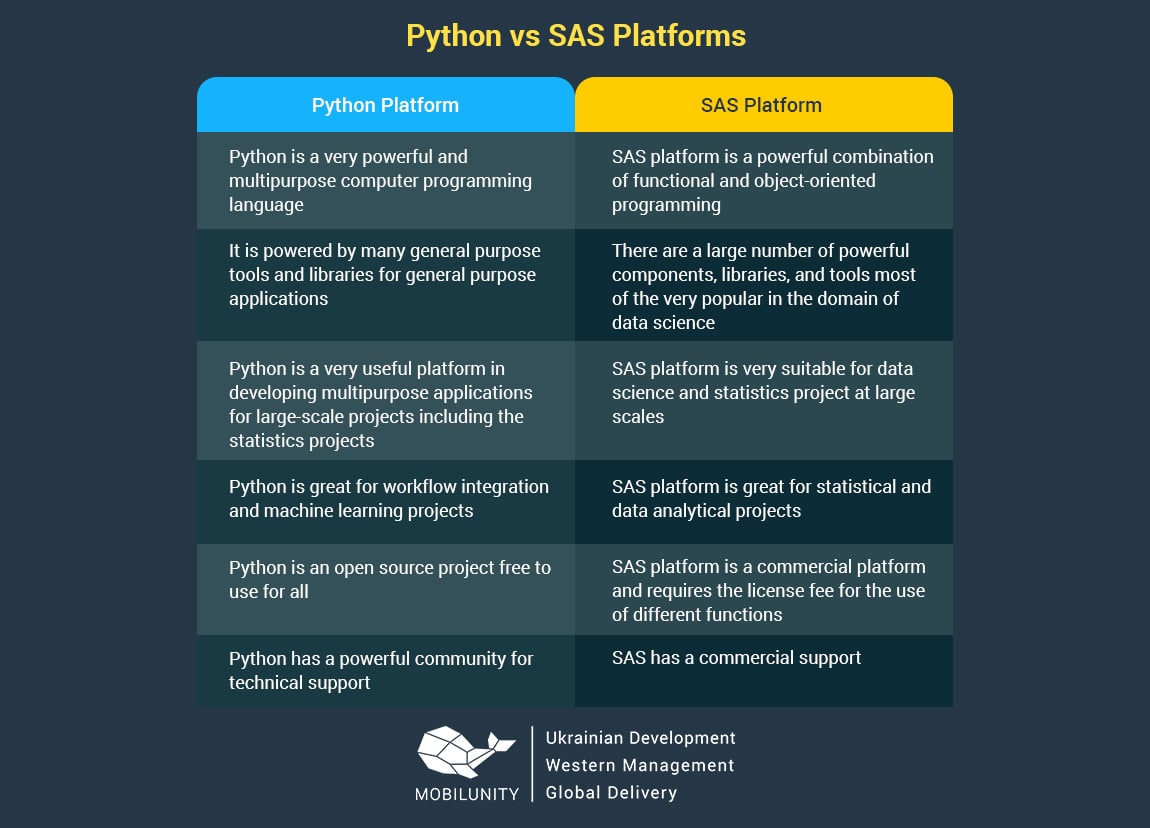 What Projects Are SAS Developers Best for?

The SAS platform is a multipurpose platform, so you can develop any kind of software projects with the help of its powerful libraries and software components. But, it is the market leader in the domain of commercial analytics. The main projects that the SAS developers are best for are described below:

There are many powerful algorithms, tools, functions, and capabilities for data analysis and customer profiling, which makes it one of the top 5 data analytics software platforms in the world. It has introduced numerous modules and tools for different kinds of functions like data sampling, data mining and many other processes related to data analysis. So, you can develop any kind of custom data analytic project with the help of senior SAS programmers with 100% results and satisfaction.

Neural network projects are mostly used for the deep learning and other the information communication purposes. It is a domain of machine learning. The global market size of machine learning is expected to cross the $10.2 billion mark by 2025, according to the Grand View Research forecast. There is a huge scope of automated image identification, speech recognition, learning behaviors and interactive patterns in the software development. All these domains are properly addressed in the SAS platform. So, the projects related to the development of machine learning networks are best to be developed in the SAS platform.

There is a huge demand of things management tools, applications, and automated control systems in the marketplace due to the exponential growth of the internet of things (IoT). According to the Transparency Market Research predictions, the global market size of IoT is expected to reach $1490.31 billion by 2024. The SAS platform is able to handle all process involved in the IoT efficiently, such as data discovery, data analytics lifecycle, data mining and processing at the IoT edge and even in the real time.

The global market size of big data is cruising to reach $42 billion by the end of 2018, and it will cross the $103 billion market by 2027, according to the STATA predictions. The SAS platform is one of the most powerful and capable software development platforms for developing big data management software tools in the marketplace. It has numerous modules like SAS model manager, SAS enterprise miner, SAS visual statistics, high-performance data mining, SAS text miner and many others. Choosing SAS for the big data management projects is one of the right decisions for the businesses.

The total current all level openings for SAS developers is about 1325 jobs. The other companies that hire SAS developers include banks, insurance companies, health service providers and software development services.

So, almost all kinds of companies require SAS developers for their business process automation and creating the competitive advantage for their respective businesses.

Three levels of SAS developer resumes in terms of technical skills, qualifications and professional experience are described below:

The junior level SAS programmer resume should include the following skills, qualifications and experience.

The middle level SAS developer resume should include the following technical skills, qualifications and experience.

The senior level resume should include the following technical skills, qualifications and professional experience.

Struggling to find highly skilled, experienced and qualified SAS developer for your software development projects, we can help you!