Home /  Blog / We Do /  IoT Developer Salary & Rates. How Much Does It Cost to Develop IoT App?

IoT Developer Salary & Rates. How Much Does It Cost to Develop IoT App?

We are in the advent of a fully-connected world, thanks to the vast Internet connecting more and more users through their various devices, such as computers and laptops, mobile phones, smart watches, smart cars, and many other gadgets. More than these, the Internet can now also be utilized by various equipment and appliances, such as smart televisions, refrigerators, home lighting systems, heating systems, and almost every other imaginable thing. With so many devices able to transmit and receive information through the Internet, the potential to utilize and harness these huge volumes of data and process them to improve the overall human experience is limitless. In fact, this potential is now gradually being used for this very purpose.

The Internet of Things or IoT is a collective term used to describe the vast network of various devices, both software and hardware, equipped with network connectivity that allows them to exchange data and connect with each other. In this article, we take a close look at this concept and see more clearly what it can do and how it can help improve just about every aspect of our experience. We are also talking about IoT developers, the specifics of their work and the developers salaries.

Internet of Things and IoT Developer: An Overview

Although the Internet of Things dates back to the early 1980s, the concept of the IoT rose to popularity in 2000, during which a number of promising publications about concepts such as radio-frequency identification (RFID) gained widespread attention. The idea was that people could carry with them some object that has some uniquely identifiable tag embedded in them, and information stored in these tags can then be read by machines to record the activities of these individuals. Collected data can then be transmitted to, and shared with, other machines and even to the Internet, so that the behavior of the individual can be recorded, and the collective behavior of all individuals can be analyzed. This invention marked the onset of a system of interconnected devices that exchange data and mutually improve each others’ capabilities, which we now call the Internet of Things.

As a concrete example, take the case of a smart home. In such Internet-connected homes, the light switches, various appliances, and the gates are connected to the Internet, and they can be automatically activated using an app on their user’s smartphone. Moreover, the app can track its user’s location and automatically open the gates, turn on the lights, and activate the air conditioning unit when its user gets close. These devices are part of the Internet of Things, and they interact with each other to work in harmony.

From just 300,000 devices in 1990, there are now over 23 billion devices connected to the IoT, and this number is projected to just continue its rapid growth. In fact, in 2017, worldwide spending on IoT technologies has reached 1.68 trillion USD, up by 22% from 2016. Demand for IoT developers has also soared, with over 2,888 companies in North America employing over 342,000 IoT development teams, and over 500,000 IoT developer job positions currently left unfilled.

Since Internet of Things involves communication between applications and physical devices, an IoT development team tends to be large, and different developers are assigned in different areas, among these software programming, hardware programming, security implementation, networking, and systems engineering. Being an excellent IoT developer may require one to be flexible, and this will require knowledge in several of these areas, so an IoT developer must have a large set of skills under his belt. Let’s take a look at some specific skills that an IoT developer will need.

Top 10 Skills Every IoT Development Team Should Have

Here are 10 of the most common skills that are demanded of IoT developers.

IoT development involves a lot of hardware prototyping, and for this purpose, it usually requires building a lot of circuits and tinkering with them on breadboards. A good understanding of electronics and the different electrical components like resistors, LEDs, capacitors, etc. is therefore critical.

The Internet of Things consists of devices that have one thing in common: sensors. Without sensors, a device will not be able to collect any data from its environment. Typical sensors used are temperature sensors, proximity sensors, accelerometers, gyroscopes, and pressure sensors. A good grasp of how these sensors work is an essential skill for IoT development teams.

The Raspberry Pi is a small, fully-capable computer that has become very popular among computer science and electronics enthusiasts due to its inexpensive price and the ease with which it allows individuals to assemble prototypes. As such, it is very suitable for use in IoT development.

The Internet of Things will not be useful if the data collected from the various devices are not analyzed. Once a product has been successfully completed, the data it collects has to be organized, analyzed, and processed into useful information that can improve the value of the product as well as those of others in the IoT network.

Just like in any large-scale digital network, the devices in the Internet of Things are also vulnerable to malicious attacks, such as denial-of-service attacks and unauthorized accesses. This aspect of development often gets overlooked, but since much of the IoT devices are embedded in our homes, it should in fact be a top priority.

One of the goals of IoT products is to be usable by everyone, including those who are not very tech-savvy. Therefore, IoT applications must be as user-friendly as possible in order for the product to appeal to a larger audience and become more marketable.

Since the IoT is inherently a large network of devices, IoT products must also be designed to perform optimally for the specific type of network it is meant to be used in. For instance, if it will be used by a lot of people, it must be able to handle a huge influx of traffic. Moreover, it must adhere to the network’s protocols.

We live in a time when artificial intelligence is no longer just a myth, but a reality. Machine learning is a primary contributor to its success, as it allows machines to learn from large volumes of data in order to tackle new problems. With IoT transmitting huge volumes of information, machine learning is sure to offer limitless benefits.

Here are 5 tools that developers can use to create IoT products.

Arduino offers a development kit with both software and hardware components, and is among the most popular tools for electronics prototyping. It’s open-source, meaning the design of its hardware and the codebase of its software are available to the public.

The Eclipse IoT is another open-source tool that provides developers with the technology to build IoT devices. It’s the collaborative product of multiple organizations and individuals aiming to create an open-source IoT platform for everyone, including the Windows IoT developer and Microsoft IoT developer.

IBM’s very own IoT platform, Watson IoT can be used to include predictive capabilities and machine learning into IoT products. It features object recognition, sentiment analysis, and natural language processing, among others.

Short for “if this then that,” IFTTT is a free and convenient IoT tool that allows different devices to communicate with each other. It provides support for a wide range of components, and it provides a large number of applets and services to control these components.

Zetta is a free, open-source platform for creating IoT servers. Written in Node.js, it turns every device into an API, and combines technologies such as reactive programming, REST APIs, and WebSockets in order to handle data-intensive applications.

If you’re planning to hire an IoT development team for your business, you might be wondering: how much does it cost to hire IoT developer? The first practical step would be to search for the place that offers you the best IoT developer wages. As such, it will be good to compare the cost of IoT developer in different countries and see which one offers the lowest rates. Let’s make a comparison using PayScale as our data source. For this comparison, we compare the salaries of software engineers in different countries, since data specific to IoT engineers are currently unavailable. Note that since IoT engineers may require additional skills over the usual software engineering skill set, the amounts may not be accurate, but our comparison will still give us the relative rates of developers across different countries, be it software or IoT engineers.

PayScale reports the stats on how much IoT developers earn in various countries: 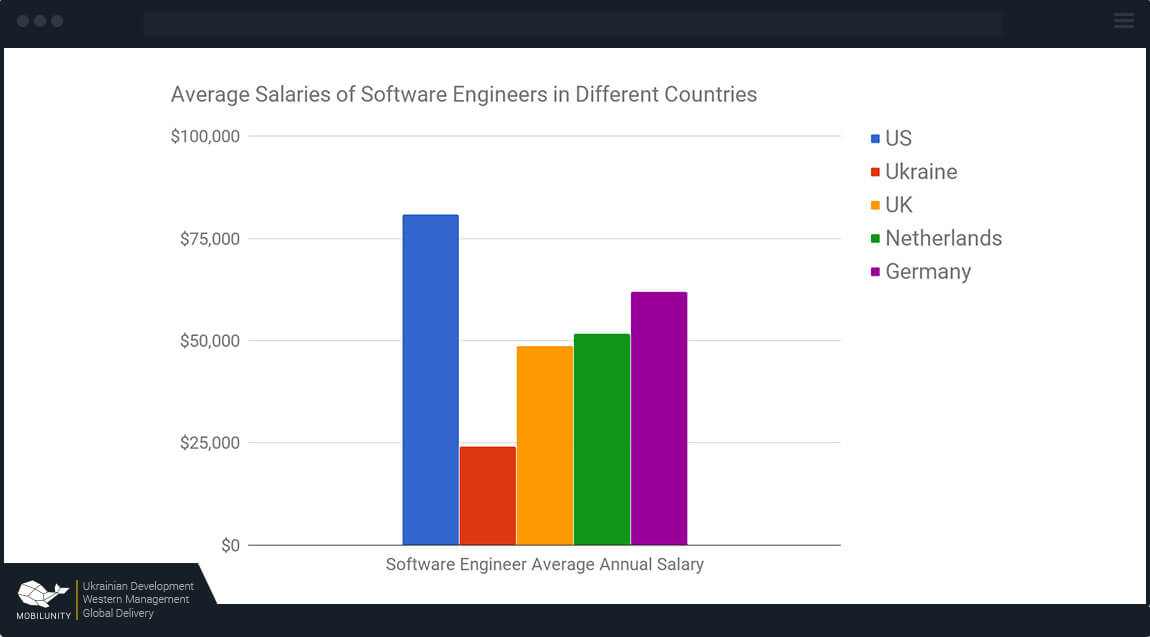 It is evident from the above numbers that of all the countries we have examined, Ukraine offers the best rates for software engineers, allowing you to save up to $56,710 per year for each developer you hire. From this, we can infer that Ukraine offers the most affordable IoT developer rates as well, offering similar potential savings.

The Internet of Things harnesses the power and ubiquity of the internet, allowing us to integrate technology more deeply into our daily lives through various Internet-connected devices, gadgets, appliances, and infrastructures. We’ve taken a close look at the technology, several tips on how to look for a competent IoT developer, as well as the typical IoT developer salary. Now, you’re ready to hire!

If you’re looking to hire an IoT developer and wondering where to look, then you’re in luck, because we have just what you need. We are Mobilunity, a Ukraine-based provider of dedicated IoT developers, as well many other types of developers skilled in a wide range of technologies and tools. We offer Europe’s best developers for the absolute best rates!

Check out also our related article about Yocto developers!

Save up a lot with our affordable and fair IoT developer salary!

Dedicated EduTech Developers. Who Are They?