Home /  Blog / IT Staffing /  How to Differ Frontend Developer from UI Developer?

How to Differ Frontend Developer from UI Developer?

If we look at the web development arena, we will find a big demand of UI developers, designers and UI engineers round the globe. The main driver of this big demand is the great benefits of user interface development in all kinds of software applications and websites.

Every small and big organization is focusing on achieving greater user experience through easy and attractive user interfaces. According to The American Genius, every $1 dollar invested in improving user experience returns $2 to $100 in a very short period. The web UI developer is one of the core roles that helps enhancing user experience.

In web development, the user interface (UI) is the outlook of the web page that the users interact with while visiting any website or software application. The user interface is designed for the visitors to accomplish their task easily without any confusion to enhance user experience. The user interface includes multiple components of a web page such as, screen, images, menu, button, icons, checkbox, input fields, call out, animation, and others.

According to IBM research information, any $10 invested in the ease of use of any product will return $100. Another research conducted by Forrester suggests that about 16.6% of the online user with good experience on your website will recommend your products to others.

What Is UI Frontend Developer?

What Is Difference Between Frontend Developers and UI Developers? 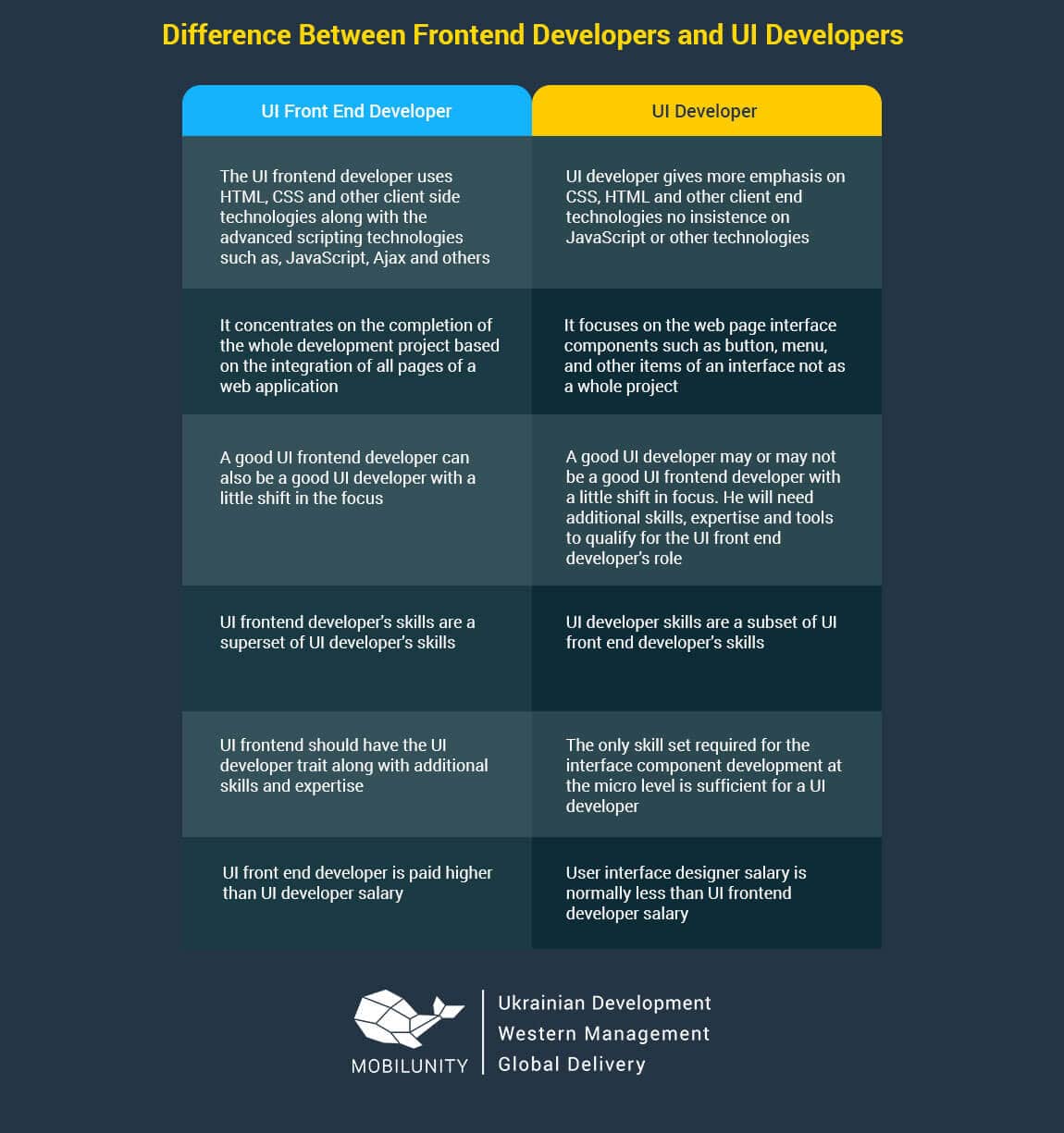 Who Is in Great Demand – UI or Frontend Developer?

The latest survey pertaining to the hot skills in the technical job market conducted by the Computer World suggests that the web development is the 6th hot skilled job in the domain of information technology. A bigger portion of this demand is about UI front end developer jobs.

Meanwhile, according to CEB’s global report about the global hiring demand information, JavaScript is the most demanded skill in many major countries like Germany, US, UK, China and others. It is most commonly used in the web development by the UI frontend developers. According to the Quora answers, the UI front end developers are in high demand as compared to the UI developers.

The demand of UI frontend developers is much higher than the normal UI developers due to many good reasons. The first and most important one is that small and medium size companies prefer multi-tasking of technical resource, which is easily possible by hiring a UI front-end developer who will also be able to fulfill the responsibilities of a UI developer.

The second important reason is the demand of skill sets and technologies. JavaScript, Ajax and other such kinds of technologies are in great demand in the marketplace which is a part of UI frontend developer’s resume.

As we notice that a substantial increase in the user experience designer salary in the recent years along with the UI front-end developers, which is driven by the excellent work performed by those professionals. A few importance portfolios of UX and UI programmers are given below. 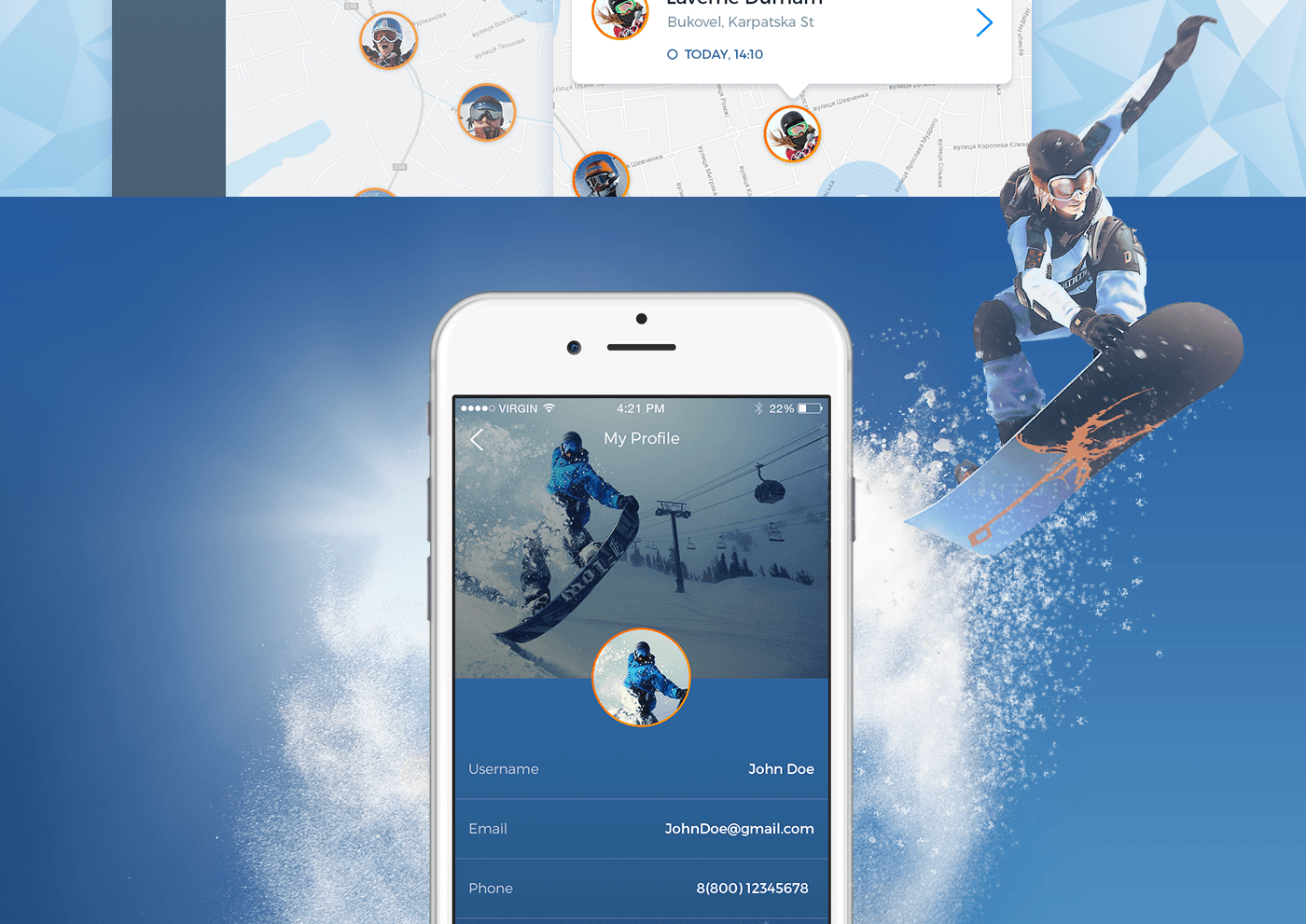 This is a useful mobile app used for tracking the position of friends during winter sports, especially skiing. The main features include: 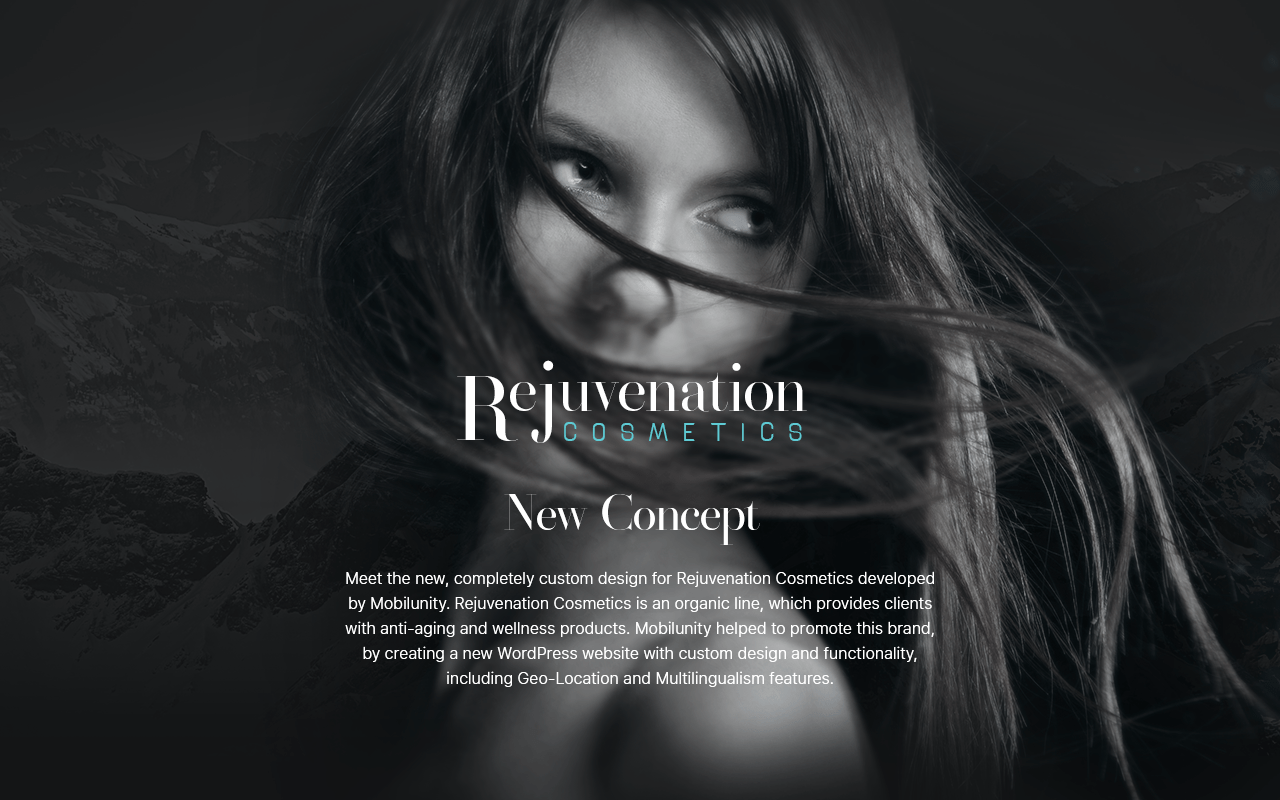 This is one of the trendy and new concepts of website designing developed by UX designer developers at Mobilunity. The main features include: 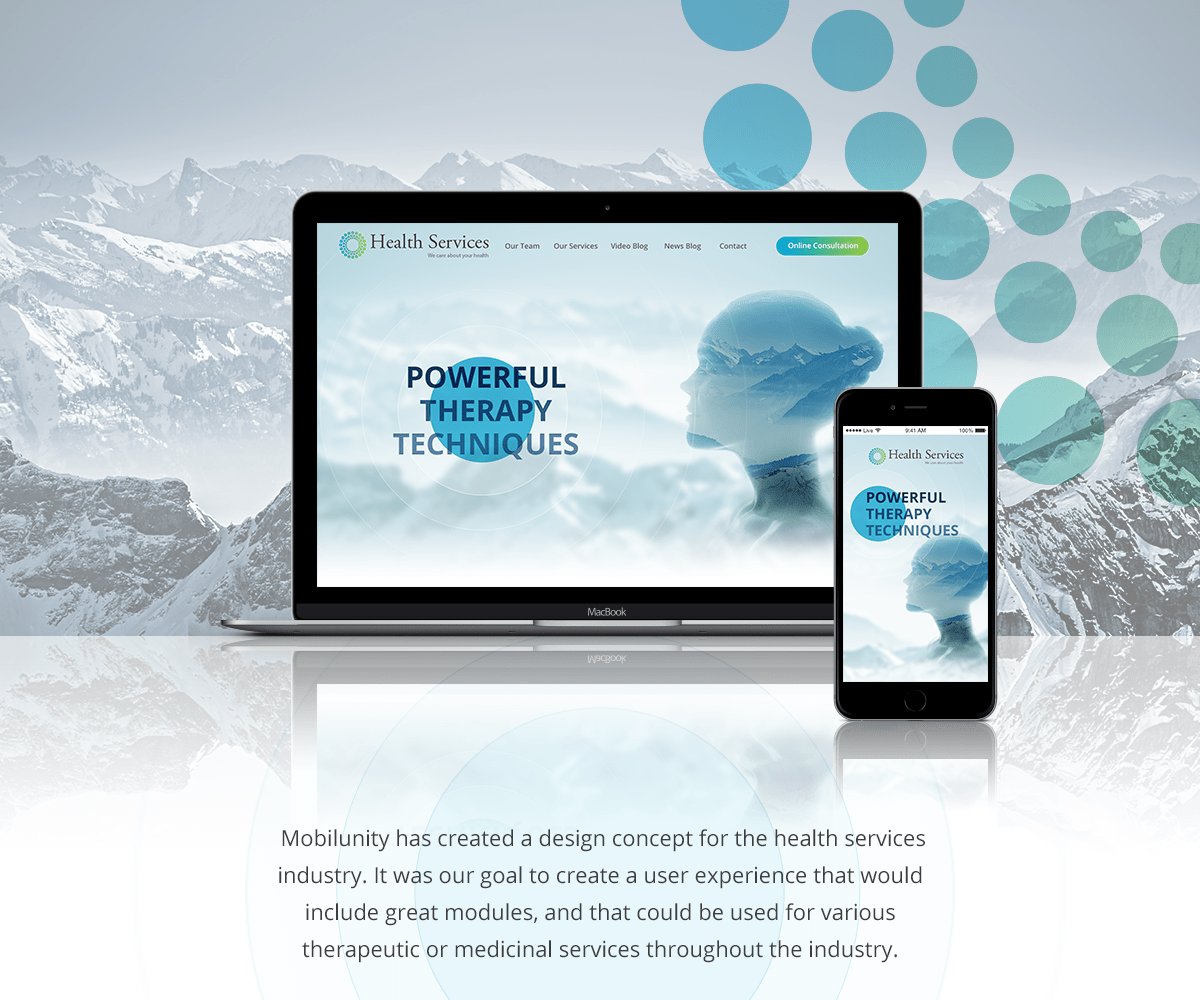 It is an innovative concept for healthcare websites. Highly featured and industry specific capabilities include: 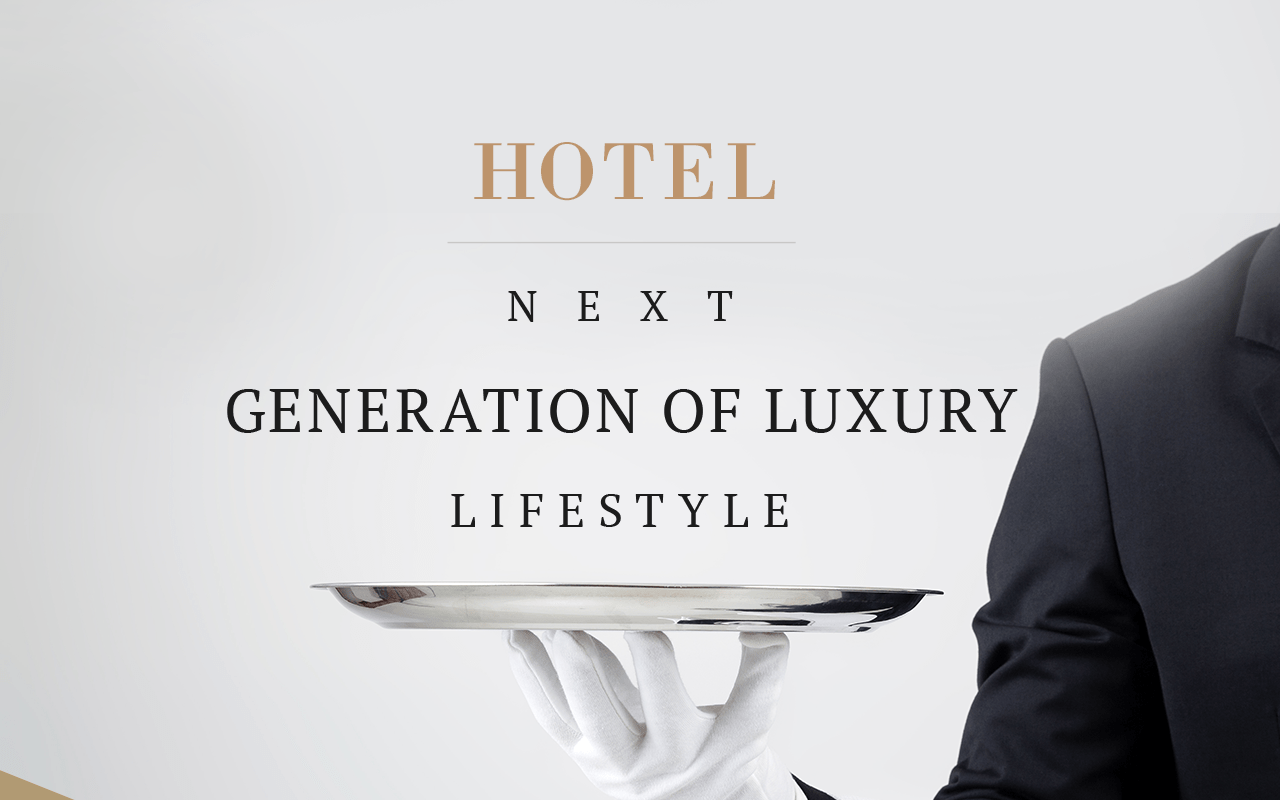 This is a new website design created for hotel business. It is powered by many features and capabilities such as: 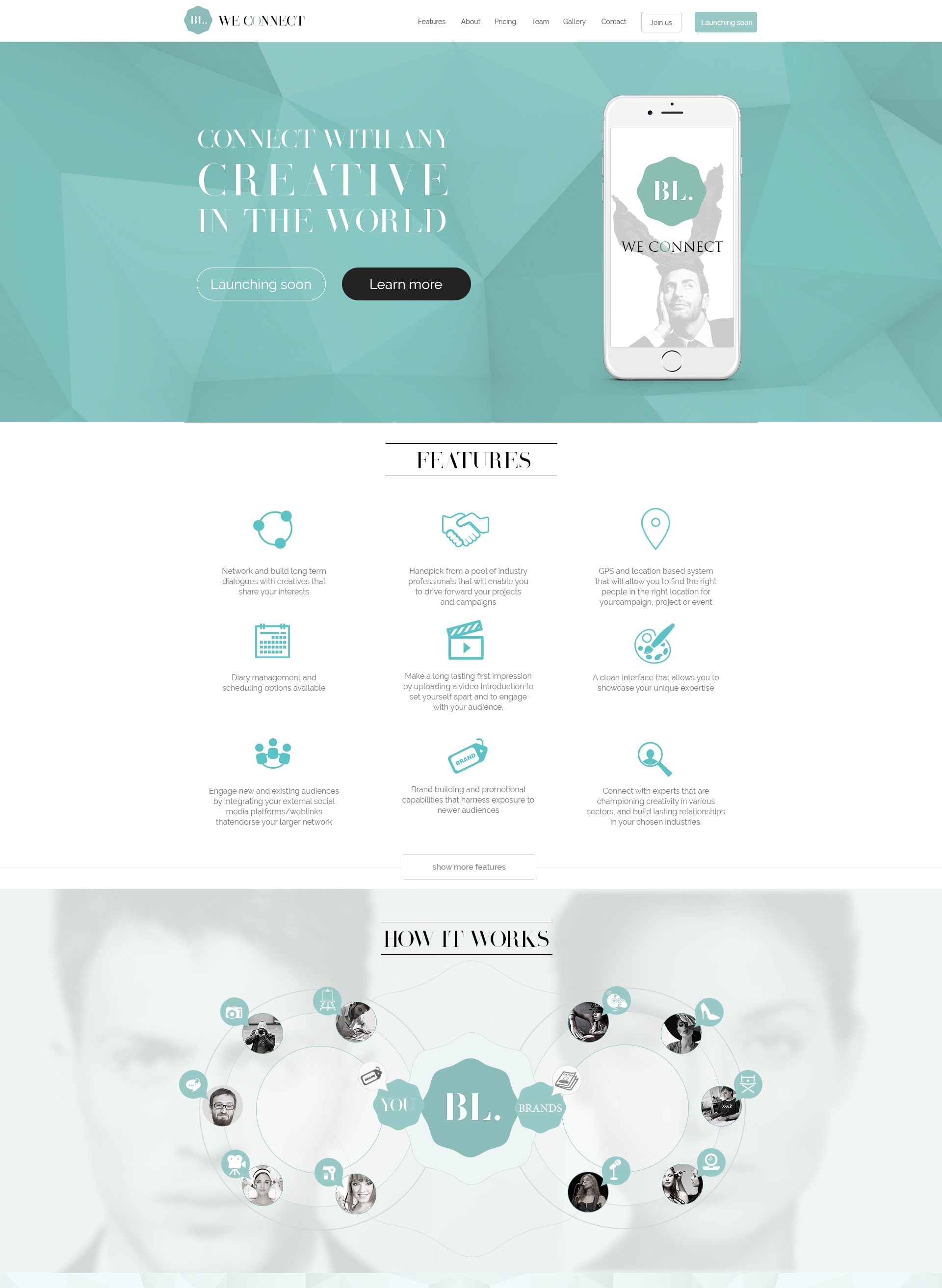 It is landing page for a mobile app. It is a highly featured website. The main features of this website include: 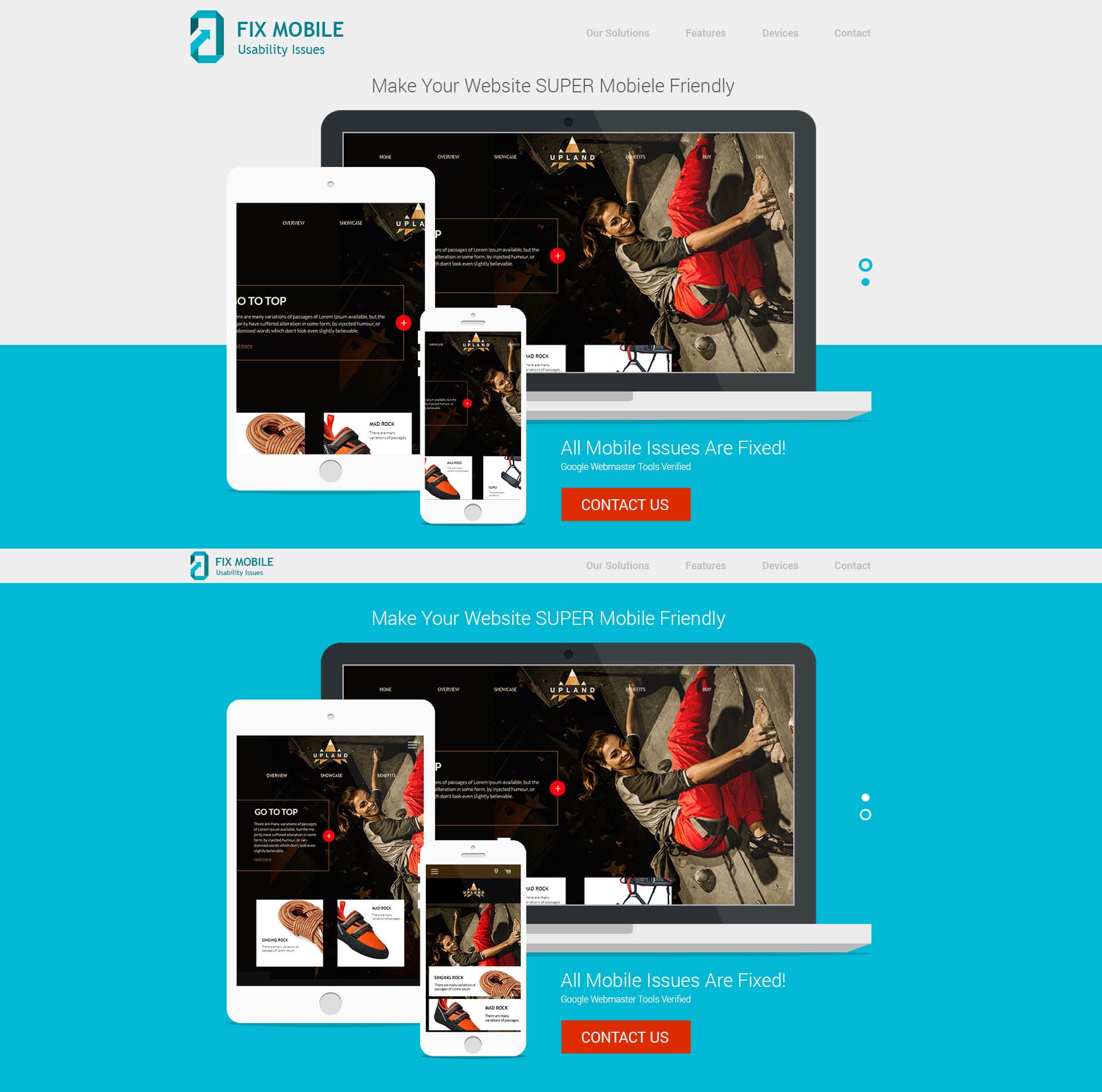 This is a web application that helps the users to fix their website issues to work with mobile devices easily. The main features include:

Let’s expand on the skills, qualifications and experience UI UX developer resumes in the context of frontend UI developer and normal UI developer.

The UI frontend developer resume looks like a mixture of UX designer resume and UI developer. The user experience salary is growing very fast due to the requirement of new skills as listed below.

The UI programmer should be an expert on the micro level coding of the website. The main skills and qualifications of a good UI coder resume should include:

Why and Where to Choose UI Frontend Developers?

As discussed earlier, the demand of UI front-end developers is very high in the marketplace that pushes the senior UI UX designer salary to the new heights. The main reason to choose UI frontend developers is the skill sets they possess and the great user experience they produce for the end users. It is always recommended to choose the professional grade UI front end developers for your web development projects.

You can hire the UI frontend developers and UI developers via multiple ways, such as Freelancing, Local Recruitment and OutStaffing. Freelancing is good for cost saving, but this mode of recruitment has many other risk factors, similarly local hiring is more desirable, but it very costly and legally complex. For example, the senior UX designer salary is over $100 thousand per annum.

So, the best tradeoff between reliability and cost is the outstaffing form of recruitment. You can get professional grade Ukrainian UI frontend developer service from the Mobilunity services at very affordable prices.

How Much Does It Cost to Hire a C++ Developer in Ukraine?