How Zend Developer Can Be Useful in Your Project

PHP developers form one of the largest and most active developer communities. PHP technology has numerous tools for almost any programming task imaginable, including a plethora of web development frameworks. This has led to incredible technology diversity among companies that use PHP or hire dedicated PHP developers. You are as likely to find a company with a Symfony developer team, while a similar company will opt for Zend, CakePHP, or another framework for its projects. In this post, we will take a look at Zend development, it’s effectiveness and specific features that can make your project stand out from others.

Overview of Zend Development: Basic Information About This Technology

Zend is one of the oldest and PHP frameworks that uses an open-source BSD-style license and is still in high demand. This makes it unrestrictive to use, modify, and repackage the framework code It was launched in 2006 by the Zend Technologies company.

With Zend, in particular, certain web applications become stunningly simple to create when you use this framework. In short, Zend will work great for your project if you are looking for the following combination:

By this time, being a package of professional PHP packages, Zend Framework got more than 345 million installations. This technology is used for a wide range of projects from web applications to fully independent services based on PHP 5.6+ with object-oriented code with a great number of language options available. Comparing to previous versions of Zend Framework, they were downloaded 15 million times only that says of a significant upgrade of the technology last year.

If you are interested in technical aspects and workflow of Zend framework, take a look at the following mentioned by Project Lead of the company Matthew Weier O’Phinney:

It is worth noting that the technology is provided by Zend that is owned by a Rogue Wave Company, but a number of developed components and added features were created with a help of support of Zend developers community and contributors. Zend technology is known for one of the most supportive and responsive programming community that cooperates on forums, IRC channels, and even group chats. Such famous companies like Google, Microsoft, and Sound Strategies PR use Zend development for building web interfaces and applications and nowadays, there are 12,348 companies in total referring to Zend software development. A full statistics on Zend technology usage you can find here.

Therefore, based on the experience of successful companies, hiring Zend certified developers can greatly improve your PHP projects by allowing you to develop high-quality web applications faster. In the absence of Zend, your team might struggle on settling on a proven and tested development standard. Zend framework proved to be all-in-one solution for PHP-based projects.

The Latest Updates of Zend Framework for You to Note

According to Zend Framework blog, the latest release of Expressive 3 was launched on March 16, 2018. On the date of this release, it was informed that Expressive 3 requires at least PHP 7.1. A few months later, developers launched Expressive 3 complete version that can support all components of PHP 7.2 and connect to Apigilty modules. Now, the company works on finalizing and updating existing API-related modules for Expressive 3 version and plans to complete this task in the nearest months.

The base package was changed a lot: now if operated coordinating actions only, while a greater part of the code itself was put in a semantic affiliation or moved to a newly created packages. The base package is responsible for a user-friendly interface that helps to build application routes and pipeline. It worth noting that command line tools were improved as well allowing programmers to use the features in a simpler way. The updated creating request handlers and template support were reconsidered based on programmers’ feedback.

In Expressive 3, developers added a bunch of new features, also accessible by any PSR-15 framework besides Zend, including:

It can be clearly seen that the latest, third version of Zend framework was updated and extended based on requests and suggestions of Zend programmers community. This way, the framework became more powerful and useful in terms of a variety of features and possibilities. No wonder that the number of Zend developers grows each year accordingly.

What Are the Advantages of Using Zend Technology?

The use of Zend software development is mainly for creating large-scale web applications. It ranges from content management systems, corporate websites, and enterprise apps, all the way to end-to-end e-commerce solutions. For example, the following applications are all developed on top of Zend:

There are several important ways how Zend software development can be useful in a PHP project:

A small team of developers that knows the framework well can be more effective than a larger team using alternatives. This is because the long-running history of Zend programming has created one of the most stable PHP software libraries. You are less likely to run into bugs in the framework itself than with a newer, less well-tried framework.

The salary of a Zend developer varies widely depending on location. This is one reason why it can be so beneficial for a client to look abroad when hunting for talent. Taking into consideration the US and Canada specialists, a Zend certified engineer salary reaches $69,683 and C$63,860 ($48,137) accordingly. Despite the fact that Zend developer salary in New York is higher than in Illinois or Texas, the range is not that big. Therefore, many companies tend to hire remote programmers from Western Europe.

In London, for example, a Zend developer earns an average GBP 45,000 according to ITJobsWatch. This amounts to approximately $57,821 at current exchange rates. According to Stack Overflow, the average Zend development cost for Germany is around $41,400. In Poland, on the other hand, Zend salary is around $33,000 based on estimates from salaries posted on 4Programmers.net. Besides the US, rates of Western Europe programmers are pretty high as well. But there is one country known for exceptional experts in Zend development for hire.

In Ukraine, Zend certified programmer cost is an approximately $23,601 based on Payscale data. At the same time, Ukrainian developers are one of the most demanded in-house and remote programming specialists all over the globe. Why hire a Zend developer in Ukraine? Of course, to get a great looking and working project at an affordable cost and short time.

The Essentials Skills of a Zend Programmer

In order to hire Zend programmer talent or find PHP developers for hire, you should consider the following ways in which you can accomplish this. If you are in search of a strong example of Zend developer CV to take into account, check a resume pool here. Also, you can check there an average Zend developer salary on the market.

Now, you know what skills and knowledge should a well-qualified Zend programmer have. It is time to look for a remarkable specialist and finally hire Zend framework developer to contribute to your project. You have already noted about Ukrainian coders, right? 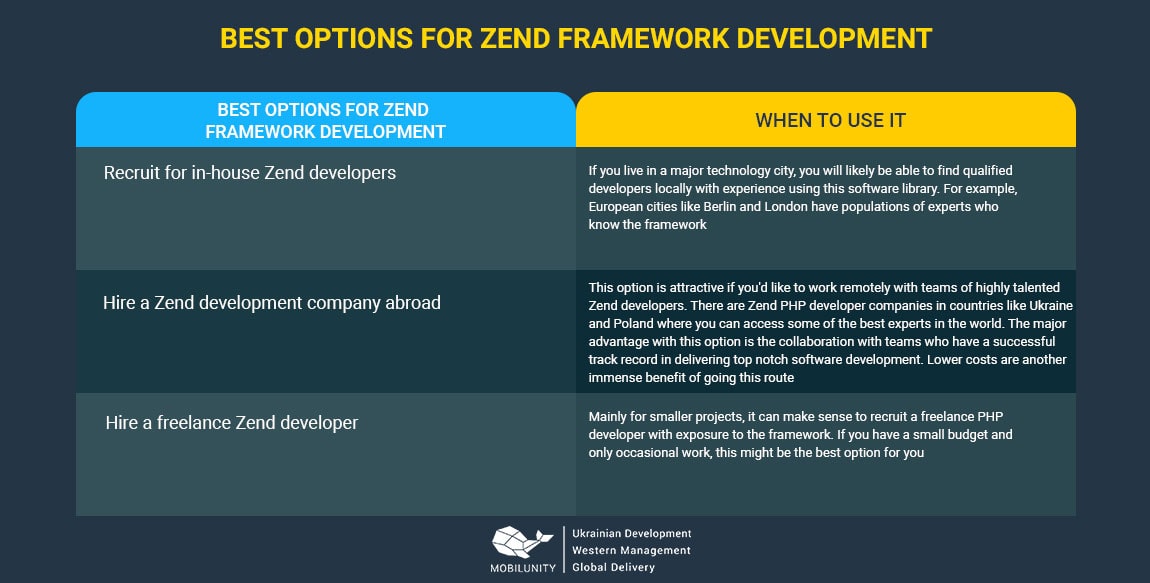 Is It Easy to Hire Zend Framework Developer in Ukraine?

If you don’t know how to hire a Zend developer from Ukraine, here are a few links that will help you find the right specialist:

Though Zend is not a wide-spread technology and requires special subject matter specialists, there is a number of Ukrainian Zend developers looking for project development to start or join. It is important to note that many Zend programmers tend to work in teams within development companies in Ukraine. Therefore, if you need an experienced and reputable Zend coder, take a look at Ukrainian development companies working on projects on outsourcing.

It is worth noting that part of fully Outstaffing development tasks proved to be the most beneficial way to complete a project shortly. Take a look at the undeniable advantages of outsourcing project development:

And this list can be continued with a number of other benefits that Outstaffing brings, so it is a wise decision to fin, and hire an experienced and highly qualified Zend software developer to assist you in building your project.

Consider yourself fortunate to have already found a team of highly qualified professionals in Zend development. Mobilunity is one of the most reliable and fast growing development company in Ukraine with a number of successfully launched projects and developed applications. Our dedicated team of Zend coders will gladly help you with development tasks and the final product will be forthcoming.

Hire Zend framework developer in Ukraine with Mobilunity! Our team would love to help you with all your development needs. Have any questions – feel free to contact us!

How to Hire Developers in Germany without Spending a Fortune

Ukrainian or Bulgarian Developers. Whom to Hire?