JavaScript is the most used programming language, and its pervasiveness has naturally led to the creation of countless JavaScript frameworks, all aiming to help JS developers become quicker and more efficient at JavaScript programming.

In the crowded space of JavaScript frameworks, AngularJS is without a doubt one of the biggest and most well-known players. Developed and maintained primarily by tech giant Google, this should come as no surprise. To date, three major versions have been released: Angular 1, released in September 2009; Angular 2, released in September 2016; and Angular 4, released in March 2017. You may read more about the Angular from our blog. In this article, we look into more details on hire Angular developers.

Let’s take a look at the Angular framework’s usage and reception by Angular 4 developers across the globe.

The GitHub repository for AngularJS, which corresponds to Angular 1, remains to be one of the most popular among all JavaScript frameworks on GitHub. It has 1,602 contributors and 56,864 stars as of writing, the largest community of developers and the third highest number of GitHub stars. Not far behind is the GitHub repository for Angular, which comprises of both the 2nd and 4th releases, with 521 contributors and 29,602 stars. Considering that Angular 2 and 4 are both less than a year old, these figures are very respectable.

According to Google Trends, interest for the 4th version has dramatically risen in March 2017, the month of its release, and continues to rise to this day. Across the globe, interest in the 4th version is the highest in China, Macedonia, Israel, Nepal, and India. 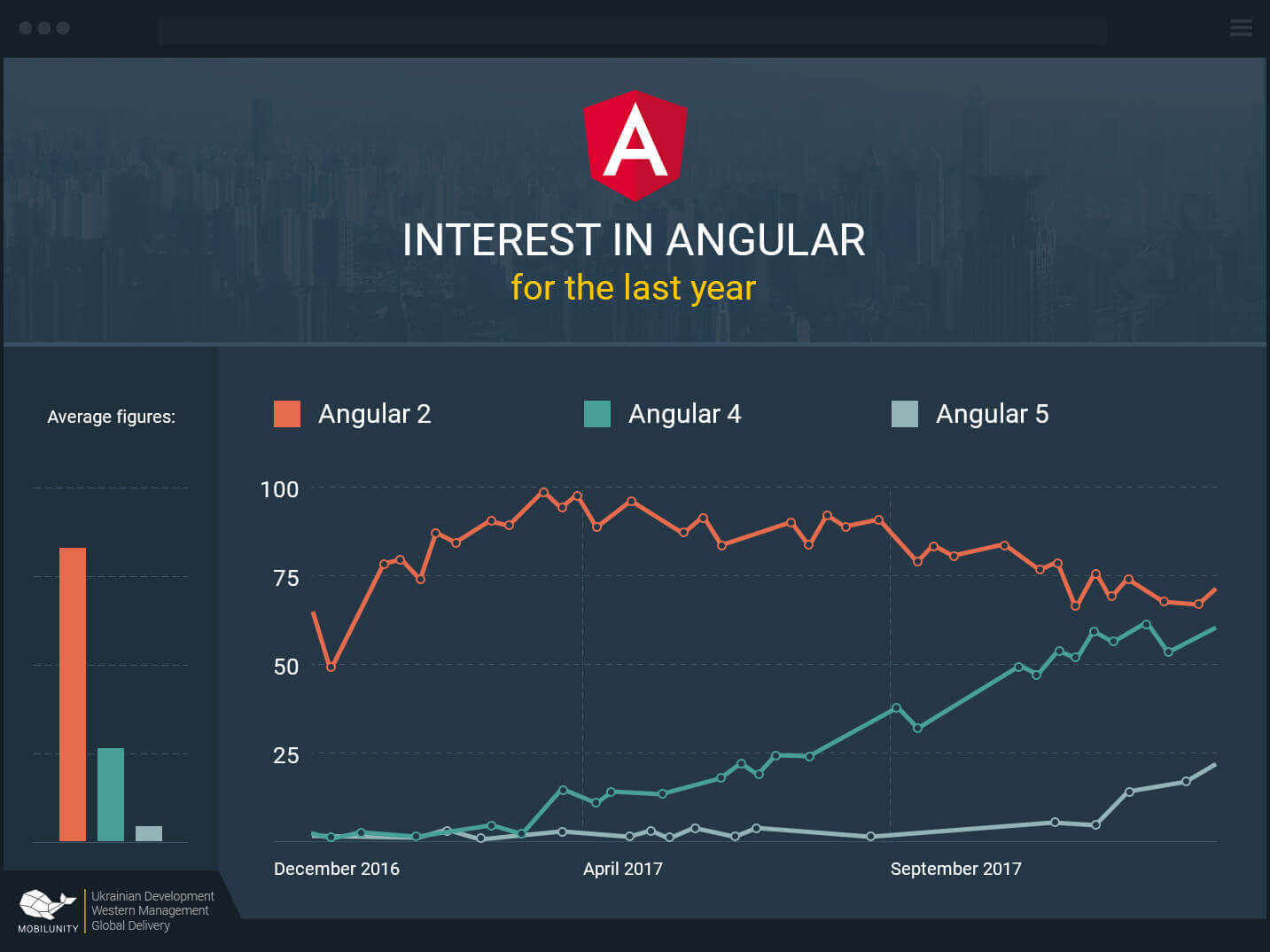 Angular JavaScript is one of the most popular and widely-used front-end development frameworks. Despite AngularJS being the earliest release, the demand for such developers still continues to be high. According to Google Trends the trend in the interest in the discussed technology and its subsequent releases – Angular 4 and Angular 5 – for the last 12 months. It is evident that interest in the second version is far more popular than in the fourth in all countries, at least in terms of Google search count. This, of course, may very well be because the 4th version is new (released this year), so it has plenty of time to catch up to the popularity of the 2nd version. Still the interest in the subsequent release is climbing towards, or can even go beyond the popularity of their predecessor. This tendency refers to Angular demand in Europe as well. Being among the most popular and loved frameworks in 2017 and due to the successful subsequent releases of Angular 4 and Angular 5 that continue to be popular, it can be expected that this framework will continue to be among the most popular and loved frameworks next year as well.

With the increasing trend in the popularity of this technology the market for hiring Angular 2 and Angular 4 developers have become very competitive. With the increasing demand for skilled and experienced Angular programmers, a lot more countries are interested in building their Angular development workforce.

If you’re thinking of hiring an Angular JavaScript developer, it will be wise to compare the AngularJS salary in different countries. This will prove very helpful in deciding where to avail Angular 4 service from. In this comparison, we use PayScale, which lists self-reported average gross salaries in various occupations. We look at the Angular programmer salary, and this includes all version of: the 1st, 2nd, and 4th. Here are the values from some countries:

It’s very evident that  Angularjs salary, much less than hiring from most other European countries. Note that the above figures are self-reported, so they may not be very accurate, but they nevertheless give us a good picture of the relative costs of hiring developers in different countries. From the above data, it’s evident that the most practical choice would be to hire Angular 4 developer from Ukraine.

Cost Analysis of Frontend Developers skilled in Angular 1, 2, 4 and 5

We have looked more closely at the  Angular js developer salary in Europe, Asia, as well as some states of the United States for you to be aware of the tendency. This will help you to choose the best country to build a dedicated development team at.

Below are the average annual Angular 2 developer salary from some of the European countries:

It is evident from the numbers listed above that Angular(JS) programmer salary in the Netherlands is the highest $55,700, even surpassing the Angular developer salary in the UK (London), which is $45,921. From the numbers above, it can also be said that Ukraine offers the most affordable and cost-efficient option of hiring a remote Angular(JS) or 4 developer in Europe.

Below are the average annual Angular 2 developer and Angular 5 developer salary in Asia, the largest continent in the world:

From the numbers themselves, it can be said that Asia is able to compete with the European market for Angular 2 developer salary. For example, Angular(JS) jobs salary in India is the lowest. An average annual Angular(JS) jobs salary in India at $7,528, still it is not very convenient to build a development team in India as it is not the best location in comparison with European countries and the level of English of most developers is not the best one.

Angular Programmer Salary in the USA

Below are the average annual Angular 2 developer salary and Angular programmer salary in some of the major cities of the United States.

Here is more detailed research which outlines the average salary of Angular developers from various countries around the world. It also shows a comparison of Angular 2 vs AngularJS vs Angular 4 developers salary.

Having compared an AngularJS developer salary in Canada, Europe, Australia, and the USA, it is now evident that Angular 2 and 4 developer rates are the highest in the United States.

Based on the numbers above, you can see that a salary for AngularJS developers is much lower than an average salary for Angular developers. Also, comparing the rates stated above, it is evident that the rates of experts skilled in the 4th version of this framework are a bit higher than an average Angular programmer salary in most countries. It is now evident that salary for AngularJS developers is the lowest than of other experts, but it should be also considered, that the average salary of a programmer depends not only on the location of programmers, but also on their experience. Senior Angular developer salary is higher due to the experience and skills that they bring with them and this doesn’t depend on the country.

We highly recommend checking the rates of Angular developers in Ukraine as well in case you are looking for ways to build a short-term project with the help of remote developers. Below is the picture with average gross rates of UA programmers: 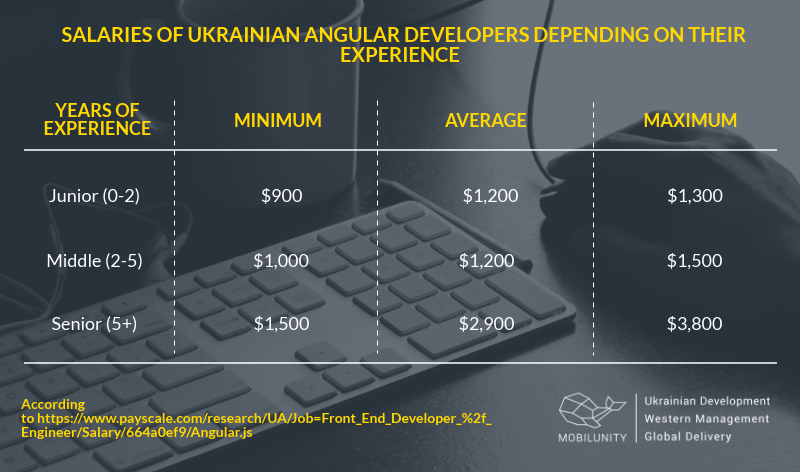 From the picture above you can see that salaries of UA devs are quite affordable in comparison with other countries. Moreover, if you decide to cooperate with Ukrainian remote development team, you will get a lot of advantages such as: costs saving and reduction, good geographical location; flexibility in extending or reducing the team any time due to big pool of talents available in Ukraine etc.

Angular Developer for Your Project

We have explored Angular 4 and we have seen that the reception of developers worldwide to the framework shows that it indeed has strong potential. Hiring Angular 4 developers brings many benefits to any web application project, and Ukraine has proven to offer the lowest rates for Angular 4 service among all the countries compared.

Looking for developers?
Get the rates of Ukrainian Angular developers right now!

If you’re planning to use the 4th version in your next project, don’t hesitate to hire from Mobilunity. As a provider of dedicated developers, we have excellent developers skilled in Angular 4 and many other technologies, including Angular 4 for Java developers. Located in Ukraine, the great talents we provide come at very affordable rates.

Contact us now to find the ideal Angular developer for your project!

How to Choose Your WordPress Consultants?

What An Ideal Node JS Developer Resume Should Contain?

Does remote team affect your business cybersecurity? The greatest misconception