Home /  Blog / We Speak /  What Is The Best European Country For IT Outsourcing?

What Is The Best European Country For IT Outsourcing?

If you are managing a Company, no matter whether it’s a small firm or large corporation, you may be asking yourself if IT outsourcing in Europe is for you. According to the Central and Eastern European Outsourcing Association, there are 5 main reasons to start Eastern Europe IT outsourcing. But the most important question is – what country you should choose to be satisfied with the quality of work. As you know, there are many authorities that have their own rating systems and statistics. Statisticbrain.com has made it’s own list of “Top Rated Outsourcing Countries” with statistics that included workforce, resources/skills, cost index and overall rating. According to their research, there are great outsourcing destinations in Eastern Europe, including Bulgaria, Lithuania, Estonia, Poland, Czech Republic, Ukraine, Romania and Latvia. More than half of all Eastern European countries are ranked among the  “top rated outsourcing countries” by their standards. I encourage you to check out the article yourself and judge what statistics are important for you and your business. One thing is clear, Eastern Europe IT outsourcing is definitely something you should consider.

While numbers back up Eastern Europe’s title as the world’s outsourcing leader, statistics are not the only reason to consider choosing your next dedicated team in the region.

What is the top reason for global outsourcing of it services?

Here are the factors that make companies outsource research and development to Eastern European firms.

Eastern Europe boasts a high-quality, robust university system that prepares professionals across all major tech fields – software engineering, testing, data science, and so on. In some Eastern European countries, like Ukraine, graduating as a software developer takes 4 years, as opposed to 3-year degrees at Western European colleges.

English is taught at schools everywhere in Eastern Europe. Other than that, tech college graduates take professional English courses and are well-versed in IT slang and terminology. Thus, there’s a low risk of misunderstanding between the main office and an Eastern European dedicated team during IT outsourcing for small business.

Apart from being generally well-versed in tech, Eastern European teams have unique practices and innovations that would benefit any business. In case you are wondering how does IT outsourcing work in Eastern European countries, the region hosts research and development centers for global tech giants – Huawei, Dell, Deloitte, Google, Microsoft, and more.

Eastern European dedicated teams are located in close proximity to major tech hubs – Berlin, London, and Paris. That’s why hiring a contractor here will not complicate your approach to how outsourcing works in IT solutions.

A common answer to ‘What is top reason for global outsourcing of IT services?’ is that the time zone difference between Western and Eastern European teams is insignificant – one to three hours. Thus, company managers can schedule conference calls effortlessly. American companies have an eight-hour difference from Eastern Europeans – it’s a manageable gap, as opposed to the ten-hour difference between the US and India or an eleven-hour gap between the United States and Vietnam.

Eastern Europe is a large area with different languages and customs, so you may wonder which location is best for your outsourcing needs. I can say without any doubt, the country you should choose, is Ukraine. Why Ukraine? Because it has more than 3,500 ICT providers and over 1000 IT companies. Because it is recognized as the #1 software engineering force in Central and Eastern Europe. Two weeks ago, our colleague Alfonsine Williams, an American living in Ukraine, made a list entitled “why choose Ukraine for your IT outsourcing”. He offers a different point of view, and proves that we are not here to praise or glorify ourselves. We support our claims with facts. Check our infographics on outsourcing to Eastern Europe and its benefits. 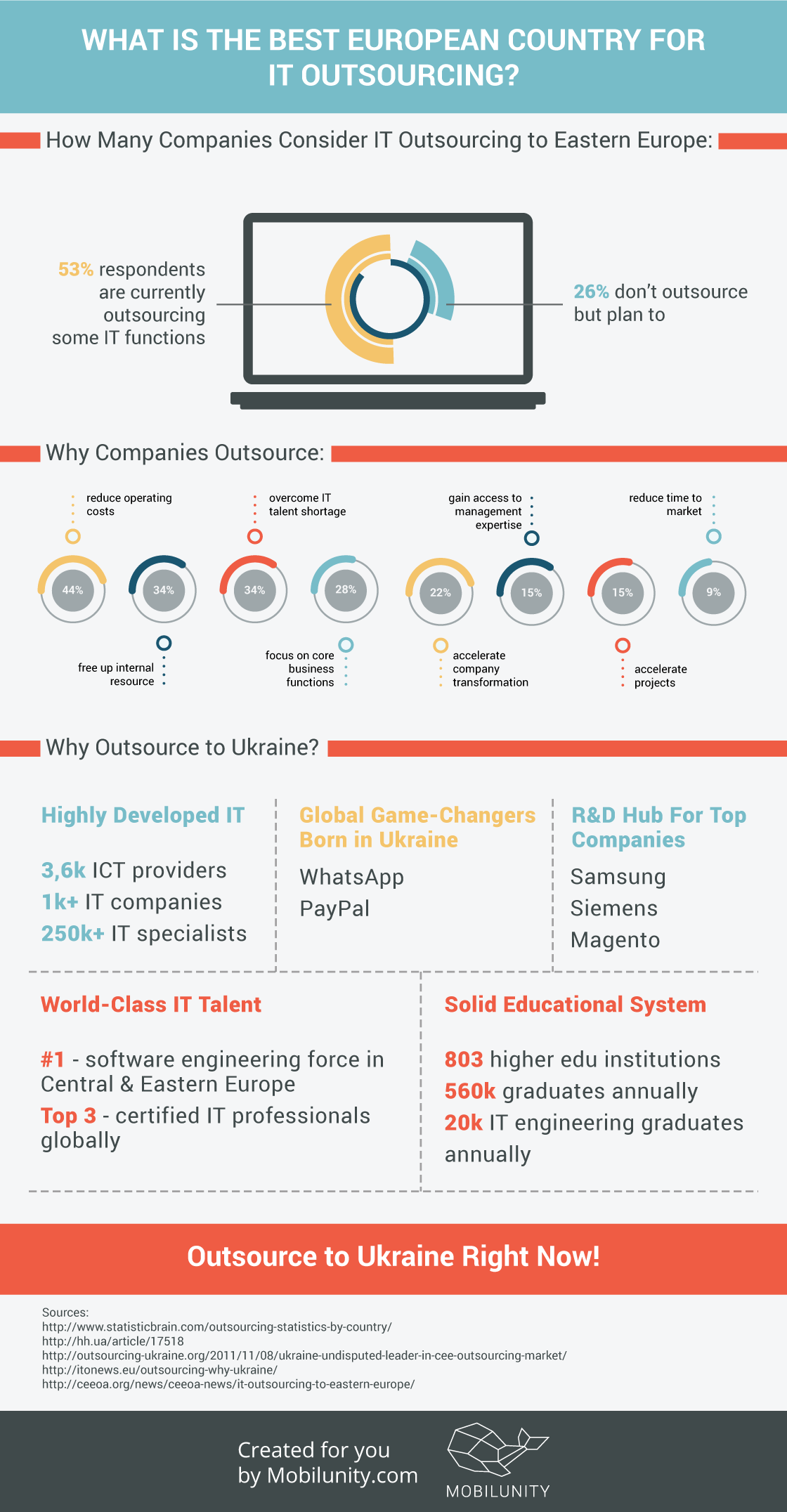 Ukraine as a Heart of IT Outsourcing Eastern Europe

It goes without saying that Ukrainian IT companies are mainly working with the clients who are looking for partners in outsourcing in Europe. Ukraine has approximately 4000 IT companies, 85% of which are small and medium companies with less than 80 employees on board. Besides that, most of them are located in larger  cities of Ukraine like Kyiv, Kharkiv, Lviv, Dnepropetrovsk and Odessa. Below, you can see that almost 45% of the companies are located in the capital city of Kyiv.

Recognition for Ukraine’s IT prowess  is growing. Since 2011 Ukraine has achieved a lot, and it seems as though it will continue achieving accolades within the immediate future:

Still Not Impressed about IT Outsourcing Europe?

There are many clients considering working with European outsourcing companies, but still having doubts. Especially Ukraine :) Don’t be afraid. We don’t bite. Take a look at myths about outsourcing to Ukraine and be sure that you are doing all right. And Mobilunity will help you with that! Our team leasing service is eager to offer you all-in-one IT assistance with any aspect of startup outsource development Europe you may need, our services include:

We guarantee smooth communication and final satisfaction with every project. Check our portfolio for more details and don’t hesitate to leave your quote request – we will get back to you within 12 hours.

Ready to start outsourcing to Eastern Europe? Contact us today and will find the solution you are looking for!

Why Your Company Needs to Hire Full Stack Java Developer