Owing to the proliferation of mobile devices and the subsequent surge in the use of mobile applications to perform a growing number of essential tasks, the mobile app development industry has now become very business-friendly and web app programmers have become very demanded. Whereas previously, developers who wanted to create a mobile application that can run on different mobile operating systems needed to code using a different programming language for every platform, there are now a large number of technologies that enable cross-platform mobile application development from just a single codebase. As a result, these technologies have made mobile app development both significantly faster and more affordable.

Sencha Touch, now a part of ExtJS, is a JavaScript framework that takes on a different approach to mobile app development by allowing the creation of web applications that look and behave like native mobile apps. In this article, we take a look at this technology in greater detail.

Every Sencha Touch Developer Should Know

Created in 2010, Sencha Touch is a JavaScript UI library that enables developers to quickly create mobile-focused web applications that look and feel like native mobile applications, complete with native-looking UI elements. In 2015, it was merged with ExtJS, a larger product of Sencha that allows the creation of cross-platform web applications that can be optimally viewed from any device, be it a mobile phone, desktop, or tablet.

The framework is different from other mobile application frameworks in that it allows the creation of mobile web applications that behave like mobile apps, but can be viewed from the browser instead of requiring installation from the mobile app store. Effectively, it provides developers with a highly comprehensive library of UI components such as buttons, navigation and menu components, search and filter forms, calendars, and charts. It also provides its rich set of Sencha Touch themes, as well as its own user interface assembly system called grids, to make its web applications look and perform like a native mobile application with minimal lines of code. What’s more, its comprehensive documentation provides a great source of Sencha touch tutorial materials for every developer.

Note, however, that being a mobile web app framework, Sencha Touch provides only the frontend layer of a mobile application, so it will have to connect with some backend data source. For this purpose, Sencha Touch and ExtJS provide a high level of abstraction, so that developers can easily connect their web app to any backend architecture.

Sencha claims to have over 10,000 customers worldwide, most of whom are ExtJS and Sencha Touch users, including over 60% of Fortune 100 companies. Among its most prominent clients are Accenture, Verizon, Walmart, Symantec, and Seagate. According to BuiltWith, its largest market are in the United States, Germany, UK, Spain, and France.

We have taken a look at PhoneGap, another popular mobile application framework, on our blog, which can be also useful for PhoneGap developers. Let’s compare the Sencha Touch framework and ExtJS with PhoneGap and see where they differ. 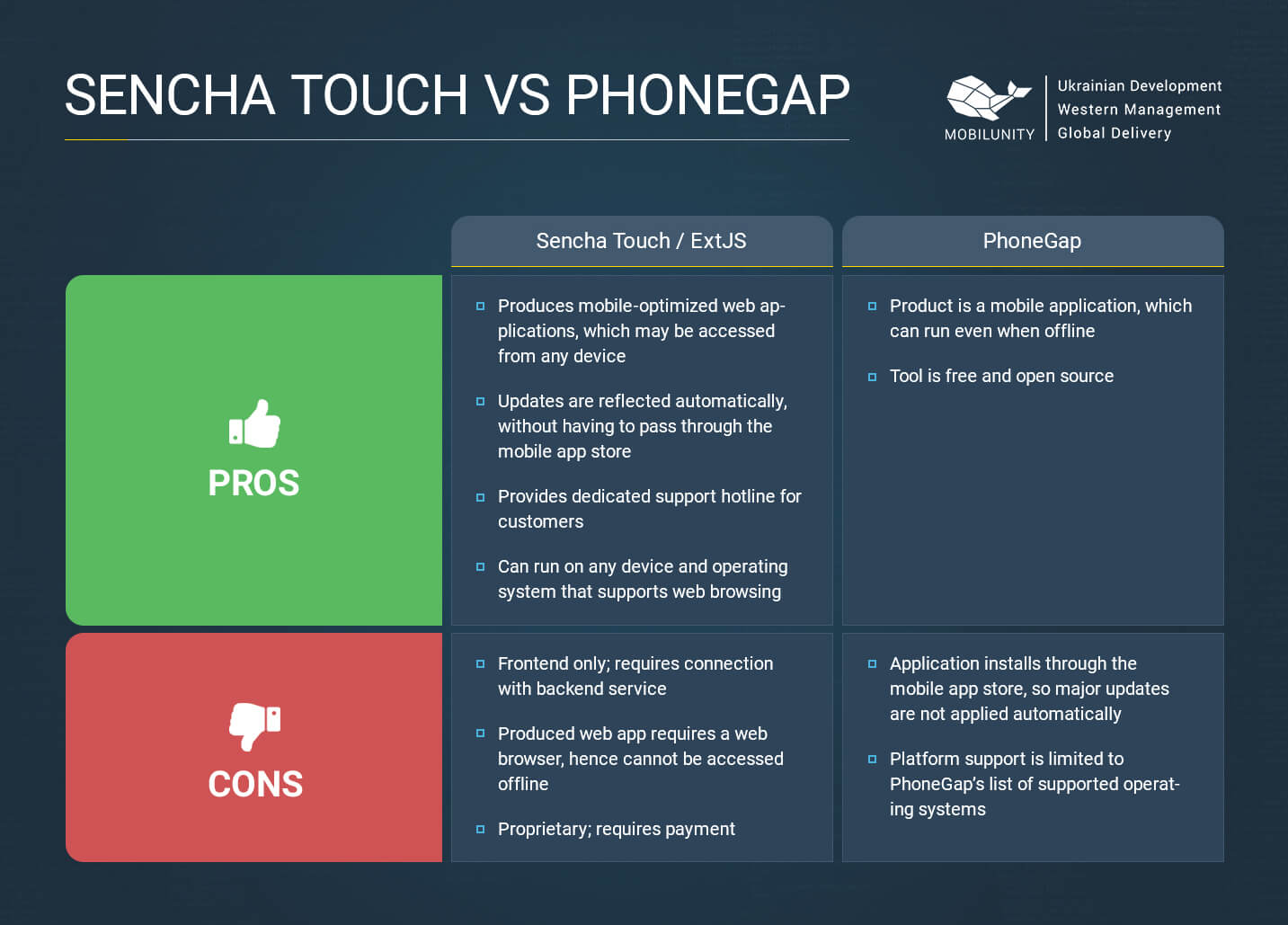 For those who are looking to use the Sencha Touch platform for their next mobile-ready web app, hiring a Sencha Touch developer will be the first step. Sencha provides several tools and technologies available to Sencha developers to maximize the performance and capabilities of the web applications they will create. It is important for a Sencha developer to be familiar with these tools in order to get the most out of the framework. Among these tools are:

There are many ways by which you can hire a Sencha mobile developer, but arguably the most practical way is to hire a dedicated remote mobile developer Sencha. Let’s look at some of the reasons why.

Hiring a dedicated remote developer is typically one of the cheapest methods of availing Sencha development services, especially if you hire from countries that have a low cost of living, such as Ukraine. Moreover, hiring dedicated remote developers eliminates the need to allocate physical resources like office work stations, dedicated computers, and software licenses. In addition, providers of dedicated developers usually pay for their developers’ taxes, insurance, and other additional expenses, so you won’t have to worry about those fees.

When you hire dedicated Sencha Touch developers, they will remain in their company’s premises but will report directly to you and will work for you full-time. You can therefore closely monitor their progress on a regular basis, and you will have full control over your developers, just as though they were physically working in your office.

Hiring dedicated developers allows you to easily add or remove developers from your team as your project requirements change. This eliminates the hassle of dealing with long-term contracts that are mandated by some governments, thus giving your project full scalability and allowing you to maximize cost effectivity.

Let’s take a look at an actual example of a Sencha Touch developer resume in order to give us a clearer picture of the common background and skills of ExtJS and Sencha developers. 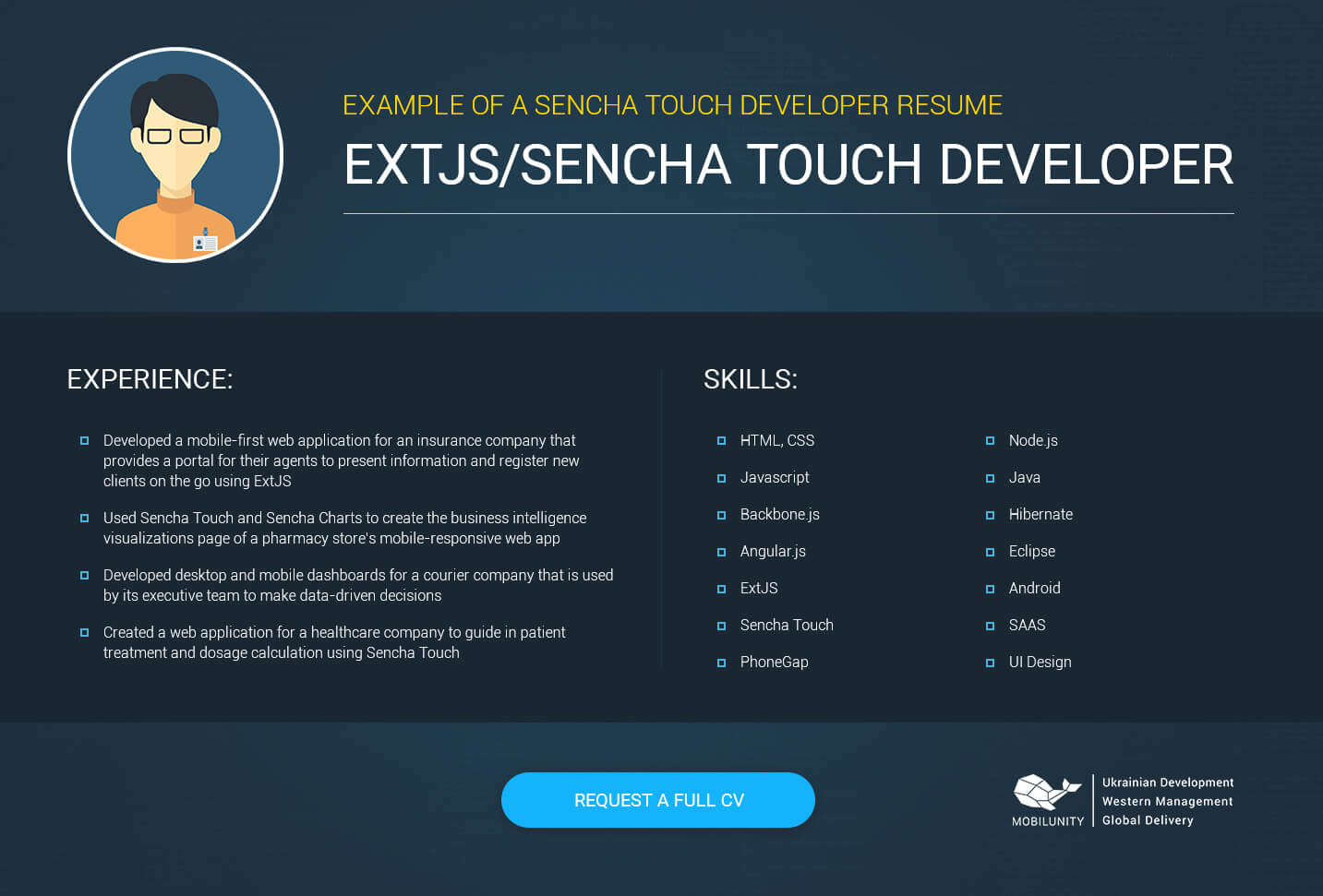 Sencha Touch is a JavaScript library that’s part of the ExtJS framework, and together, they enable web developers to create fully responsive web applications that run smoothly on mobile phones and behave like native applications. We have seen the benefits of using this framework, and some tips on the best way to hire Sencha Touch developers. Having all this knowledge, you’re well-equipped to hire Sencha mobile developers!

For all your developer needs, we’re here to give you the best bang for your buck. Here at Mobilunity, we house Europe’s best and most highly skilled dedicated developers who can utilize Sencha Touch and ExtJS to their full potential to create the perfect web application for you. Located in Ukraine, we not only have excellent developers, we also offer incredibly low rates. When you hire from us, you’re guaranteed to get your money’s full value.

Reach out to us and let’s find you your ideal Sencha mobile developer for your next cross-platform web application.

What Will It Cost for You to Hire Developers in Netherlands?

How WebRTC Development Can Be Useful for Your Business