Home /  Blog / We Do /  Why Kendo UI Developer Is So Demanded

Why Kendo UI Developer Is So Demanded

Whereas desktops and laptops used to be the main machines that people used to get online and browse content from the Internet, there are now a plethora of devices that can be used for this purpose. Mobile phones, tablets, gaming consoles, smartwatches, and a number of other devices have become commonplace among today’s crowd. These different devices, which come in different sizes and form factors, are able to connect to the Internet through applications and web browsers. While these are great innovations that are extremely useful to consumers, the great number of platforms and devices can also become troublesome, especially to developers and application owners to whom every new device adds to their growing list of devices to support.

Thankfully, there now exist a number of tools that enable web app developers to develop web applications that can adapt to different screen sizes, hardware configurations, and operating systems. Such tools make the cost of creating web apps exponentially cheaper, so such tools are as much for developers as they are for business owners who wish to create cross-platform web apps to expand the reach of their business without breaking the bank.

In this article, we take a look at one such tool that enables cross-platform web development: Kendo UI. 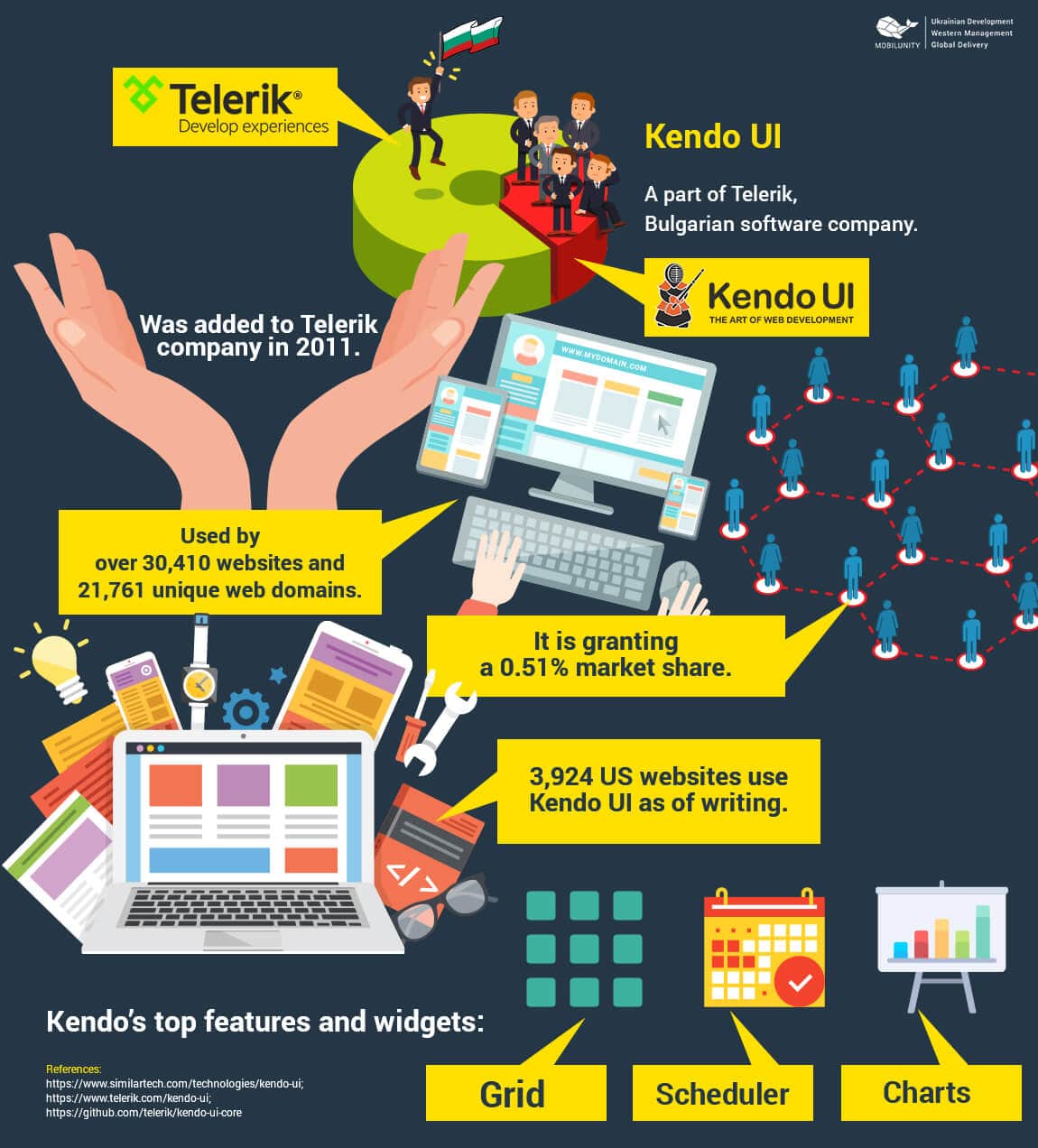 Kendo UI uses an open core model. Effectively, this means that it keeps the codebase for the core functionalities of the tool as a free, open source distribution that is publicly available. Some specialized features, however, are only available in Kendo UI Professional, the product’s full, proprietary version that contains the complete set of Kendo UI functionalities.

Kendo UI enables the rapid creation of beautiful cross-platform web applications using JavaScript and HTML by providing its own library of over 70 customizable user interface components and widgets. It supports all types of devices of varying screen sizes, such as mobiles, tablets, desktops, and laptops. Moreover, it supports a wide range of JavaScript frameworks that developers can use for development with Kendo UI, such as React, Vue, and Angular. Developers can therefore use Kendo UI JavaScript, Kendo UI Angular 2, or even the latest Angular 5 update. Here are some of Kendo’s top features and widgets:

Kendo UI’s Grid widget is a convenient tool for data representation and tabulation that creates powerful tables with a comprehensive set of capabilities, which include:

Among Kendo UI’s most highly demanded features is its Scheduler widget, which is essentially a digital planner and schedule organizer that allows users to keep track of, and visualize, their schedules. This widget supports the standard daily, weekly, and monthly views, as well as specialized views like multi-day, work week, timeline, and agenda views. The widget also supports multiple time zones and allows keyboard navigation.

Kendo UI’s Chart functionality is an incredibly comprehensive and fully-featured data visualization tool. It supports a large number of commonly used chart and graph types such as line and bar graphs, pie and bullet charts, and scatter plots, among many others. It also supports the use of several data types such as numbers, categories, and dates, and even features chart animations. Moreover, the charts are rendered on the client side to maximize the performance.

Kendo UI developers, as well as Sencha Touch developers, can really come in handy for creating a perfect mobile application. For any business that’s planning to include the use of Kendo UI in their application development strategy, hiring great Kendo UI developers and designers will be the key to success. A Kendo UI designer is in charge of conceptualizing and laying out the appearance, colors, themes, and arrangements of all the user interface components of your web application in order best represent your brand and deliver the best possible user experience. A Kendo UI developer is then the one responsible for the actual implementation of this design, making use of whatever JavaScript frameworks and additional tools to maximize coding efficiency, and adhering to industry standard best practices to maximize code maintainability.

Several Kendo UI tools are available for both developers and designers to maximize their productivity. Here are some of the tools that a great Kendo UI developer or designer should be familiar with.

Kendo UI’s Theme Builder tools offer developers and designers a very convenient and quick way to style and design the appearance of a Kendo UI application. These tools come in two flavors: the standard Kendo UI Web Theme Builder, which offer tools for creating general themes and styles for any platform, and the Kendo UI Mobile Theme Builder, which focuses on the creation of mobile-specific themes and designs. These two tools provide a drag-and-drop user interface for theme creation, and the end product can quickly be exported and imported into any existing Kendo UI project.

The Kendo UI Dojo environment is a tool that enables rapid testing and prototyping of Kendo UI apps. This tool allows developers to quickly copy-paste Kendo UI code snippets onto the environment’s editor and run the code to quickly view a rendering of the said code. This powerful coding environment even gives developers access to some common IDE features such as autocomplete, line numbering, automatic bracket closing, automatic highlighting of matching tags, and smart indentation. Moreover, it allows developers to choose which Kendo UI version to run the code against to ensure maximum compatibility.

The Kendo UI Chrome Inspector is a browser extension for Google Chrome that developers can install on their Google Chrome browsers, allowing them to extend Google Chrome’s DevTools to include Kendo UI elements and features. Upon installation, this extension gives developers the power to inspect different Kendo UI framework and widget components, debug the execution of various Kendo UI-specific JavaScript codes, and generally troubleshoot bugs and problems from any website that uses the Kendo UI framework.

Kendo UI is an excellent tool that enables the creation of beautiful and high-performing cross-platform web applications that adapt to different screen sizes and operating systems. We have examined some neat features of the framework, as well as some tools that competent Kendo UI developers and designers must be able to use. Hiring Kendo UI developers and designers will now be your next step towards quickly creating your ideal website.

If you’re in the market to seek a Kendo UI developer wanted for hire, then you’re in luck! We are Mobilunity, a Ukrainian company that provides excellent and remarkably talented dedicated developers and designers who are skilled in using Kendo UI and many other frameworks for web development. Not only do we boast of having among Europe’s best developers and designers, we also offer one the lowest and most affordable rates anywhere in the continent. For all your web app and mobile app development needs, we are your perfect business partner.

Contact us now and let our Kendo UI developer help you build the perfect mobile web app in no time.

Mobilunity Becomes a Global Leader in IT and Business Services According to Clutch.co

Does Remote QA Engineer Work More Productive than In-house One?