Home /  Blog / IT Staffing /  What Will It Cost for You to Hire Developers in Netherlands?

What Will It Cost for You to Hire Developers in Netherlands?

The Netherlands has experienced strong economic growth the past couple of years and is among the most wired countries in the world, meaning a lot of its population is connected to the internet. Although this makes the Netherlands seem like an ideal candidate to get IT services, it has been reported that the country actually has a shortage of IT professionals, and owing to its close financial ties to the United Kingdom, it’s among the countries most affected by Brexit. Analysts therefore expect the Netherlands to experience subsequent heightened inflation and increased insolvency for businesses in the coming years.

The question, then, is: would it be a wise decision to hire developers in the Netherlands?

According to BuiltWith, which analyzes the technologies used in websites from different countries according to the URL suffix, the programming languages and frameworks most used by websites ending in .NL (for Netherlands) are PHP, ASP.NET, and Ruby on Rails, while the most used JavaScript library is JQuery. 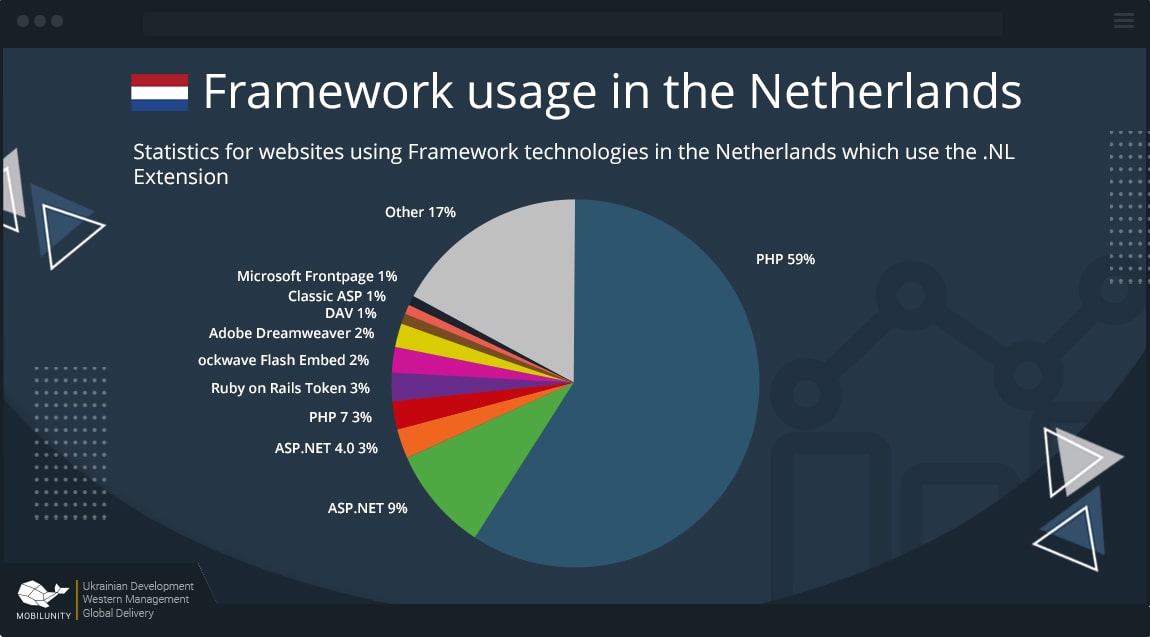 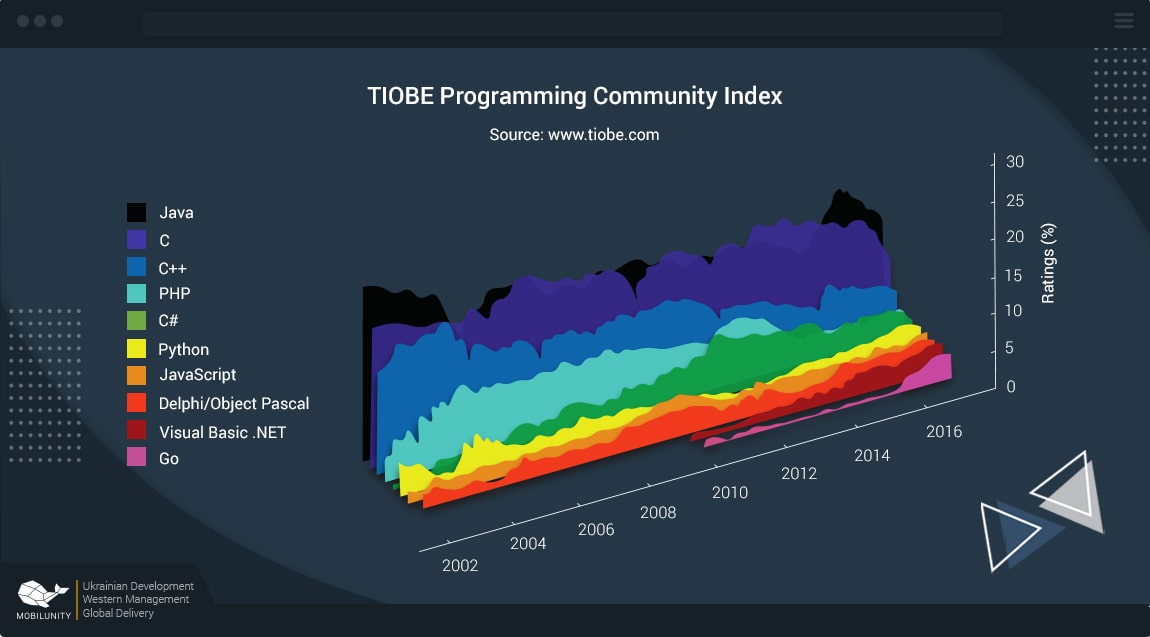 The in-demand technologies in the Netherlands are definitely matched by developers around the world, so the possibility of outsourcing and/or offshoring development services to other countries may come into consideration.

According to the Centre for the Promotion of Imports in Europe, the Netherlands is among the European countries that demand development outsourcing and offshoring services the most. Due to the shortage of IT services in the Netherlands, more and more companies are opting to outsource or offshore their development services to other countries.

According to British consultancy company Consultancy.UK, the demand for IT outsourcing and offshoring in the Netherlands is exhibiting strong growth and is expected to continue growing. As of 2015, 49% of Dutch companies plan to outsource IT services more, while 36% plan to retain their current IT outsourcing arrangements. Among the respondents, the top reasons for outsourcing are to focus on the core business and to save on costs.

Meanwhile, within development departments, the area that companies plan to use offshoring/nearshoring services the most is application development, maintenance and testing. 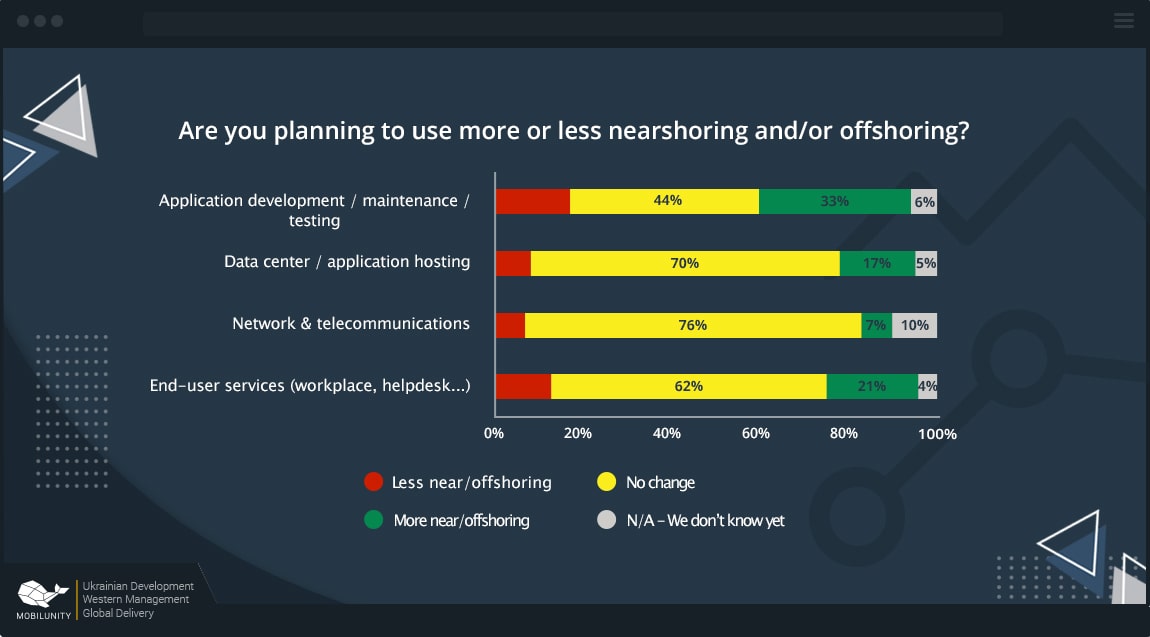 Offshoring and nearshoring plans of IT departments within Dutch companies, taken from Consultancy.UK

We have explored the cities in the Netherlands with the highest demand for Dutch developer for hire and compared the average salaries in each to help those looking for a Netherlands dedicated team.

Rotterdam is another big player on the IT scene. With 2,281 Dutch developer job postings or 15.8% of all IT job postings in the Netherlands on PayScale, it has the second highest demand for IT professionals in the country. Developers from Rotterdam have an average annual software developer salaries in Netherlands of €41,642 ($47,478).

Not far behind Rotterdam is Utrecht, knows as the “beating heart of the Netherlands’ life sciences and health industry”. It has 2,199 IT job postings on PayScale (15.2% across all of the Netherlands) and Utrecht developers for hire have an average annual salary of €37,259 ($42,481).

Known for its huge investments in fiber optics for high bandwidth internet connections, the Hague is another city with a high demand for IT professionals. It has 2,109 IT job postings on PayScale (14.6%) and a web developer Hague has an average developer salary in Netherlands of €40,023 ($45,632). 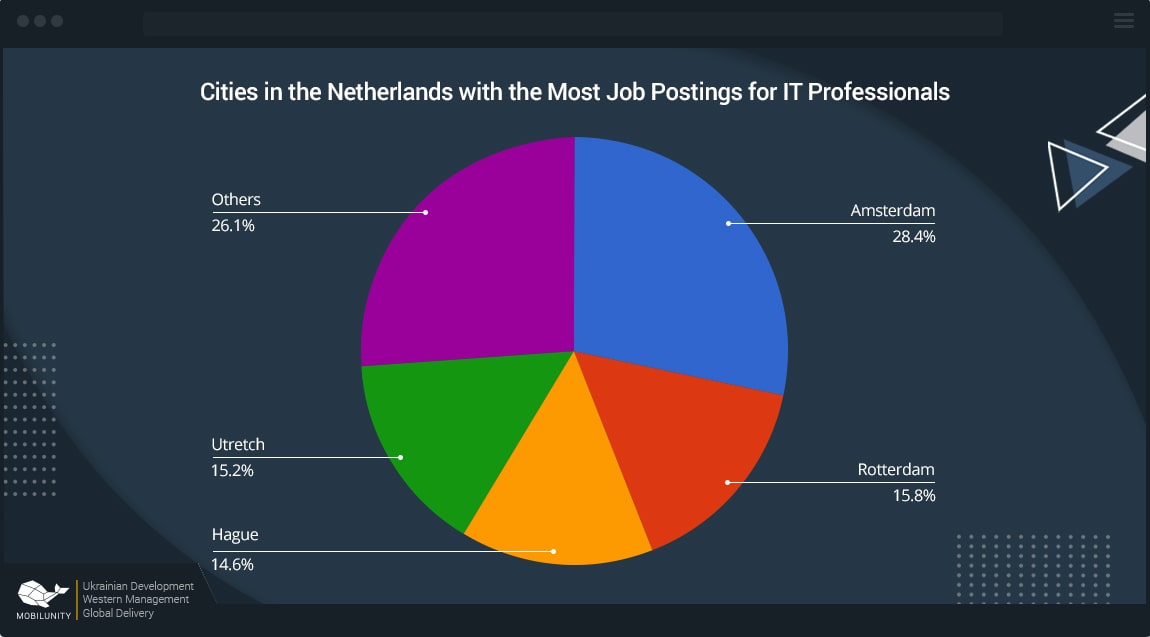 The Most Popular IT Companies Outsourcing in the Netherlands

It’s not a surprise that the demand for IT talent for outsourcing in Netherlands is constantly increasing. Large software development companies in Netherlands are ready to propose a great offer in order to win their specialists, especially in the country, where more than six hundred international IT corporations are located, one-third of which has its headquarters in the capital of the Netherlands. World name companies have their headquarters in Amsterdam, including Uber, Google, Netflix, and Cisco.

The key factors why Amsterdam occupies a top position in the list of the main destination goals for outsourcing companies in Netherlands are easily explained. In comparison with other European countries, the Netherlands has a high level of secondary and specialized education. In addition, the location of the country allows you to reach all major centers of Europe in 2-3 hours. English is one of the main languages in the country, and more than 90% of residents speak it fluently. At the same time, thanks to the high internet and fast access to the introduction of new technologies in this city, you can easily experience new technological products.

What are other companies and corporations that consistently choose the Netherlands when it comes to the location of their offices and enterprises in Europe?

All three cities are on the top list of entrepreneurs in Europe are in the Netherlands – and these are Amsterdam, Eindhoven, and the Hague.

Not Enough Technical Talent in the Netherlands?

Unfortunately, it’s true. Amsterdam, the capital of the Netherlands, has a strong shortage of IT talent. At a time when the demand for technical specialties is growing annually, the number of specialists within the country does not increase at all. According to the Amsterdam Economic Board, the need for personnel has increased to 26 requests for vacancies per freelance web developer Netherlands in the market.

Usually, part of the vacancies cannot be filled by Dutch specialists, so the companies have to look for and hire specialists from other countries. In this case, recruitment and lack of staff are some of the most pressing problems on the market when it comes to IT development companies in the Netherlands.

In the past three years, 20 percent of entrepreneurs in the Netherlands have experienced problems in the lack of specialists and have indicated this as a major obstacle in the expansion and development of the programming sector. So, what could be a solution to this experts shortage problem?

Is It Reasonable to Look for Young Specialists in Ukraine?

As mentioned earlier, Amsterdam has long been an explored location for outsourcing in Netherlands and housed the top companies in the IT field. This is what introduces a number of positive and negative factors that should be considered before choosing a place for your startup or outsourcing software development.

No surprise that many smaller enterprises tend to pay attention to other European countries to locate their business there. If we compare the Netherlands and Ukraine as countries with a potentially growing IT market, we can find that economically, Ukraine has an advantage in potential over the already stable and strong country-based markers. Here are just a few points to consider:

To compare outsourcing in Netherlands with other countries, including Ukraine, let’s take a look at the average salary rates in each land. For instance, here are Java developer salary Netherlands versus foreign rates:

As you can see, the rates of web developer salary Netherlands are above average for Western Europe. What is more, if look at Ukrainian specialists, their salary rates are below average; still, Ukrainian developers are well-known experts on the global market.

Should I Hire Developers in Netherlands?

It would therefore be much more practical to hire dedicated developers from Ukraine, as doing so will net you enormous savings. A dedicated teams provider like Mobilunity, which is based in Ukraine, is an excellent option because we provide developers with top-notch skills at incredibly affordable rates.

Contact us now to hire the best developers and start saving!

Business Process Outsourcing: Why It’s Thriving and Why You Should Get On Board

Does remote team affect your business cybersecurity? The greatest misconception