Home /  Blog / IT Staffing /  SAP ABAP Developer and What Do They Are Needed For?

SAP ABAP Developer and What Do They Are Needed For?

System Application Process (SAP) is an enterprise system programming language developed by SAP SE, a Germany based European Corporation. It is extensively used by the large corporations and enterprises for managing their enterprise resources and business processes. An expert SAP consultant can guide any kind of organizations on how to use this server side platform to run businesses more efficiently and smoothly.

The SAP offers numerous business solutions to the customers, such as SAP Leonardo, SAP HANA, SAP S4 HANA Cloud, and SAP Cloud. The SAP Company also introduced a high-level application development language known as SAP ABAP programming. The SAP ABAP development is getting full scale attention from the large and medium sized organizations on their existing server-end resources of the SAP platform with the help of SAP ABAP Developers that are easily available in the marketplace.

With the increasing demand of SAP programming, the SAP ABAP consultant salary is also increasing rapidly in the market. The average salary of an ABAP programmer salary in the USA, according to the PayScale information, stands at about $85,159 per annum, which is a little higher than the other web and application developers in the marketplace.

Let’s expand upon different aspects of ABAP development and the ABAP developer roles in the perspective of the global marketplace.

What Is SAP ABAP Programming?

The Advanced Business Application Programming precisely referred to as ABAP programming is high-end software development languages commonly used for the development of business applications for the SAP R/3 application server. Presently, the advanced version of NetWear platform has been released by SAP SE that supports ABAP dialog programming as well as Java programming simultaneously.  Numerous versions of this language have been released till this time, such as R/3 release 4.6, ABAP objects and others.

The ABAP language is a multiple platform language that supports, Linux, Solaris, Unix, Windows, i5/OS, Informix, Oracle, MS SQL Server, IBM DB2 and many others. The execution of ABAP code in the SAP database server is done through the execution of ABAP transaction codes, which can be invoked through GUI, command line or ABAP call transaction features. The transaction codes can be triggered through a role-based, authority-based and system-based to perform its core function in the system.

What Are the Reasons and Benefits to Use SAP ABAP Developers?

There are many good reasons of using ABAP language that provides great benefits to all sizes of the enterprises. Using the services of professional grade services of either senior or junior ABAP developer brings smoothness, efficiency and effectiveness in the management of almost all kinds of business processes commonly adopted in the modern business operations.

The main benefits and good reasons to use SAP ABAP developers for business application development include the following:

So as an enterprise, you get a lot of benefits that make you hire qualified and skilled SAP ABAP developers for your business process management.

The SAP ABAP platform is the leading ERP and business management and analytics software application platform in the world with over 350,000 clients using this featured rich platform. According to the SAP white paper, SAP system touches more than 76% of the global transaction revenue in one way or the other. The consumer purchase recorded by SAP stood at about $16 trillion in 2016.

What Countries Have the Largest Demand of SAP ABAP Developers?

According to the Information Security Buzz website information, the maximum number of SAP ABAP developer jobs advertised during the sample period of 15 days of 2013 was in the USA. There were more than 25,000 SAP jobs advertised globally during that period of study.

A huge number of over 14,000 SAP job posts, which is about 56% of the total jobs advertised across the globe was advertised only the North American region. The European region was the second most demanding regions for the SAP ABAP developers and other SAP jobs.

Similarly, according to the Whitehall Resources information, the UK, Germany and Switzerland are the hotspots of the maximum demand of SAP ABAP developers and consultants in the European region. The ABAP developer salary in these countries is also very high as compared to many other countries. The most demand modules include the banking and finance related modules in these countries.

After the integration of Java language along with the ABAP language into NetWeaver has changed the thinking paradigm of the job seekers as well as the enterprises. The demand of ABAP developers is decreasing according to the Indeed.com analysis. But, many people still believe that a large number of existing modules and different applications have already been written in the ABAP language that are not going to be swapped with the Java based applications overnight.

So, there will be a consistent demand of ABAP developers in the all countries of the world, especially in the USA, the UK, Germany and other European countries.

Ukraine has been one of the most preferred locations for outsourcing of the technical jobs, especially the jobs related to information technology. The time zone and the geographical location of Ukraine is very ideal for many companies operating in the Europe, North America, Asia Pacific and African Regions.

Both the remote hiring and in-house hiring of SAP ABAP developers has their own benefits and downsides respectively. Let’s have a comparative look at the both kinds of hiring to have a better understanding of their merits and demerits in the following table. 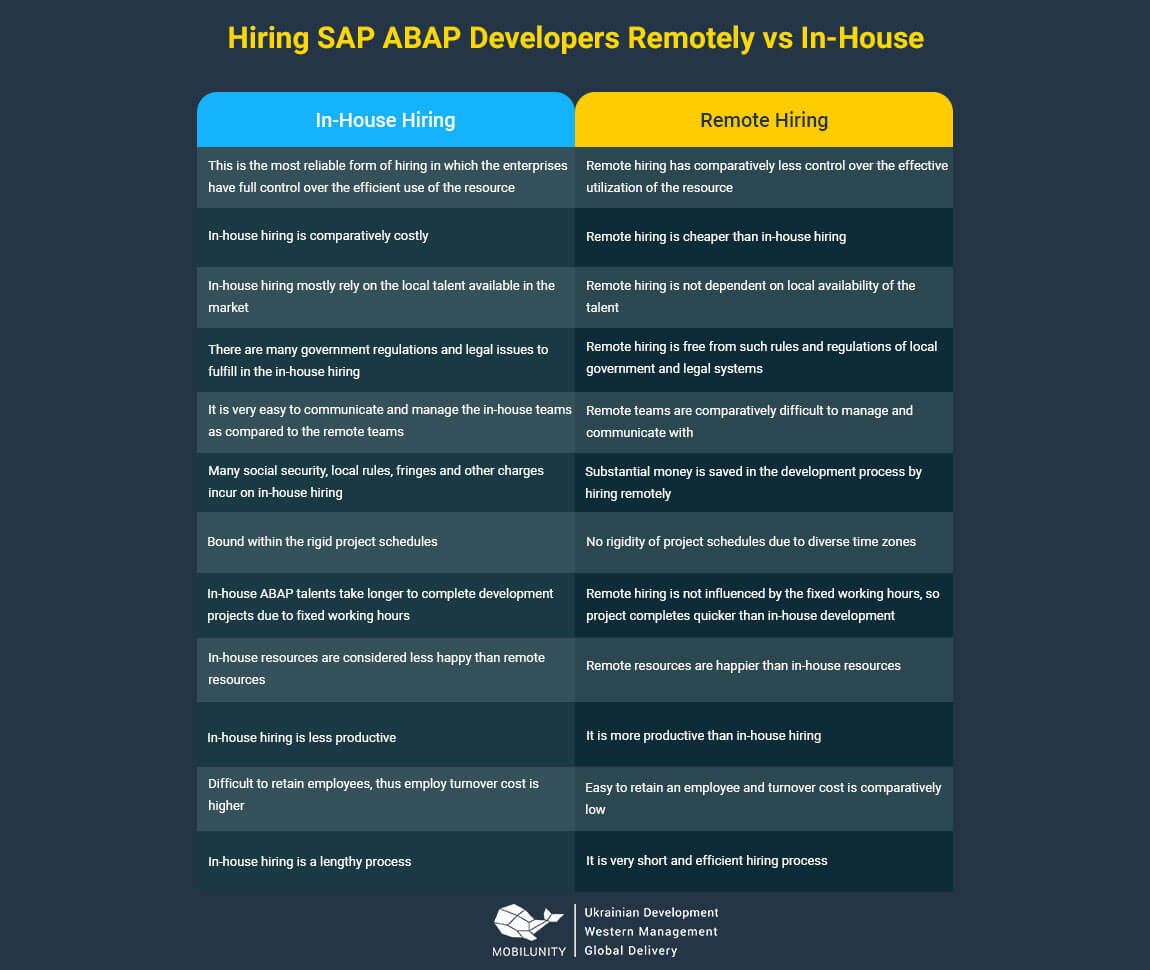 How Can Mobilunity Help in Providing SAP ABAP Developers?

Mobilunity Outstaffing Services Company is a Ukrainian provider of highly skilled, talented and qualified SAP ABAP developers to different kinds of companies operating across all over the globe. It offers dedicated ABAP developers that work dedicatedly on the specific projects assigned by the clients.

Mobilunity completes the complete hiring process of ABAP developers on the behalf of their clients in a very short period of time and provides full human resource management of the remotely hired resources at the fixed charges without any kind of hidden fees. The location and time-zone of Ukraine is very suitable for the companies located in almost all regions of the globe.

So, Mobilunity is a perfect option for hiring SAP ABAP developers remotely to save a substantial amount of money and valuable time.

How to Find the Best Software Development Company in Italy?