Home /  Blog / We Do /  How to Find a Software Engineer in Belgium?

How to Find a Software Engineer in Belgium?

Belgium employs over 95,200 employees in 2017, according to the latest statistics released in the European Union Commission report 2017. The number of employees working in the software, services and hardware sector accounted for about 45,000 employees in 2016. The average ratio of digitalization of the country is much higher than the average European digitization ratio, as per above cited government statistics.

According to the Flanders Investment and Trade report, the 20% of the ICT workforce is software developers and engineers. So, we can say that about 19,000 to 20,000 programmers and developers are working in the country in 2017.

The custom Belgian software development market is facing acute shortage of the ICT workforce. The shortage of ICT workforce in the year 2012 was about 8,000 professionals, which is expected to reach 30,000 professionals by 2020, as per the government forecast cited above. A large number of remote dedicated software development teams are also working for many software companies in Belgium.

According to the eZilon Europe information, there are a couple of dozen software related major companies operating in Belgium. According to the government statistics, there were 955,713 enterprises at the end of April 2019 with an increase of over 5,000 units. The number of software development companies was not available in the report. But, there is a substantial number of software startups, SMEs and multinational companies in the country. Those companies use the services of local developers as well as the services of any outsourcing development company for developing the teams of remote dedicated developers.

There are hundreds of SMEs and multinational software development companies operating in three major regions of the country. The main concentration of the software development companies is in the Brussels area. According to the latest global survey, Belgium stands on the 6th position ahead of France, USA and many other European countries in terms of the company’s growth potential in the country.

There are many opportunities for the software development services to grow in the country. According to the latest statistics, every fifth enterprise uses its own website and mobile apps for online outreach and business. More than 21% of the total orders are received through websites or mobile apps in the country.

Odoo is one of the fastest growing all in one management platform powered by hundreds of applications, plugins and modules. It is an open source software platform developed by the team headquartered in the Brussels, Belgium. There is huge demand of Odoo developers that has command over Java, PHP, Python, JavaScript, Do.Net and other programming expertise. Presently, more than 3 million users use this platform for their business growth.

Enterprise resource planning is one of the major tools commonly used in many kinds of business including, finance, insurance, banking, manufacturing, retails, sales, pharmaceutical and many others. The banking, financial services, insurance and manufacturing are the major sectors of the country. So, the demand of ERP platforms is very high in Belgium. The major technologies involved in the ERP development include, Java, Dot.Net, MySQL, C, Python, PHP and others.

According to the government statistics cited above, more than 15,000 shops use eCommerce platforms for their online shopping solutions. More than 21% of the total purchase is done through online websites. So, the demand of eCommerce platforms will remain very high for many years to come. The major technologies involved in the eCommerce platforms include, WordPress, Joomla, Magento, HTML5, CSS3, JavaScript, MongoDB, Java, PHP, Python, and others.

Flemish Brabant is one of the three top regions for industry and information technology. This region is considered as the engine of innovative and creative ideas for software and other ICT related businesses. The demand of software developers is high in this area.

The comparison between hiring dedicated developers remotely and local hiring is given below. 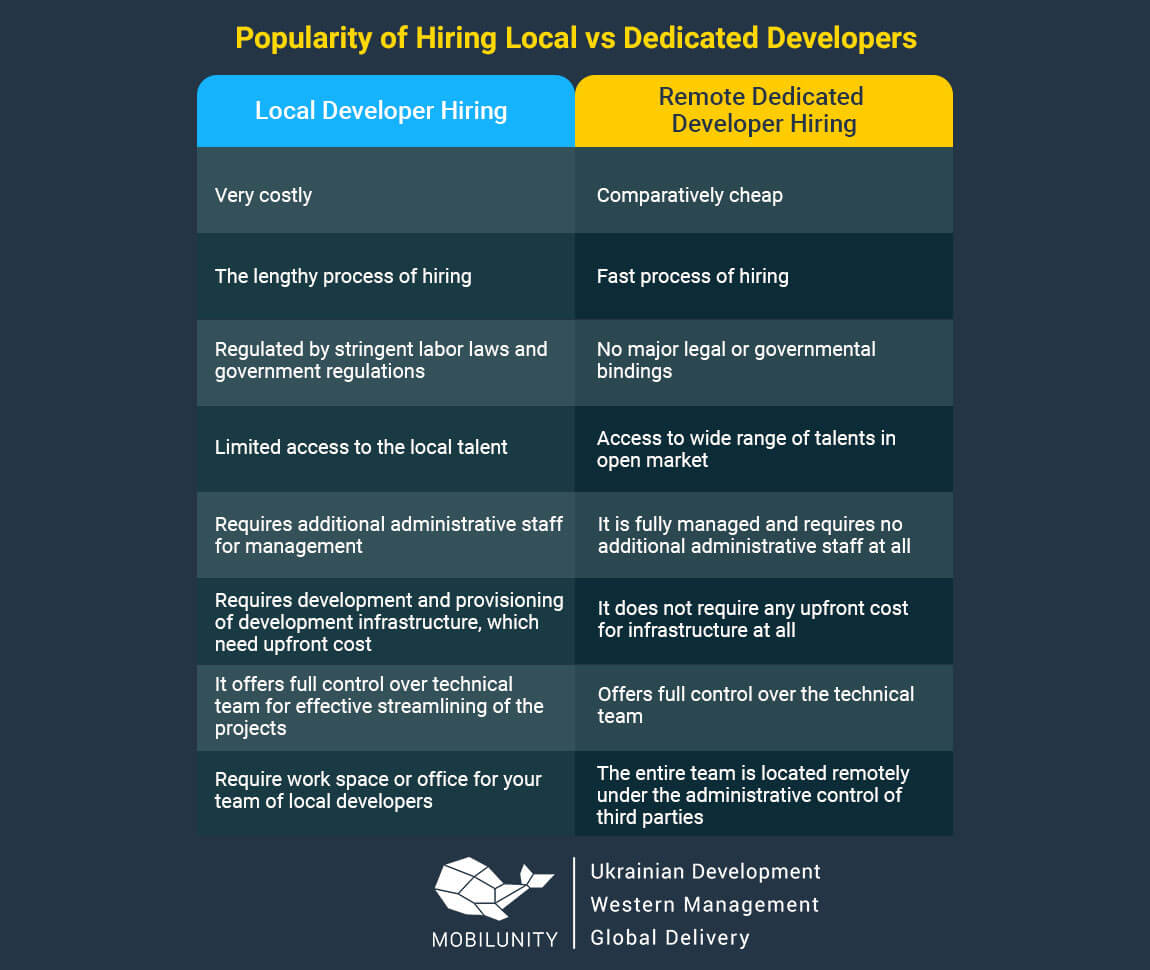 The average salary for hiring software and app development professionals is comparatively high in the region. So, many local firms prefer to hire the services of a software development outsourcing company rather than hiring the local software Belgian developers. 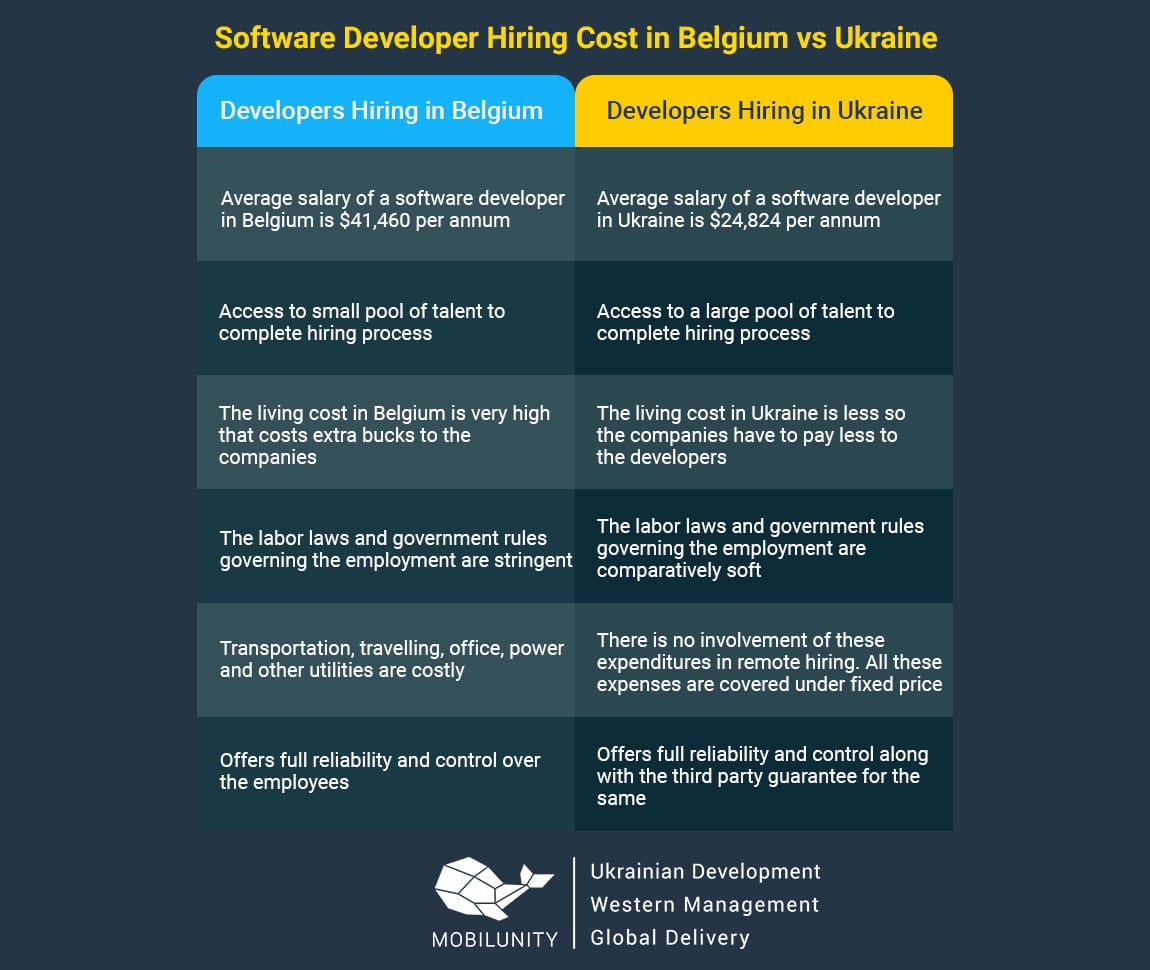 Why Hiring Dedicated Developers from Ukraine Is a Great Option?

Hiring dedicated developers from Ukrainian companies like Mobilunity software development service provider company is a great option due to the following main points: