The demand of Near Field Communication Technology precisely referred to as NFC technology has emerged as one of the powerful drivers of the demand for the Android NFC developers to create a large number of NFC apps. Thus, the Apple developer NFC technology along with the Android development technology is disrupting the IT field.

What Are Android NFC Developer and NFC Technology?

The importance of Android NFC developer is very high in leveraging the NFC technology, which is one of the disrupting technologies extensively adopted in the home automation, digital access control, physical access security, and the internet of thing (IoT). Let’s have a look at different perspectives related to the NFC wireless technology and the Android NFC development.

The NFC technology is a wireless technology, which transfers the data between two NFC enabled devices like mobile phone, tablets, card readers or others without any formal configuration. The data transfer between the two devices wirelessly when one is brought in proximity to the other one. Let’s figure out features and capabilities all about NFC technology here:

Which of the following items in your pocket uses NFC technology?

The simple answer to the above question is that almost all of the above-listed devices use the NFC technology for the contactless transaction of digital information. There are many other industries that also use the power of NFC wireless technology. Among such fields, air ticketing, home automation, industrial automation, contactless digital access, logistics, and e-wallet payment are a few to name.

According to the Markets and Markets® forecast, the total size of the global NFC market will reach $21.84 billion by 2020 with over 17.1% CAGR growth. Similarly, the Statista predicts the global market to reach $47.3 billion in 2024 with the double-digit growth in the future.

Apple has opened up the digital payments through NFC transactions in recent years. A huge number of Android phones are already using contactless digital payments. The total volume of mobile-based peer to peer transactions is expected to cross $244.04 billion by 2021 in the USA only. It will consistently maintain a double-digit growth for many years to come.

There is a huge growth in the demand for the NFC tag programmers and the NFC card programmers in the fields of access control, digital payment, secure data transaction, and healthcare application development and integration. All these indicators point to the bright future of the NFC technology as well as the NFC Android app developers.

According to the Mobile Payments Report, the total global volume of in-store mobile payment is expected to cross $503 billion by 2020. The growth between 2015 and 2020 is expected to remain over 80% CAGR. The total volume of in-store payments in the US only will cross $128 billion by 2020, with over 40% compound annual growth CAGR between 2017 and 2020.

The majority of the in-store payments are done through NFC mobile applications. The NFC can be used in three major modes – reader/writer, peer-to-peer and card emulation – in the Android mobile app development. An NFC Android mobile app is an Android app that is customized by introducing some changes and additional features in the app code. The main activities you should check before you hire NFC developer include:

What Technologies Are Used for NFC App Development?

The following major technologies are used for the development and operations of the NFC mobile applications.

Who Is the Leader of NFC Technology?

The NFC technology is very widely spread in different domains such as NFC hardware, NFC software, NFC data, NFC network, and others. There are many NFC technology leaders in the marketplace. So, let’s have a look at who leads in what?

The NFC is an electromagnetic based wireless communication technology, which can easily be implemented in both the Android and iOS products. As far as the application development is concerned, they are different in terms of different factors such as app configuration, coding, implementation, analytics, accessing and operations. Let’s figure out the major differences between Android NFC developers vs iOS NFC developers in the following table. 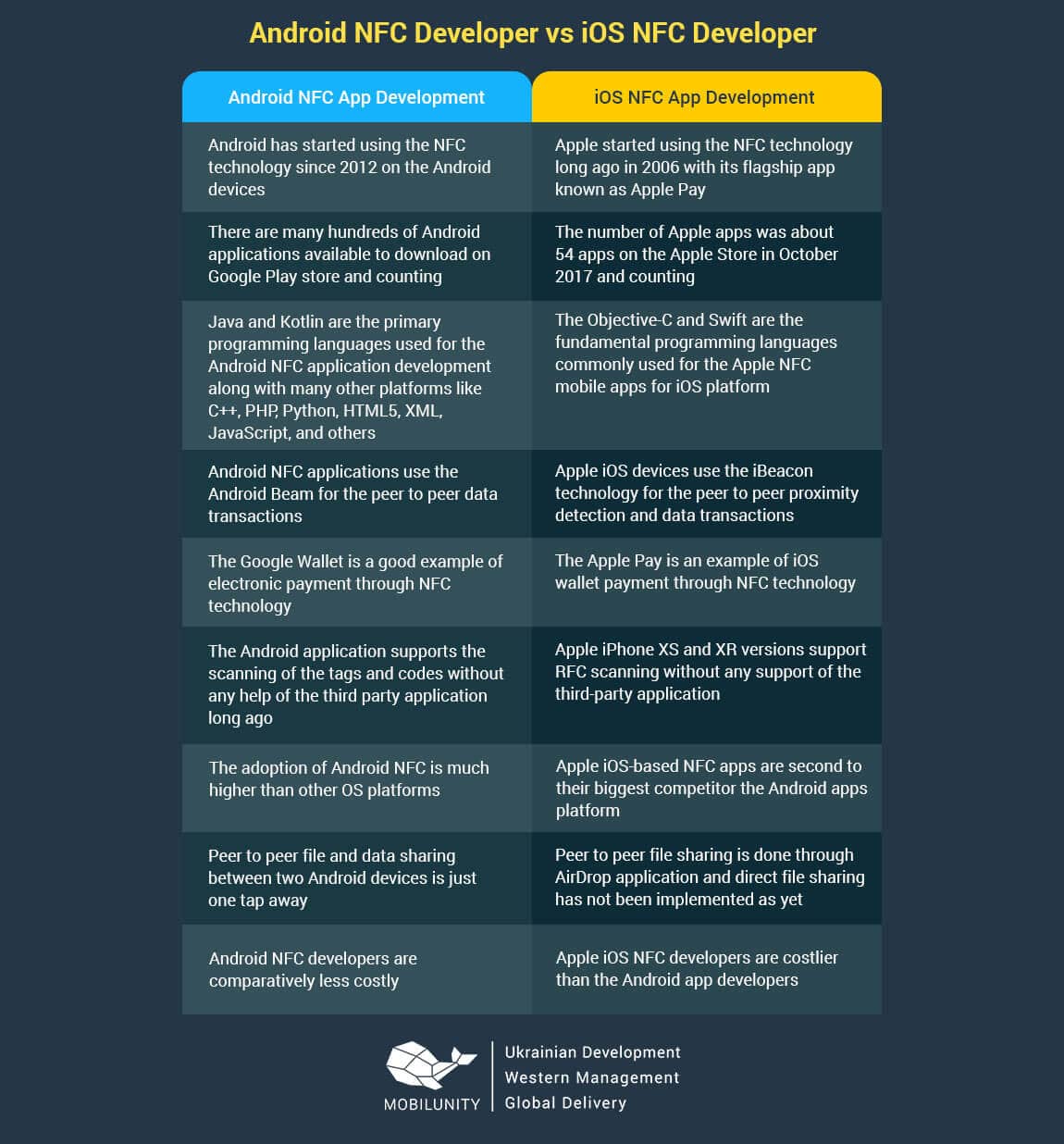 The Sample of a Middle Level NFC Developer Resume

Other than personal information and bio-data, a good resume of a middle-level NFC software developer for Android application should have the following technical skills, professional work experience, and academic qualifications. Let’s figure out the major skills, qualifications, and experience of a good sample of middle level NFC developer resume.

The demand for the skilled and experienced NFC Android developers is very high in the market. It is a hard task to find the right developer to complete your Android app project successfully. The Mobilunity software development service offers you the professional grade NFC Android app development services that you deserve for. The Ukrainian based software company is able to offer you:

Contact us now for getting the services of highly skilled and experienced NFC developers to work on your Android or iOS app development projects remotely!

How Much Does It Cost to Hire a Data Scientist? Salary Comparison

Software Outsourcing: How to Make It Right